Belgian action star Jean-Claude Van Damme returns in "Black Water," a mediocre submarine thriller that only really comes to life when co-star Dolph Lundgren gets to one-up the Muscles from Brussels. Van Damme and Lundgren have worked together five times now since 1992, when the two '80s icons traded blows and bullets in the first "Universal Soldier" film. Not much has changed in 26 years since Lundgren, playing a berserk cyborg antagonist, stole that earlier film, too.

Lundgren stands out in both films because he doesn't have to carry either project. He grins like a cat who figured out how to get a lifetime supply of canaries while Van Damme grimaces as he struggles to carry a blase, paint-by-numbers siege narrative about (deep breath) a rogue CIA agent who must fight both the CIA and evil mercenaries for the security of digital files that contain the names and personal info of the CIA's active undercover agents. Unfortunately, Van Damme barrels his way through another uninspired programmer, leaving Lundgren with the impossible task of breathing life into an already burst balloon.

Lundgren plays Marco, a mysterious German spy that Wheeler bumps into after he wakes up in a blacksite prison...on a submarine. Marco is cool and resigned to his fate while Wheeler is groggy and pissed-off. Marco also never directly answers Wheeler's questions, but rather sighs about the seeming hopelessness of their shared predicament. So it's up to Van Damme to set up the plot through an extended flashback: he was attacked by a group of bad dudes who cornered him and his partner Melissa (Courtney B. Turk) at a seedy motel. Soon after that, Wheeler was captured by the CIA—led by Agent Patrick Ferris (Patrick Kilpatrick)—in an industrial car park. The baddies from the hotel are supposed to be really bad dudes because they shoot Melissa twice (and in slow-motion) while Van Damme protests with an unintentionally hilarious groan. Soon after this inciting incident, Wheeler defies Ferris's group, who threaten Wheeler with torture—including eyeball-related trauma—if he doesn't tell them where they can find the files he's hiding. There's some confusion about Wheeler's real allegiances—did he go rogue, or is he actually still loyal to his country—but that question is cleared up sooner rather than later since screenwriter Chad Law doesn't seem to care about this tired, but heavily foregrounded complication.

Law's scenario often focuses on keeping track of the various factions housed in the never-named blacksite submarine prison. There's Wheeler and aspiring/good CIA agent Cassie (Jasmine Waltz), who form a team, and struggle to escape together. And there's the suspicious security crew led by Kingsley (Aleksander Vayshelboym), and the rogue agent whose identity I won't spoil (though really, it's not that hard to guess). There's Ferris and his guys. And don't forget generic good guy Captain Dorsey (John Posey) and his hapless crew, all of whom just seem to want to keep their sub from blowing up. Oh, and Marco's there, too.

It's weirdly fitting that Lundgren, the most physically imposing actor in "Black Water," can't be found for much of the film's drawn-out 105-minute runtime. You might says he's the proverbial elephant in the underwater submersible, but he's not really since Marco gets to outsmart and out-maneuver several villains. Lundgren does a fine job with the sliver of a role that he's got, though that's not really saying much.

The most significant problem with "Black Water" is that nobody, not even the good CIA agents (some of whom are proven to be bad before the film hits its midway point), talk about their super-secret, under-water CIA prison setting. In this aqua-jail, torture and undocumented interrogations are standard operating procedure. Nobody balks at that galling reality. Instead, "Black Water" concerns the capture and inevitable release of Wheeler, a good guy who is accused of bad things, but that we all trust implicitly because, uh, his lady partner was executed in front of him? This kind of "avenge the dead girl" stock plot doesn't make sense when transplanted to a modern setting, one where US officials can threaten to stab a guy in the eyeball and walk away looking comparatively innocent. If you're going to exploit something as grisly as  government-sanctioned torture, then you'd better follow through. The makers of "Black Water" never do.

And what of Van Damme? As Wheeler, he spends much of his time going pew-pew with automatic rifles and/or scowling at instantly forgettable baddies. Forget Lundgren: even the twice-billed star of "Double Impact" deserves better than "Black Water." 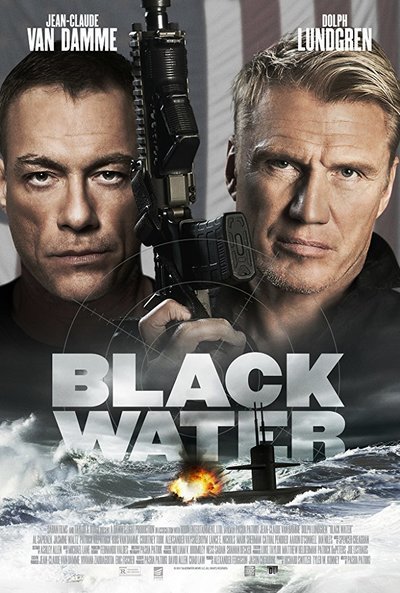