The center of “Black Panther: Wakanda Forever”—the sequel to the hugely popular “Black Panther,” and a tribute to the late Chadwick Boseman—is sincere, even if the overall film feels manufactured. It begins with a funeral for the recently deceased King T'Challa. Shuri (Letitia Wright) and Queen Ramonda (Angela Bassett) are dressed in white, following the black coffin, whose top features a silver emblem of the Black Panther mask and the crossed arms of the Wakanda salute. Their mournful procession, winding through the kingdom, is contrasted with slow-motion tracking shots of dancers jubilantly dancing in memory of their fallen king. After the coffin arrives at a clearing, where it ceremoniously rises to the sky, we cut to an earnest, emotional montage of Boseman as T'Challa. The solemn, aching continuum of images soon forms the “Marvel Studios” logo, announcing that this is still a Marvel movie. And “Wakanda Forever” is all the worse for it.

What was the secret ingredient for the success of “Black Panther”? Similar to the resplendent, secluded African nation of Wakanda, “Black Panther” existed just outside of the Marvel Cinematic Universe. It mostly stood on its own without the crushing requirements felt by every other film: The humor existed between the characters, not as random references to another property; the characters (with Andy Serkis as Ulysses Klaue as an exception) were particular to the story; the concerns rarely drifted toward franchise building aspirations.

But writer/director Ryan Coogler and his co-writer Joe Robert Cole don't possess the same kind of freedom with this melancholy sequel. Some limitations aren't within their control, such as the tragic death of Boseman. Others feel like a capitulation to assimilate into a movie-making machine.

The hulking script is chock-full of ideas and themes. Rather than fighting their common enemy (white colonists), two kingdoms helmed by people of color are pitted against each other (an idea that never thematically lands), and the film must delve into the cultural pain that still exists from the historical annihilation of Central and South America’s Indigenous kingdoms. It must also contend with a bevy of other requirements: setting up the Marvel TV series “Ironheart” (in which Dominique Thorne will star), acknowledging The Snap, grieving Boseman’s death, and finding a new Black Panther. These competing interests are no less smoothed out by MCU’s blockbuster demands (that this must be a mainstream hit and usher in the next phase of the cinematic universe) and the weight of satiating Black folks who feel seen by the fantastical confirmation of Black regalism. It’s too much for one movie. And you get the sense that this should’ve been two.

At nearly every turn, "Wakanda Forever" fails, starting with its setup. Colonist countries, now afraid of an African superpower, are scouring the world, from sea to sea, searching for vibranium (the metallic ore that powers the African kingdom). A young scientist named Riri (Thorne, treated as a plucky afterthought) plays a role in a search that leads mercenaries deep underwater where they encounter Namor/Kukulkan (a menacing and bold Tenoch Huerta), the king of Talokan, and his people, who are none too happy with the surface world. They want to destroy it. The godly Namor, his ears pointed to the sky, his winged feet fluttering, later surfaces in Wakanda. With water still dripping from his jade earrings and glimmering, vibranium-pearl-gold necklace, he approaches a still mournful Ramonda and a bitter Shuri with a threat masquerading as an alliance. His appearance causes Wakanda to turn to Everett Ross (Martin Freeman), which leads to other cameos and subplots that weigh down the entire film with franchise expectations.

What’s imperative to “Black Panther: Wakanda Forever” is the way Coogler centers righteous rage. Ramonda’s first big scene is her admonishing the United Nations for expecting her to share vibranium with the world, even as they try to steal the resource from her nation. Bassett, with a capital-A, acts in a sequence where her voice booms, her gaze is fixed and unforgiving, and the venom is felt. And yet, Shuri, who has buried herself in her lab, developing dangerous weapons, feels worse. She wants to see the world burn. Their shared anger forces a spew of short-sighted decisions that lead to further escalations with Namor—who desperately angles to avenge his mother and his ancestors. The film attempts to position the trio as different stages of grief, but in trying to get viewers up to speed on the atrocities experienced by Namor, it becomes slow and overblown.

Maybe somewhere a way existed to connect these arcs. But that would require better visual storytelling than the movie offers. Far too often, the dialogue stays on the surface, either by providing reams of exposition, externalizing exactly what’s on the character’s mind or by trying to meld together the real-life loss felt by the actors with that of the characters. The latter certainly offers these performers a necessary chance to process their hurt on screen, but when did filmmakers forget how to show without telling? Why are contemporary blockbusters so enamored with holding the audience’s hand by providing every minute detail? At one point, after Namor explains his entire backstory, Shuri responds with, “Why are you telling me all of this?” It feels like a note Coogler gave to himself.

The shortcomings in dialogue and story, and how often “Black Panther: Wakanda Forever” bows to IP-driven needs, would be easier to stomach if the visual components weren’t so creaky. The jittery fight sequences are too difficult to follow: inelegant compositions blur into an incomprehensible sludge with every cut by editors Michael P. Shawver, Kelley Dixon, and Jennifer Lame. Admittedly, there were projection issues with my screening of the film, so I will refrain from totally dismissing the all-too-dark lighting, but the actual framing by cinematographer Autumn Durald Arkapaw, working with the film’s copious visual effects, lacks a sense of space anyways. Scenes of everyday life in Wakanda—Black folks shopping, communities laughing and enjoying each other’s company—that once filled the viewer with joy feel artificial here. The vast landscapes of the nation, which once were filled with splendor, are now murky backgrounds. Some of that awe is recaptured when we see Talokan and its immense Mayan architecture and decorative wall paintings. But you wish, much like “Black Panther,” that Namor was first given his movie where these scenes could breathe, and we could become as integrated into this kingdom as we became in Wakanda.

Ultimately, this film attempts to set up the future through Shuri. Wright is a talented actress with the ability to emotionally shoulder a movie when given good material. But she is constantly working against the script here. She fights past a cringe cameo; she fights past clunky jokes; she fights past an ending that feels all too neat. An assured and charismatic Winston Duke as M’Baku is there to help, and a misused Lupita Nyong'o as Nakia is there for assistance. Okoye, played by Danai Gurira, provides resilience. And new addition Michaela Coel (“I May Destroy You”) as Aneka, a quirky character who tonally doesn’t work in this somber ensemble, is there for comic relief ... I guess? In any case, the collective front of these performers isn't enough to stem the tide of a movie that relies on shouting matches and broad visual and political metaphors that have been boiled down to their uncomplicated essence rather than their complex truths (which isn’t unlike Rihanna’s turgid soundtrack offering “Lift Me Up”).

A major sea battle ensues, new, ropey gadgets are employed, and loose ends are inarticulately tied. Another montage dedicated to Boseman occurs, and while the film is messy, you’re relieved that it begins and ends on the right foot. That is, until the saccharine post-credit scene. I’m not sure what Coogler was thinking. He had more weight on him for this movie than any filmmaker deserves. But when this scene occurred, I audibly groaned at what amounts to a weepy, treacly moment that’s wholly unnecessary, emotionally manipulative, and partially unearned. It’s one of the many instances where “Black Panther: Wakanda Forever” might have its heart in the right place but is in the wrong mindset and the worst space—at the center of a contrived cinematic universe—to mourn on its own terms.

Available in theaters on November 11th. 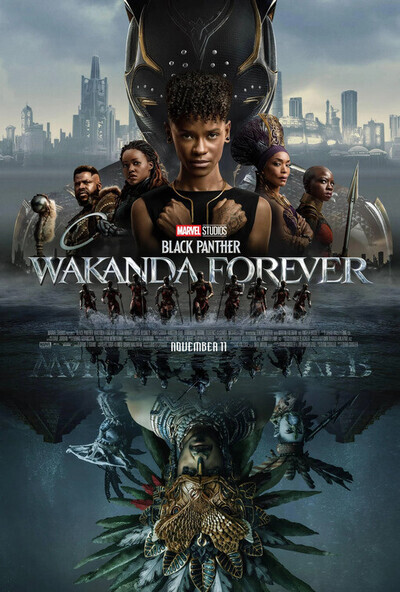 Rated PG-13 for sequences of strong violence, action and some language.