[Full disclosure: I’m friends with co-writer April Wolfe and have previously worked with her for Voice Media Group]

Led by writer/director Sophia Takal (“Always Shine,” “Into the Dark: New Year, New You”) and co-writer April Wolfe, “Black Christmas” is a PG-13 horror film for general audiences—it never really needed to be R-rated, especially since the 2006 “Black Christmas” remake is gory enough for two movies—that follows realistic characters who are trapped in a genuinely disturbing situation. So while not everything works in “Black Christmas,” the stuff that does is ultimately what matters most.

Mu Kappa Epsilon sister Riley (Imogen Poots) receives mysterious, threatening private messages on her smartphone. For some reason, she doesn’t instantly block the messenger, who claims to be Calvin Hawthorne, her slave-owning college’s founder. But as you might imagine, the real danger to Riley comes from the community of men who support (tacitly or directly) her cyber-stalker. Soon enough, Riley and her fellow sorority members, like Kris (Aleyse Shannon) and Marty (Lily Donoghue), are physically attacked by a cabal of masked men.

There’s never any doubt as to who these men are: frat guys from Delta Kappa Omicron, whose former president Brian (Ryan McIntire) sexually assaulted Riley, but they, of course, don’t believe her. Still, knowing who’s behind the masks—not to mention the “Eyes Wide Shut”-inspired masks that these creeps wear—only serve to enhance the movie’s viscerally upsetting stalk-and-slash scenes.

But that’s part of what makes this year’s “Black Christmas” not only immediately satisfying, but also a fitting companion to the bleak 1974 “Black Christmas,” another horror movie where young women are targeted and picked off by a deranged killer. Fear of women is the thematic tie that binds these two slashers, though the new “Black Christmas” is understandably more focused on how women are met with resistance whenever they accuse men of complicity and wrong-doing. Takal and Wolfe make it hard to dismiss Riley’s feelings of exasperation and panic by juxtaposing her hopeless interactions with Gil (Mark Neilson), a believably uncooperative security guard, and Professor Gelson (Cary Elwes), a condescending frat sponsor, with the sudden and periodic dispatch of Riley’s fellow MKE members.

During the middle portion of “Black Christmas,” we see a group of women trapped by macho hostility and indifference. This is the unnerving part of the movie, the part where a believable conspiracy, fostered by gross pride, takes shape. We see the plot against Riley and her friends everywhere: in the portrait of Brian that hangs in his frat’s hallway; in the childishly defensive way that Gil responds to Riley when she asks him to help her find one of her missing friends (mayonnaise has never looked so gross); in Gelson’s passive-aggressive dismissal of Riley’s accusations (made that much more credible by the way he conflates his mistrust of Riley with his nostalgia for Hawthorne); and in a quietly upsetting argument between Riley and Kris that’s full of bitter, self-flagellating accusations about who’s to blame for their present dilemma. Takal, Wolfe, and their generally strong ensemble cast (especially Poots) effectively drew me into the minds of Riley and her friends, a group of realistic characters who are messy and frightened without being diminished or condemned for their anger and insecurities.

I wasn’t as enamored with any scene that revolves around threatening DMs or Landon (Caleb Eberhardt), Riley’s nebbish-y, nice guy love interest (his aw-shucks, millennial Clark Kent mannerisms do nothing for me). There’s also an underwhelming supernatural explanation for the fraternity-related violence that Riley and her friends are subjected to, which isn’t really a spoiler, since a “supernatural” connection is explicitly suggested at the beginning of the film, which starts with a quote about Hawthorne students’ special talents. These scenes may open "Black Christmas" up to a wider audience, but they’re also distracting and don’t really complement the devastating mood of the movie’s best scenes, most of which are grounded in Riley and her friends’ lived-in stress. So while none of the film's more unbelievable plot elements are necessarily wrong-headed, they do feel tacked on in ways that the rest of “Black Christmas” does not.

Thankfully, Takal and Wolfe’s remake mostly feels personal and urgent thanks to some atmospheric scare scenes and some sharp dialogue that reflect the world outside the movie theater in ways that most other studio-distributed horror films don’t. I hope there’s a lot more where “Black Christmas” came from. 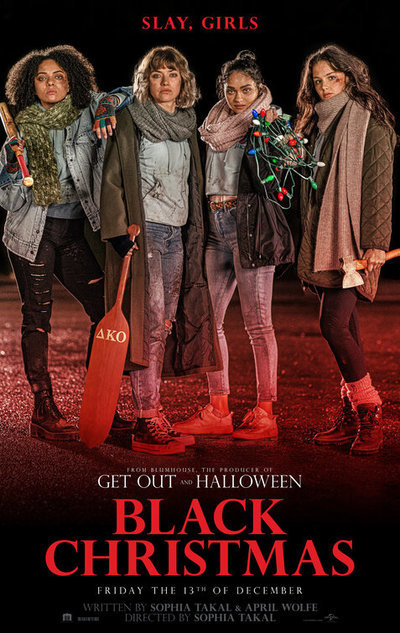