“Black and Blue” is a B-movie through and through—and that’s actually a compliment.

Director Deon Taylor has crafted another muscular thriller, coming out just a few months after the release of the criminally under-appreciated, scream-at-the-screen stalker drama “The Intruder.” He seems to appreciate the lean, direct simplicity of these genres and executes his own vision of them with stronger casts and better production values than you might expect.

Naomie Harris elevates this tale of a rookie cop who becomes the target of her corrupt colleagues through both her physical strength and emotional subtlety. Veteran cinematographer Dante Spinotti—a frequent Michael Mann collaborator and two-time Oscar nominee for “The Insider” and “L.A. Confidential”—creates moody, evocative images of the film’s New Orleans setting which greatly enhance the overall feeling of menace.

It’s only when it tries to be about something weightier and more substantial that “Black and Blue” loses its way and feels like it’ll never end. The topic of racism and the police sadly couldn’t be more relevant. People of color are needlessly profiled and targeted in cities across the United States, all too often resulting in violence and death. The use of the sort of body camera that’s crucial to the propulsion of Peter A. Dowling’s script is an attempt to stop this troubling trend. For the most part, all those ideas are baked into the story; it’s when the characters stop to explain their motivations and actions, leading to a series of false endings, that “Black and Blue” slogs into overlong territory.

With shades of “Training Day,” “Black and Blue” finds Harris’ idealistic Alicia West learning more than she ever could have imagined just three weeks after joining the force. A U.S. Army veteran who did tours in Afghanistan, Alicia has returned to her hometown and found that her old neighborhood is more dangerous than it was when she left. Taylor depicts one particular housing project as a horrifying concrete crucible, a place that breaks down its residents to their most base instincts in the name of survival.

Having offered to work a double shift to allow her partner (Reid Scott) to enjoy a long-planned date night with his wife, Alicia finds herself exposed to another group of officers and narcotics detectives, ones who make her feel even more insecure about her newbie status. Harris vividly finds the shading in her character’s search for an identity, for a place that feels right. Her mother has just died and she has no other family. She’s a New Orleans native but she’s been away for a while, which causes the locals to treat her like an interloper. She’s black but she’s also a cop—or blue, hence the title—so while her old friends and neighbors no longer trust her, neither do her new co-workers. You can sense her isolation, the way she flinches a little when she tries to be nice to a 10-year-old boy outside a run-down convenience store and is rebuffed in response. And in the film’s tense opening sequence, a couple of patrol cops pull her over for no apparent reason while she’s going for a morning jog in a hoodie, only to continue treating her rudely once they discover she’s blue, too.

“Are you one of us, or are you one of them?” is a question that hangs over the entire film, even before Alicia witnesses a white detective (Frank Grillo in his gritty comfort zone) fatally shooting a young, black man—prompting another narc to fire at her repeatedly—all of which she captures on her body camera. The rest of the film is a race against time as Alicia struggles to get back to police headquarters to upload the video into the system, even as more and more of her fellow officers are chasing after and closing in on her. The pervasive feeling of paranoia and the suspense of the chase are much of what make “Black and Blue” so compelling. Taylor knows how to stage a chase in clean, coherent fashion, although the overbearing score tends to smother the inherent drama of these scenes.

But Alicia isn’t just on the run from the cops who want to silence her. She also must avoid the neighborhood’s reigning drug dealer, Darius (a swaggering, smoldering Mike Colter), uncle of the shooting victim, because the narcs have framed her for the killing. Her only ally is a childhood friend who goes by the nickname Mouse (a stoic but kindhearted Tyrese Gibson) who runs the convenience store and provides her with sanctuary.

It’s a big-city Western where the good guys are actually bad and the bad guys are more complicated than they initially seem—a modern-day film noir in which a wrongly accused character tries to clear her name before it’s too late. “Black and Blue” may seem familiar, but it’s a solid version of a story you’ve heard before. 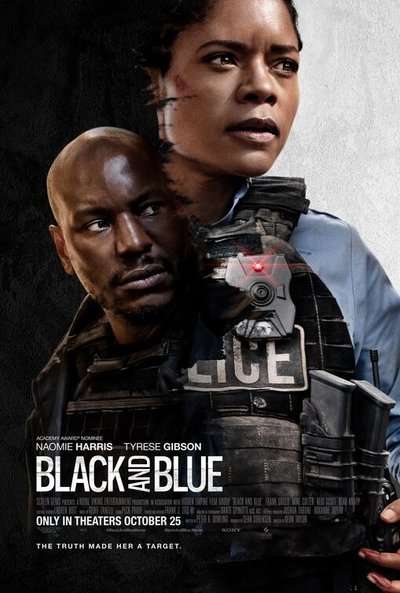