Between the World and Me

Kamilah Forbes’ adaptation of Ta-Nehisi Coates’ Between the World and Me builds on the 2018 Apollo Theater stage production. That performance included excerpts from Coates’ book read by actors backed by music. Famous people repeat this process on the small screen for HBO, but they are supplemented by animation, video footage, and a coda that brings the 2015 work into the present day. Coates’ letter to his 15-year-old son, Samori, feels even more timely in the wake of the last four years. Forbes does a commendable job visually contextualizing the work while her actors give their all to the material. Sometimes the material is too busy for its own good, with the supplemental images fighting for dominance when the words are more than enough to carry the feeling. But when it fires on all cylinders, this is a very effective, powerful companion piece to its source.

Forbes has assembled an impressive array of performers, from musicians Ledisi and Black Thought to veteran actors like Wendell Pierce, Joe Morton, Phylicia Rashad, and Angela Bassett. Two-time Oscar-winner Mahershala Ali delivers a bittersweet monologue about past and present lovers and the birth of Coates’ son, Samori. “Black-ish”’s Yara Shahidi, perhaps the youngest person in this cast, speaks of Coates’ school days while sitting in what looks like a dorm. Angela Davis appears in archival and current footage, bridging the gap between past and present activism. Even Oprah shows up late in the proceedings, wearing a head wrap and evoking the spirit of Maya Angelou while basking in the glow of Bradford Young’s superb cinematography.

Young’s work here is a character unto itself, dramatic or mournful at times and almost playful at others. He lights the homes of the actors and, at one point, shoots outside on location at what Coates called “the Mecca,” Howard University. He and Forbes stage the readings with a mixture of the performers looking directly at us and looking away in contemplation, grief or anger. Rashad’s section in particular works exceptionally well by having her never once acknowledge that the viewer is there. A regal dignity emanates from her, befitting Coates’ description of her character as “what they used to call a lady.”

David Teague’s script lifts choice, appropriate sections from the source. His selections keep the narrative flow of the book, building the film’s thesis in much the same way. Coates’ experiences become the backbone of the bigger picture he and the film are painting. For example, MJ Rodriguez and Kendrick Sampson star in a tense, terrifying re-enactment of a traffic stop by the Prince George’s County police. The scene cuts between the two of them in cars, occasionally interspersing scenes of real-life traffic stops that resulted in violence or death. The “PG County Cops,” as Coates called them, had a history of violence against minorities. The two actors recite a litany of their offenses before Forbes segues into the story of the killing of Prince Carmen Jones, a fellow Howard student, who was shot by a Black officer. The film is dedicated to him and Breonna Taylor, whose story Coates himself discusses in the one section not taken from his book.

“Between the World and Me” adds the historical details to “The Talk” that Black men like me got when we were growing up. It reveals why that conversation is even necessary. Coates constantly refers to “the Black body” in his text, and I think he means it both in an individual and a community sense. “This is your country, this is your world, this is your body,” he writes, “and you must find some way to live within all of it.” As the author discovered on the journey to social consciousness he shares with his son, this navigation is a constant thread in the lives of Black people. This revelation is a jolt to one’s system, and Coates doesn’t want to soften the blow for his son so much as prepare him for it. Teague includes passages that reflect this intention, read by Joe Morton in what passes for the elder statesman’s role in this film.

One truly infuriating example of how America works differently based on what you look like comes in a recounting of the moment where a White woman on the Upper West Side of Manhattan pushed then five-year-old Samori out of her way because he was not moving fast enough for her. I don’t care what color you are, if you’re a parent worth a damn, your first inclination is murder when someone puts their hands on your kid. Wendell Pierce and Pauletta Washington share the narration here, memorably describing how Coates temporarily forgot he was in “polite company,” as we call it. Understandably returning to his West Baltimore roots in his response, he’s met with the familiar threat from White defenders of the grown woman who assaulted his kid: “I could have you arrested.” Of course, this is immediately followed by people like Amy Cooper doing exactly that, using the cops as personal bodyguards against perceived Black threats.

I’m five years older than Ta-Nehisi Coates. “Between the World and Me” didn’t tell me anything I don’t already know. However, I appreciated it for a number of reasons. When the film showed clips of shows like “The Brady Bunch” and “Leave it to Beaver,” shows I enjoyed as a kid, I considered how TV had sold me the concept of normalcy as being solely a White construct. It’s also resident in how suburban life, middle America and all that nonsense gets crammed down my throat in this era by CNN, the New York Times and other outlets. But I’m also aware, as Coates ultimately deduces for his son, that the struggle continues to make us stronger, and within that struggle, there is a joy and camaraderie that we comprehend and feel in our collective DNA. As Howard University alum Ossie Davis wrote in his play, Purlie Victorious, “being Black can be a lot of fun when ain’t nobody looking.” Though this film is at times heartbreaking in its depiction of how things stubbornly refuse to change, Davis’ notion still peeks through the cracks, offering a bit of sustenance. 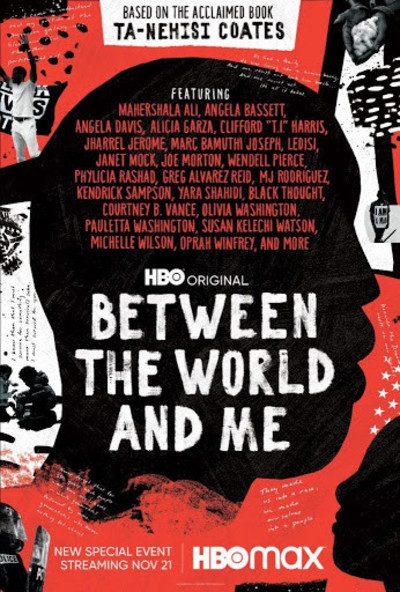 Ta-Nehisi Coates as Self

Angela Bassett as Self

Alicia Garza as Self

Jharrel Jerome as Self

Janet Mock as Self

Joe Morton as Self

Wendell Pierce as Self

Mj Rodriguez as Self

Kendrick Sampson as Self

Yara Shahidi as Self

Black Thought as Self

Courtney B. Vance as Self

Pauletta Washington as Self

Susan Kelechi Watson as Self

Michelle Wilson as Self

Writer (adapted for the screen by)