Christmas can be emotionally fraught no matter who you are or what family you grew up in, but it can be especially tricky when you’re an addict, and even more so when you have a tenuous grasp on your recovery. This is supposed to be such a joyous time—the most wonderful time of the year, even—but expectations and regrets can serve as triggers, adding to the anxiety of the season.

Writer-director Peter Hedges depicts this phenomenon with intimacy and empathy in “Ben Is Back,” about a teenage opioid addict who leaves rehab for 24 hours—supposedly with the encouragement of his sponsor—to visit his family on Christmas Eve. Hedges’ film is stronger in its first half, when it’s an understated character drama, than in its second half, when it morphs into a contrived crime thriller. But the performances remain uniformly strong and hold the story together, even as it threatens to spin out of control.

Hedges’ son, Lucas—who has put together a string of strong work in just the past couple of years between “Manchester By the Sea,” “Lady Bird,” “Boy Erased” and “mid90s”—stars as the title character, a charismatic young man who radiates a combination of enthusiasm and understandable unease. His relationship with Julia Roberts as his mother, Holly, provides the film with its vivid heart. You can feel every conflicting emotion she’s experiencing as she pulls up to the family’s house with her other kids in tow and is stunned at the sight of her eldest, a hoodied 19-year-old standing awkwardly in the driveway. She’s thrilled and terrified, and the brilliantly expressive Roberts makes both of those sensations visible simultaneously.

“Ben Is Back” takes place in snowy, idyllic, small-town New York, and Ben comes from a family of comfort and means. Holly has two kids with her second husband (Courtney B. Vance) in addition to Ben and his younger sister, Ivy (Kathryn Newton), from her first. The spacious house is bustling with excitement and preparations for the kids’ performances at Christmas Eve mass. The disease of addiction can afflict anyone, anywhere, Hedges reminds us, just as “Beautiful Boy” did earlier this year.

Holly is eager to make Ben’s unexpected arrival seem as normal as possible, laughing too hard at his jokes and buzzing about the kitchen in a flurry of activity. But she’s also been burned enough times to know that she must quickly and quietly clean out the pills from her medicine cabinet and gather valuables from her jewelry box. Ben’s a charmer and a talker—he’ll burst into a silly song to amuse the little ones—and it’s clear that he’s trying strenuously, as well, to make his return a happy one. But he’s also apprehensive about going into certain rooms in the house—like the attic, where he used to stash his drugs—for fear of the memories they’ll conjure.

Hedges’ direction is efficient and understated in these scenes. The moments between Ben and Holly talking in the kitchen or tackling crowds at the mall during some last-minute shopping are the film’s strongest. He wisely lets his actors act, giving them space to indicate so much in just a meaningful look. What they don’t say to each other is as important as what they do say. At the same time, a monologue Hedges delivers when Ben shares at a Narcotics Anonymous meeting is a powerful example of this young actor’s range, from swagger to introspection and, ultimately, regret.

The constant push-pull between Hedges and Roberts, the see-saw of the power dynamic as each tries to navigate this thorny situation, is the most compelling element of “Ben Is Back.” All the demons are still there, all the memories and the things Ben can’t remember. And that’s especially clear when he runs into people from his past. “It’s been a long time. I thought you were dead,” one guy at the mall says off-handedly. Ben is jumpy, shaky, perhaps not ready for this yet. Meanwhile, ever the mom in control, Holly tries to convince herself it’s all going to be fine, even repeating 12-step slogans like “It works if you work it.”

But then in the second half of “Ben Is Back,” it becomes a different kind of movie: a low-key thriller in which Ben and Holly are forced to run around town, revisiting his misdeeds in search of clues to a mystery. It’s not as interesting narratively or as relatable emotionally. But once again, Roberts gives a gripping performance as a mother coming to new realizations about the child she thought she finally understood. It’s like she’s seeing him completely for the first time, and it’s shattering all over again.

Meanwhile, she’s trying to keep all the plates spinning for the rest of the family on this day of great expectations. Vance, as the skeptical stepdad, takes a thinly-written role and makes it meatier. Newton is quite good, too, as the family’s voice of reason. (She and Hedges also played siblings last year in “Three Billboards Outside Ebbing, Missouri.”) Ivy has seen too much, so she sees through everyone’s lies—even the well-intentioned ones from her mom.

“Ben Is Back” ends on a note of vague hope, but it’s a reminder that Christmas Day is just one more opportunity to take it one day at a time. 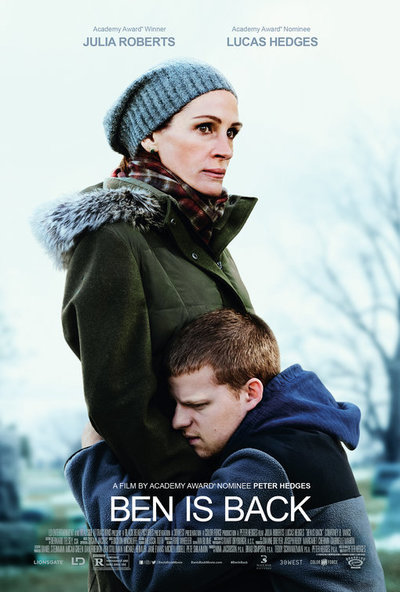 Rated R for language throughout and some drug use.

Courtney B. Vance as Mr. Beeby

Marquise Vilson as Leon B.