In the opening scenes of “Beirut,” the suave Mason Skiles (Jon Hamm) describes the location that also gives Brad Anderson’s new film a title as a “boarding house without a landlord.” This kind of dismissive chatter about a tumultuous part of the world is likely going to inflame the recent controversy about the perception that “Beirut” is just another film that uses the Middle East for backdrops and bad guys. (And the fact that it filmed in Morocco and not Lebanon didn’t help that controversy.) So, the first question in your mind may be to the validity of these complaints. Yes, it’s true that the trailer doesn’t come close to capturing the intricacies of the plot here, one of those classic Tony Gilroy contraptions in which the American characters, especially those hiding under government orders, are complicit and arguably more truly evil than the people on the ground. And the fact that this is a period piece helps explain the change of filming venue as Beirut 35 years ago looked nothing like it looks today. However, it’s difficult to shake the sense that some of what’s happening here is that classic Middle Eastern villainous set dressing—bearded men, lit in shadows, with generic Arabic music playing in the background. Mason calls it a boarding house, but “Beirut” seems remarkably uninterested in the actual cultural identity of the people who live there. However, that may be part of the point.

To enjoy “Beirut,” one needs to look at it less as an examination of a place and more as a vehicle for a star. After the award-winning success of “Mad Men,” the world kept waiting for filmmakers to translate Jon Hamm’s star power to the big screen … and it never really happened. He’s been great in supporting roles in films like “The Town” and “Baby Driver,” but a lead role that took advantage of his charisma never really came. On paper, Tony Gilroy seems like the perfect writer for Jon Hamm. Gilroy loves handsome men forced into morally gray areas, writing such roles for George Clooney (“Michael Clayton”), Clive Owen (“Duplicity”), and Matt Damon (he wrote the original Bourne trilogy). He’s a great writer when it comes to dismantling traditional star power, and Hamm fits that model perfectly. As such, this is Hamm’s best leading role to date, a reminder of how good he can be when he’s given the right material.

Hamm plays Mason, who we meet in 1972 as a happy U.S. diplomat just before the worst night of his life. A friend and colleague of Mason’s named Cal (Mark Pellegrino) comes to him and gives him shattering news—their 13-year-old ward Karim is the younger brother of a known terrorist, the man responsible for orchestrating the Munich Olympics attack, and there’s reason to believe that Karim has been in contact with his sibling. As Mason is trying to negotiate a peaceful way to extricate Karim safely and not disrupt his party or his family, Karim’s brother’s people show up and everything goes to hell. Karim is taken; Mason's wife is shot.

Cut to roughly ten years later—Mason is an alcoholic, working labor disputes in Boston, when he’s contacted and told that he’s needed in Beirut. If the city was on the verge of chaos in 1972, it is a ruinous nightmare in the early ‘80s, torn at the seams by everyone in the area who seeks to control it, including both the PLO and the Israelis. Against this backdrop of crisis, Mason is informed that Cal has been kidnapped, and now-grown Karim (Idir Chender) is the man responsible. Mason encounters a trio of U.S. suited goons who order him around and scream “don’t trust that guy” from the minute they show up—Dean Norris, Shea Wigham, and Larry Pine—and is given a more-trustworthy confidant in a CIA handler played by the great Rosamund Pike.

It’s incredibly clichéd at this point, but “Beirut” really is the kind of movie they don’t make anymore. Films of international diplomacy and political gamesmanship in the Middle East aren’t exactly profitable, and television has become the new home for such storytelling. Heck, even Jack Ryan is going to TV. And so there’s something refreshing about seeing a film clearly made for adults instead of the teen-driven fare that dominates the market. I’m hopeful that the mid-budget movie for grown-ups doesn’t die (or just go to Netflix)—although I’m worried that it almost certainly will. And so there’s something invigorating about seeing a movie that reminds me of the political thrillers of the ‘70s and ‘80s, the kind of movie we see less and less of at the multiplex.

And there are times when “Beirut” really works like the films that clearly inspired it. Hamm’s best arcs on “Mad Men” were arguably when Don Draper was at his most self-destructively low, and he finds a bit of those rhythms in Mason Skiles, a man destroyed by unimaginable trauma and then asked to come back and dig through that trauma to avoid an international crisis. His body language never overplays the world-weary aspect of his character—he doesn’t just look tired like some actors do when asked to play alcoholic or traumatized. It’s something subtler, something in his eyes that indicates he has thought about giving up entirely, maybe as recently as yesterday. And the supporting cast here is uniformly strong. Pike, Wigham and Norris are always welcome cast additions. Gilroy's script also carefully refuses to call attention to itself, it's zippy without being overly self-aware.

In the end, it’s fair to say that “Beirut” treats its setting a bit two-dimensionally, but I think Gilroy and the consistently-strong director Brad Anderson would say that this treatment is part of the point. The Beirut of “Beirut” is a battlefield, a place where people fight to maintain control for a region of the country largely because of where it’s located and not because of the people who live there or the history they hold. It makes some sense that the city itself would be a bit of a cipher to the characters of “Beirut”—they don’t care about the people there as much as what they can do for them. 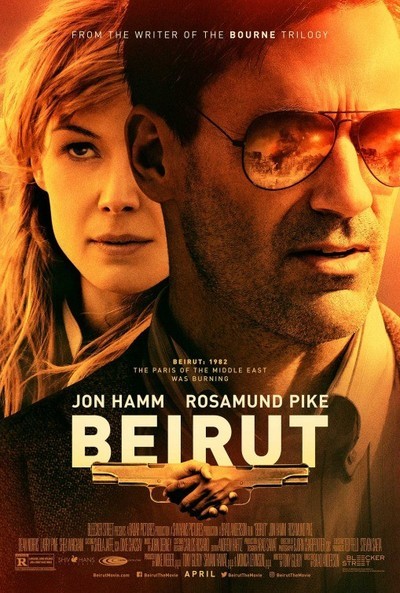 Rated R for language, some violence and a brief nude image