“Beckett” wants to be one of those paranoid thrillers from the 1970s, where the hero finds himself in an untenable situation surrounded by those he cannot trust. Films like “The Parallax View” and “Three Days of the Condor” immediately spring to mind as examples. If you value your time, you’ll go for one of those instead of this uninvolving hash made with international politics, corrupt government officials, kidnapping, and incredulous last-reel heroics. Because it’s on Netflix, you may be more forgiving than if you paid 20 bucks to see this in a theater. However, you’ll eventually be tempted to see what else is available besides director Ferdinando Cito Filomarino’s English-language debut.

John David Washington plays Beckett, an American traveling the backroads of Greece with his girlfriend, April (Alicia Vikander). These two have absolutely no chemistry onscreen, despite “Beckett” opening with them in bed together. Their idea of fun is looking at strangers and creating backstories for them. “Your stories always turn sleazy,” Beckett tells her. It’s the only thing we learn about April. The duo is touring the more remote, rocky parts of Greece after being warned that a protest would be occurring outside their Athens hotel. April scolds Beckett for being irresponsible for not calling the bed and breakfast where they’ll be staying in the boondocks. This is all we’ll learn about him.

If you didn’t know “Beckett” was a thriller, you’d think it was about two mismatched people with dry interests, mundane conversations, and zero attraction. The thriller elements kick in when Beckett falls asleep at the wheel and runs off the road, killing April and injuring himself in the process. The car flies through an abandoned house as well before stopping. As he’s trying to escape his vehicle, Beckett thinks he sees a woman and a red-headed preteen. When he speaks to them, begging for help, they suddenly disappear. Cinematographer Sayombhu Mukdeeprom shoots this as if it may be a trauma-related hallucination, so we’re not sure if our eyes are to be trusted. When cops start posing questions about the accident, the situation gets serious. Danger and violence become imminent; Filomarino keeps the pacing uneven and his protagonist uninteresting.

Writer Kevin A. Rice plays up the language barrier issues nicely—they’re the only suspenseful moments because the Greek remain untranslated. We’re as helpless as Beckett, who probably should have learned some basic Greek before embarking on this journey. Whenever someone who can speak English reverts to their native tongue, the film bristles with a sinister paranoia. Far more sinister are the two people, a bearded male cop and a blonde woman, who inexplicably start shooting at Beckett when they find he has returned to the scene of his accident. In the melee, he’s shot. This will not be the last bullet to pierce through our protagonist while he’s on the run.

“Beckett” does nothing with the notion that a Black man would stick out like a sore thumb in rural Greece. Instead, it keeps him running while introducing the aforementioned political plot-line. The protest march under that hotel in Athens has something to do with Karras (Yorgos Pirpassopoulos), the newly elected leader rumored to have a shady past. Later, Beckett will team up briefly with two activists, Eleni (Maria Votti) and Lena (Vicky Krieps), who are headed into town to attend that rally. By this point, numerous acts of violence have been perpetrated on the poor guy, including beatings and falls from great heights. By the closing credits, he will also be stabbed, slashed, and shot (again and again). In the film’s most ridiculous moment, he jumps several stories to land on a moving car exiting a parking garage.

Through all this carnage, Beckett remains an enigma, and a very dull one at that. Even the violent scenes feel half-hearted. Washington doesn’t click with anybody onscreen; he plays Beckett so blandly that it becomes a chore watching him. Maybe it’s the roles he’s had lately, but I remain stunned by how forgettable this actor has been in a leading role. From the resentful “Malcolm and Marie” to Christopher Nolan’s “Tenet,” he hasn’t done anything on the big screen as sharp, charismatic, and dangerous as he was in “BlacKkKlansman.” (TV is another matter, as he’s quite good on “Ballers.”) Filomarino keeps Beckett running for his life, but we have no incentive to care whether he’ll live or die.

We do know Beckett can hardly take the risk of trusting someone, even if his situation is so dire that he has to rely on the kindness of strangers. But if you’ve seen any early-1970s thriller, you can easily guess who’ll be the turncoats and who’ll be the allies. “Beckett” made me wish its titular hero had seen them, too. They not only would have told him who to trust, they would have shown him what a compelling main character looked like as well. 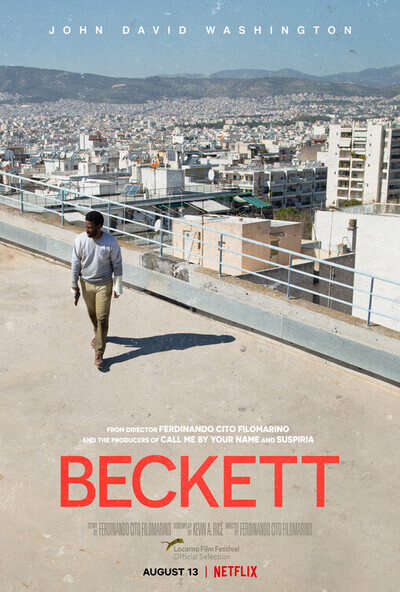