Adolescent cautionary tale movies are a generational rite of passage. My parents had films like “Last Summer.” I had Tim Hunter’s “River’s Edge.” Millennials got Larry Clark’s dirty old man farce, “Kids,” and Gus van Sant’s “Elephant.” Writer/director Danny Madden’s “Beast Beast” is Gen-Z’s turn in the barrel, and like its subgenre brethren, it’s more likely to traumatize the parents than their kids. If you’ve lived long enough, or have seen enough movies, you can easily predict every single thing that takes place here, including its jarring tonal swing. This is an iffy proposition when you discover one of the three multi-ethnic protagonists is 24-year-old Adam (Will Madden), a White gun aficionado who lives at home with his parents and a lot of weapons. A cynic like me was just waiting for him to shoot somebody, and even if he doesn’t, the film puts the idea in your mind with its soundtrack noises, engendering a sense of unease.

Adam wants to channel his enthusiasm for guns into a series of YouTube videos. Nowadays, social media carries great social currency and, as Adam tries to explain to the understandably frustrated parents who want him out of their house, it can prove financially successful. However, he’s a “purist” in terms of how he wants to portray the technical side of his videos—and he’s quite awkward to boot. Madden has fun putting his real-life brother through scenes of him clumsily recording and editing his YouTube content. Unfortunately, Adam is no match for much more polished videos where burly men and sexy women blow up propane tanks with gunfire and more impressive artillery. He also doesn’t follow the Internet commandment that says “Thou Shalt Not Read the Comments.”

As Adam gets more frustrated, he becomes angrier, at one point punching a wall when his father lectures him. “We’re being shown all this because he’s going to shoot somebody,” I thought. But who? His parents? His internet rivals? Random people at the mall? Based on a conversation we’re privy to, where Adam’s mother talks about letting “those people” into the neighborhood, I placed my bet on the victim being somebody brown. But Adam’s story is only one of the three threads “Beast Beast” will alternate between for its first hour.

The other two main characters are high school students Krista (Shirley Chen) and Nito (Jose Angeles). Both are naturally drawn to performing—she with her acting troupe and he with his parkour and skateboard videos. (Angeles’ real-life videos are quite popular, I am told.) The film’s title comes from a chant Krista does with her fellow actors, encouraged by their nurturing teacher. As luck would have it, Krista used to star in her next door neighbor, Adam’s videos when she was a kid, videos she writes him about in an early scene. This movie has more coincidences than a romantic comedy, and they’re used to bring Krista, Nito, and Adam together in time for a major life-changing event.

Nito perfected the skills that get him YouTube views because he spends a lot of time on the street. Though he lives with his father, dear old Dad barely lets him in the house, especially when Pops has “company.” So, like many kids in this type of situation, Nito looks for family elsewhere. He finds an expected kindred spirit and romantic interest in Krista, who wants to turn a story he told her into a musical performance for theater class. After a chance meeting with an alumnus of his high school, Nito is also welcomed into a clique of petty thieves who see his particular set of skills as useful in plying their trade.

The first hour of “Beast Beast” floats by like a lazy summer afternoon, which might inspire one’s own thoughts about their adolescence. The three leads do a good job creating their characters, with cinematographer Kristian Zuniga giving each of their tales a specific look and color scheme. But this also suffers from that indie fever where the camera and framing goes askew and "documentary style" for no reason except to distract you from how familiar the story is. Madden’s character gets the most fleshed out arc, which makes me assume the film has something to say about what he does and the ensuing fall out. The result is a mixed message about internet fame that isn’t worth the trauma you’ll endure. I need to speak on that, so if you’ve made it this far despite the spoiler warning, you still have time to turn back.

The cynic in me was, of course, correct. Adam shoots several home invaders who break into his house, quite graphically I may add, as they are riddled with bullets. You can guess who they are, and they threw in one White guy so it wouldn’t look like Charles Bronson’s “Death Wish.” Coincidence brings one of the main characters back just in time to see the other shot in the back. I tell you this because, considering what’s been going on the past two months vis-à-vis gun violence, you should be warned as the film is not being marketed as this type of drama. Additionally, the racial optics of this scene and its subsequent companion scene of attempted revenge leave, at best, a lot to be discussed, and at worst, a lot to be desired.

Now playing in select theaters and available on demand on May 4. 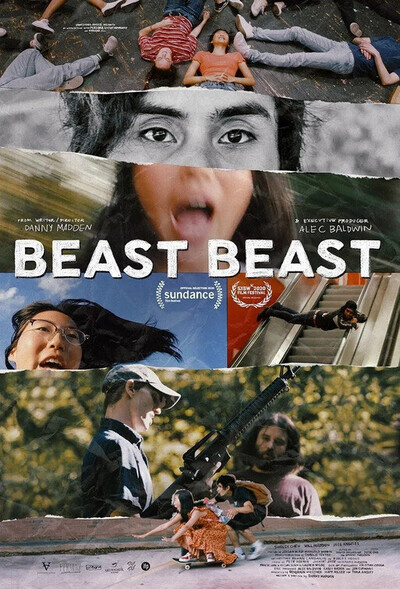 Will Madden as Adam