Scott Speedman and Evan Rachel Wood would have been better off doing a YouTube video together where they simply make goo-goo eyes at one another than co-starring in a featherweight trifle like "Barefoot". Their combined cuteness quotient alone could easily top the number of hits for any cat-falling-off-a-ledge video.

Certainly, it would be a lot more sensible than expecting us to believe that Speedman is Jay, a ne'er-do-well, GQ-cover-handsome son of a rich New Orleans family. He is supposed to be the sort of La-la-land reprobate who abandons an anonymous blonde in his bed with nary an adios, heads to a strip club where he is told he drunkenly gave a lap dance to an unhappy Russian guy the night before and then ambles over to a racetrack to lose money he doesn't have.

He then tops off his day by assaulting a thug at a casino where he owes thousands to a Mr. Big and, being on probation for a litany of offenses, gets to serve time mopping floors at a mental hospital.

All of this may have been somewhat plausible—and watchable—if Speedman gave the impression that Jay enjoyed even the slightest bit of glee from his hedonistic lifestyle. Instead, he is simply going through the bad-boy motions to presumably punish his disapproving Daddy back home by living down to his expectations while causing him to fume in his brocade-and-bougainvillea-bedecked mansion.

At least seeing a much older Treat Williams as his not-so-proud papa serves as a wake-up reminder that the film version of "Hair" was 35 long years ago.

With Jay in need of money to pay off his gambling debts, he decides to attend his brother's wedding so he can hit up his father for cash. Trouble is, he needs to prove he has settled down and what better way than by showing up with a steady girlfriend on his arm.

That is where Wood comes in. She is Daisy, a possibly schizophrenic patient who takes a shine to Jay and follows him out of the hospital like a stray puppy. A stray puppy who doesn't like shoes. Hence, the movie's title. As for why the names of the characters seem to be allusions to "The Great Gatsby", your guess will be as good as mine.

Voilà, fake girlfriend problem solved. Save for the fact that Daisy has supposedly killed her mother, who kept her sheltered at home for most of her life and only allowed her to watch VH1 (where she learned to dance), TV Land (she knows people are sometimes named Beaver) and CMT (no sign of country music knowledge, however).

To top it off, she is played by Marilyn Manson's former squeeze, the adolescent hellion from "Thirteen".

No matter. Daisy is the adorable kind of crazy that you only find in movies. The type who seems more of a flower child set free upon the universe, offering guileless joy and sunny enlightenment to all she encounters. Like a female version of Dustin Hoffman in "Rain Man" or Peter Sellers in "Being There" if they wore the sexy-schoolgirl clothes that Jay has borrowed from a stripper, Daisy brightens everyone's mood. Even if she panics in an airline bathroom and hysterically shrieks at how loud it flushes (OK, that sometimes freaks me out, too) and eats every packet of peanuts she can get her precious hands on.

After announcing to one and all in the most adorably unconvincing manner that she is a nurse—her cover designed by Jay—Daisy settles in at an elaborate pre-wedding dinner party. Despite the fact that she sniffs the paté appetizer and observes loudly that it smells like Fancy Feast cat food, everyone is simply enchanted by this magical creature.

But for only as long as it takes Jay to tick off his dad—and off the pair go on the lam cross-country but not before stealing his father's beloved vintage mobile home. Emotional pit stops along the way will include revelations about Daisy's past, the eventual redeeming of Jay's wayward habits and, of course, romance of a very sweet and chaste sort.

There is one thing about "Barefoot" that makes it at least a guilty pleasure. Once you ignore how improbable Daisy is—why is it that a girl so naïve and unworldly can always have such perfect hair and just-so makeup, unless her mother also let her watch makeover shows—there is something oddly captivating about Wood's performance. Unlike Speedman, who never convinces at all, she seems to be enjoying this change-of-pace role and makes you believe she could possibly turn the world on with a smile.

But instead of tossing a hat in the air, Daisy simply has to walk through an airport in a revealing shirt emblazoned with the words "Hot for Teacher." 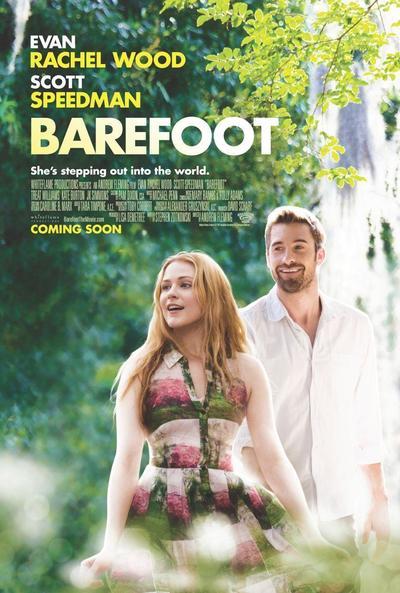