"B.A.P.S.'' is jaw-droppingly bad, a movie so misconceived I wonder why anyone involved wanted to make it. As a vehicle for the talents of director Robert Townsend and actors Halle Berry and Martin Landau, it represents a grave miscalculation; I hope they quickly put it behind them.

The title stands for "Black American Princesses.'' Its two heroines are more like tacky Cinderellas. Berry and Natalie Desselle play vulgar and garish homegirls from Decatur, Ga., whose artificial nails are 8 inches long, whose gold teeth sparkle, and whose hairpieces are piled so high on their heads that the concept passes beyond satire and into cruelty.

There is a thin line between satire and offensiveness, and this crosses it. Its portraits of these two working-class black women have been painted with snobbery and scorn. The actresses don't inhabit the caricatures with conviction. The result is a hurtful stereotype, because the comedy doesn't work to redeem it.

We should sense some affection for them from the filmmakers, but we don't--not until they receive a magic Hollywood makeover in the later scenes of the movie, and miraculously lose their gold teeth. The movie invites us to laugh at them, not with them, but that's a moot point since the audience I joined did not laugh at all, except incredulously.

The plot: Berry plays Nisi, a waitress, who hears on MTV about a contest to choose a dancer for a music video and national tour by Heavy D. She shares this news with her friend Mickey (Desselle), a hairdresser, and it fits right into their plans for marrying rich guys and living on easy street. So they say goodbye to their shiftless boyfriends and fly to L.A. wearing hairstyles so extreme no one behind them on the airplane can see the movie. Funny? No. It could have been funny, but not when the reaction shots are of annoyed white businessmen asking to change their seats.

In L.A. they're spotted at the audition by a mysterious figure who makes them an attractive offer: Room and board in a Bel Air mansion and $10,000. What's the deal? He represents Mr. Blakemore (Landau), a dying millionaire, who has only experienced true love once in his life, many years ago--with Lily, his family's black maid. Nisi will pose as Lily's granddaughter and cheer up the old guy in his final days on earth.

There's more to it than that, of course; it's all a scam. But Mr. Blakemore inexplicably takes to the women from the moment he sees them. (Nisi, dressed in pink latex and high heels, looks like a hooker, and Mickey looks like her coach.) The plot later reveals details that make it highly unlikely Mr. Blakemore would even for a second have been deceived by the story, but never mind; the movie's attention span isn't long enough for it to remember its own setup.

Even though the movie fails as a comedy, someone should have told Landau it was intended to be one. He plays Mr. Blakemore with gracious charm and great dignity, which is all wrong; his deathbed scene is done with such clunky sincerity that one fears Landau actually expected audiences to be moved by it. Not in this movie. The cause of his ill health is left a little obscure, and no wonder, because shortly before his dreadful deathbed scene he's well enough to join the women in a wild night of disco dancing. You have not lived until you've seen Martin Landau disco. Well, perhaps you have. He is both miscast and misdirected, and seems to labor under the misapprehension that his role should be taken seriously.

Another key character is Manley (Ian Richardson), Blakemore's butler, who turns up his nose at the first sight of the women, but inevitably comes to like them. The message of the movie, I guess, is that two homegirls can find wealth and happiness if only they wear blond wigs, get rid of those gold teeth and country vocabularies, and are nice to rich old white men. It gets even better: At one point, the boyfriends from Georgia are flown out to L.A. to share the good luck, and they vow to get their acts together and Plan For Their Futures, in a scene that comes way too late in the film for us to believe or care.

The movie was written by the actress Troy Beyer, who has a small role as a lawyer. What was she thinking of? I don't have a clue. The movie doesn't work, but was there any way this material could ever have worked? My guess is that African Americans will be offended by the movie, and whites will be embarrassed. The movie will bring us all together, I imagine, in paralyzing boredom. 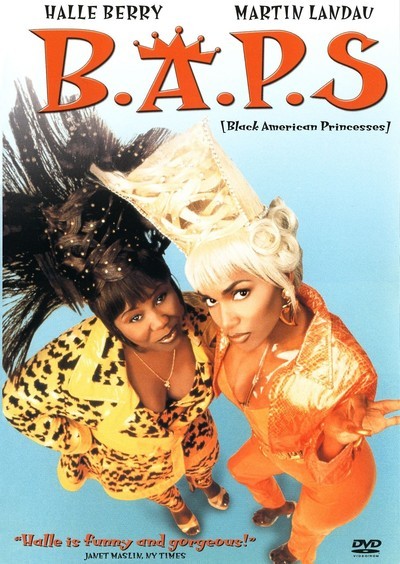