There's something about the summer in between high school and college. Friendships break up or become super clingy, due to all that impending separation anxiety. Romances break up. People get way too drunk and hug it out. Tears are shed. Things get a little ... intense. "Banana Split" takes place during such a summer, complete with brightly-colored chapter markers: "89 Days Until Orientation," and etc. Even with the clock running down, there's an in-between feeling, a "this is forever and yet it's also ending" feeling, nicely captured by director Benjamin Kasulke, with poignant and sometimes funny needle drops, and two excellent central performances from Hannah Marks and Liana Liberato. There's a lot more complexity here than may meet the eye, even with the title's broad-stroke (so to speak) double entendre.

"Banana Split" opens with a montage, a bold and not entirely successful choice, showing the falling-in-love, virginity-losing, and eventual old-married-couple-fighting of April (Marks) and her hottie boyfriend Nick (Dylan Sprouse). As the montage reveals in a quick succession of scenes, they're together for two years (basically a 40-year-marriage in high school years). But when April gets into Boston University, all the way across the country from Los Angeles, things change. Nick is going to school locally in California. He's hurt she would make such a choice. The two don't break up in a formal way. April still thinks they're going out, until one day she notices something horrifying: Nick posting pictures on his Instagram of him making out with another girl.

April is a pretty tough cookie, and judging from her mother (a very funny Jessica Hecht), and her trash-talking younger sister (Addison Riecke), the apples all fall from the same tree. Tough as she may be, April is devastated by Nick abandoning her (and confused by him still texting her). Luke Spencer Roberts plays Ben, friend to both Nick and April, who finds himself stuck in the middle. Meanwhile, April becomes obsessed with this new girl, who has dropped into their crowd from out of nowhere. She is Clara (Liana Liberato), a coolly beautiful and confident blonde, and April glowers at her from across crowded parties, getting way too drunk, tears pooling up in her eyes. Eventually, though, the girls become friends, and decide to continue their friendship without telling anyone—not Nick, not social media, no one. It's like they are cheating on everyone with each other. They sneak around, and Clara keeps seeing Nick, and April has many mixed feelings.

The script was co-written by Hannah Marks and Joey Power (this is their second script, the first being 2018's "After Everything"). Marks also served as executive producer for the film. Marks is just 27 years old, and this alone is hope for the future. Young women creating their own work, initiating projects, getting it done, not waiting around for someone in power to "give them" roles they deserve. Marks was recently named by Rolling Stone as one of the "25 under 25 changing the world." A heady label, but Marks seems more than ready to take on all those challenges. As children, both Marks and Liberato were profiled in a 2006 New York Times Magazine article about child actors (Liberato was featured on the cover). Child actors often flame out, suffering from the "too much too soon" tradition in the industry. But Marks and Liberato have made that transition with grace: they both work all the time, in television series (Marks in "Dirk Gently's Holistic Detective Agency" and Liberato in "Sons of Anarchy" and "Light as a Feather"). In 2011, Liberato gave a tremendous performance in David Schwimmer's "Trust" playing a 14-year-old child lured into a "relationship" by a much-older online predator.

Here, together, Marks and Liberato make such an interesting onscreen pair. Marks is all wisecracks, but with an undercurrent of constant roiling emotion, rage and hurt and humor. She wears her mixed feelings on her sleeve. And Liberato plays a girl who presents as confident and open—but the truth is she's struggling to find her way, she's a little bit lost, even. Clara is not going to college. She doesn't know what she wants to do with her life. Sometimes flashes of deep ambivalence cross her face, showing that Clara doesn't quite like the way things are going, that she may not be as easy-breezy as she seems.

"Banana Split"'s opening sequence is a little rough. The dialogue is presentational, and the jokey tone is a bit arch. But once the two girls start hanging out together, "Banana Split" settles into its rhythm. There are moments of poignancy and humor. This is an entertaining and often insightful look at female friendship during a particularly strange time, the hiatus before everything changes, the last gasp before adulthood and independence. The film is refreshingly frank about teenage life, the drinking and drugs, the fake IDs, the drunken Lyft rides home, all of the bad choices everyone makes. The film isn't phobic or leering about female sexuality. It's all very matter-of-fact, another refreshing choice. Even Nick gets to have complexity (eventually). This is director Kasulke's first narrative feature, but he comes to the table with a lot of experience as a cinematographer and it shows. The film looks beautiful, using natural locations and available golden sunlight, all of which creates a real sense of the environment.

Make it through the first 10 minutes. It’s just the film warming up. The rest of it flows. 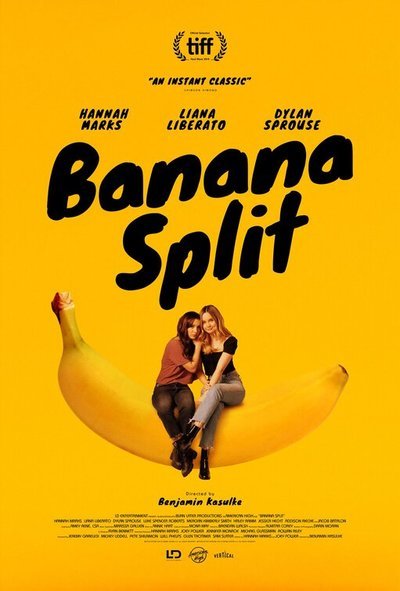 Rated R for crude sexual content and language throughout, drug and alcohol use -- all involving teens.