The best thing I can say about Justin Simien’s Black hairstyle horror satire “Bad Hair” is that it made me want to put a killer weave on my head. I would look like Thulsa Doom from 1982’s “Conan the Barbarian,” but I’m fine with that. I’ve always wanted to shake my hair like Cab Calloway. Plus, I have scores to settle. Creature feature horror is one of my favorite genres, and I gauge them on whether I would want to own the monster. In that regard, this film is successful: Though it eventually doesn’t play by its established rules, the killer coif is pretty cool from a visual perspective. It thrives on blood and isn’t picky about where it comes from or who it has to kill to get it. Like “The Blob,” it has the ability to reshape itself as it hunts prey. It also makes the eyes of its owner, Anna Bludso (Elle Lorraine) glow while giving her flashbacks that look like a Kwanzaa greeting card.

Where “Bad Hair” is not so successful, however, is in reckoning with the hornet’s nest it kicks regarding its subject matter. At almost two hours, Simien has time to interrogate the natural vs. processed hair argument instead of only hinting at it occasionally. It took Spike Lee just over six minutes to create such a dialogue in the “Straight and Nappy” number in “School Daze.” That film came out in 1988, one year before “Bad Hair” takes place. The lack of focus on this controversial issue is more a product of the screenplay biting off more than it can chew. We also have to deal with workplace sexism, racial micro- and macroaggressions, gentrification, the media’s need to catering to a White audience—and that’s just on the satire side. On the horror side, we’ve got witches, folktales, slavery and UltraPerms gone bad. The horror side works out better, even if it doesn’t live up to its promise of a weave-based Verzuz battle featuring Vanessa Williams.

Williams plays Zora, the new head of Culture TV, an MTV-ish channel in mid-pivot due to falling ratings. Zora with the “good hair” is replacing Anna’s old boss, Edna (Judith Scott). It’s implied that Edna’s reign was too Afrocentric, evidenced by the addition of Grant Madison (James van der Beek), a White man with ideas that will supposedly save the network. I was confused about Anna’s job. Was she even being paid by Edna for all her years of work? Her father Amos (Blair Underwood in a jarring grey beard) refers to his daughter’s job as an internship and Anna can barely pay her rent. Anna’s big dreams are to be a VJ, though the station already has its quota of one Black onscreen celebrity with natural hair, Sista Soul (Yaani King Mondschein). Anyone else whose hair is less than Dark ‘n Lovely is faced with unemployment. The most ominous moment in “Bad Hair” may be when Zora asks Anna “who does your hair?”

It’s a rare time anyone discusses hair in this movie, which is a problem because we never get a feel for what the women’s hair choices meant to them. Anna thinks straight hair will get her the coveted position, but why a weave? Simien offers a flashback of a traumatic experience Anna had with a no-lye relaxer that left her with permanent scarring. My aunt used to say they called it a no-lye relaxer because “it burned the hell out of your scalp and that’s no lie.” Still, it’s easier and cheaper than a weave. “Bad Hair” spends more plot time dealing with trifling-ass men like Anna’s thieving ex-boyfriend, Julius (Jay Pharaoh) than any of the female relationships that might shine a light on the hair-related issues.

Zora recommends a beauty salon run by Virgie (Laverne Cox). After Anna begs for an appointment, Virgie fits her in as her last customer. “Are you tender-headed?” asks Virgie, leaning on the word so hard  that my now-bald kitchen had sense memories of my mother’s comb yanking itself through my hair. What follows is a gory scene of the killer weave being sewn into Anna’s hair. It’s ridiculously over the top, with a memorably sinister Cox and a suffering Lorraine cementing the scene's effectiveness. All the subsequent attacks by the monster are pitched at this level as well, which adds to the fun.

Simien populates this film with so many extra characters that it feels like a pilot for a TV series rather than a movie. This excess of characters worked for “Dear White People,” the director’s prior effort, because it took place on a college campus and had an episodic “day in the life” approach rather than a straightforward narrative. “Bad Hair” gives us underutilized characters like Anna’s co-worker Brook-Lynne (Lena Waithe) and Anna’s sister, Linda (Chanté Adams). Linda is potentially fascinating because she knows about the African folk tale that may have something to do with the modus operandi of Anna’s weave. The scenes with Anna’s family feel off-kilter when they should be essential to the story. We should be more concerned with the myth-making elements of the book of folklore Linda cites, rather than her relatives shaming Anna’s professional choices.

It takes almost an hour before the weave claims its first victim, though it provides Anna with more than a little warning of its impending intentions. As much as I enjoyed the murderous shenanigans, I’m still left with far too many questions. Movies like this need to move fast enough for us to not focus on its implausible elements, and I don’t mean any of the horror stuff. This material would have worked better either by directly and uncomfortably confronting the subject it’s satirizing, like Spike Lee does in “Bamboozled,” or by completely bypassing the message altogether in favor of pure grindhouse tactics. By playing coy with what the notion of good and bad hair means to its owners, “Bad Hair” fails at the kind of Black experience-related relevance Jordan Peele wrung out of “Get Out.” The hirsute creature almost saves the movie, but it misses by a hair. 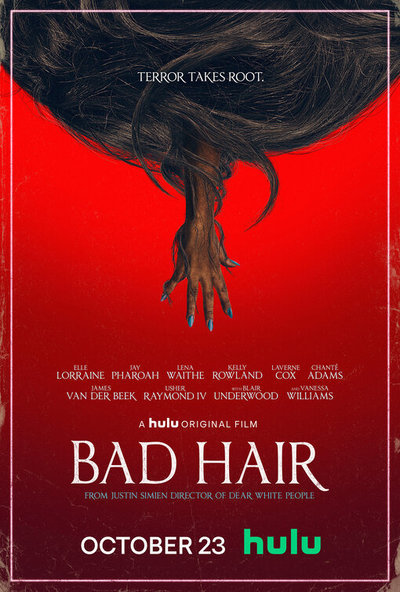