Parents looking for an electronic babysitter over this holiday season will likely pitch “Back to the Outback,” an Australian animated effort dropping today on Netflix, as a variation on “Madagascar.” Remember the cute movies you loved with the wise-cracking penguins and the hypochondriac giraffe, Billy?! This is basically that again. And it really is basically that again. Once more, a group of animals at a sanctuary escape their captors in an effort to go back to the wild, forming an unexpected family along the way. In this case, the sanctuary is in Sydney and the destination is the Outback. Sprinkle in a bit of a “Finding Nemo”-esque journey and the timeless family film message about not judging a book by its cover, and you have a film that feels a bit too much like it was made by a machine instead of actual people. There’s just too little fresh creative passion here in a project that’s sometimes sweet but also remarkably programmatic. Everyone accuses Netflix of designing to the algorithm more than to creative ends. These animal misfits won’t help.

The new taipan at the Australian animal sanctuary is named Maddie (Isla Fisher), and she’s been thrown into something called The Danger House with the other animals that scare children into the realization that a lot of the natural world wants them dead. While the adorable koala named Pretty Boy (Tim Minchin) is getting so much attention across the property that he has an international popular webcam on which people watch him go to sleep, Maddie is learning a tough lesson about how appearance impacts what people think of an entire species. Denis Leary used to have a bit about how we only fought for the animals that are cute—no one wants to save the cows, but they can’t swim around and do cute things with their hands like otters. Maddie isn’t an otter.

She learns this the hard way after expecting her trainer Chaz (Eric Bana) to show her off to the visitors only to watch as he leans into the snake stereotypes. She’s not going to take it, quickly banding together with other residents of the Danger House, including a lizard (Miranda Tapsell) and a spider in heat (Guy Pearce). Through a series of mistakes, Pretty Boy ends up on the journey with them as they make their way through Sydney to the Outback, trying to stay one step ahead of Chaz and his son. Directors Clare Knight and Harry Cripps admirably try to inject “Back to the Outback” with a big heart, something Fisher’s emotional delivery notably elevates.

The problem here is a recurring one with recent family entertainment and it's how little there is below the repetitive surface. Jokes are recycled with alarming regularity, and most of the supporting characters outside of Maddie fall flat. (Think about how wonderfully the writers on “Nemo” realized all the characters on both Marlin’s journey and in the fish tank with Nemo. No such luck here.) Chaz is a broad Steve Irwin stereotype and Pretty Boy becomes an aggressive annoyance, a character given way too much screen time.

There’s a decent message in "Back to the Outback" about not buying into false impressions of an entire species and also in how the downtrodden band together—there’s even something called the Ugly Secret Society—but good intentions only go so far in family entertainment. I’d like to think that Knight, Cripps, and Netflix set out to make more than just a thinner version of “Madagascar” to satisfy a need of the algorithm of the powerhouse streamer, but I’m not so sure. 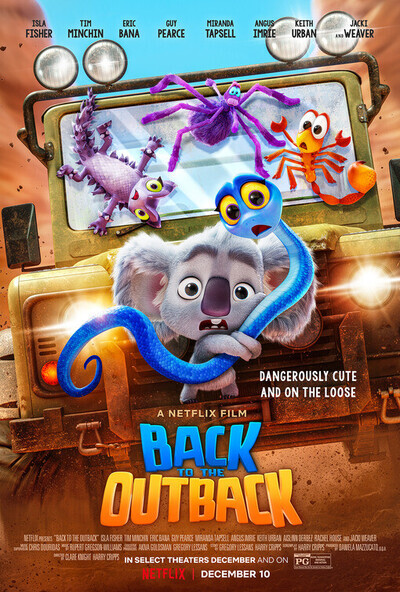