Ambitious but unrefined, Alex Pettyfer’s directorial debut “Back Roads” is a raw movie overburdened by heavy-handed drama. Harley (Pettyfer) gives up his chance at college to care for his three sisters in rural Pennsylvania after their mother (Juliette Lewis) shoots and kills their abusive father. Amid sexual abuse, violence, tragedy and pressure, Harley falls into a tailspin but finds an addicting comfort in the arms of a neglected housewife (Jennifer Morrison) down the road.

“Back Roads” revels in its characters’ pain, almost to a cruel extent. Tawni O'Dell, who wrote the source novel and the screenplay, layers one tragedy after another screaming match, and the effect is numbing. Not all tearful screaming sessions translate well from the page to the screen, and this is an excruciating example of overkill.

The movie clumsily begins by spelling out a brief history of Harley’s dysfunctional family. The audience first sees him tear-stained and bloody-nosed, but the details of why won’t make sense until the end of the movie. Through the film’s many rounds of family in-fighting, details slowly slip out that point to a kind of cyclical violence, where abuse leads to more abuse. Without any break from the downpour of bleakness in the story and grim cinematography, “Back Roads” doesn't lead to any kind of closure or enlightenment.

While the dark family dynamics may bring to mind “Winter’s Bone” or this summer’s much-discussed miniseries, “Sharp Objects,” “Back Roads” doesn’t define its characters beyond their conflicts with each other. Jennifer Lawrence gave her “Winter’s Bone” character a headstrong determination to save her family, and Amy Adams surprised "Sharp Objects" audiences with her vulnerable performance as an alcoholic journalist who’s returned home for a grisly story while forced to deal with her inner demons. Pettyfer doesn’t explore Harley in the same way, and the most he can be described as is damaged, a wounded animal slowly sinking below the surface of a deep depression, resisting any help extended his way.

Harley’s affair with his married neighbor is the stuff of a half-finished romance novel. Of course, he recklessly falls in love with an older woman who offers him free sexual healing. The bad romance seems like it was supposed to show just how traumatized our leading man is after he feels that his mother abandoned their family, but it comes across like a clichéd subplot. The underdevelopment does not stop with the doomed fling. It also extends to Harley’s eldest sister, Amber (Nicola Peltz), who acts like a feral child, screaming at him for the smallest reasons. She’s barely a character, only a harbinger of chaos.

When done well, these dark family dramas can play out like a page-turning mysteries. We’re gripped by the gossipy kind of voyeurism that allows us to watch the familial disaster play out from a safe distance. Yet something about “Back Roads” feels unsatisfying. Perhaps it’s poverty porn that’s too familiar or too mean-spirited, the lazy Harlequin twists that don’t amount to much or the character that never reveals enough of himself to become interesting. The film is almost nihilistic in spirit but is tasteless enough to add a message about the rate of sexual assault against children at the end. 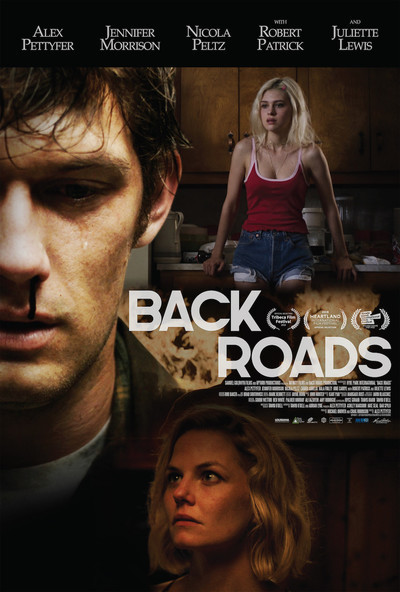