Back in the Day

Failed actor Jim Owens (Michael Rosenbaum, writer, director and star of "Back In the Day") returns home to Indiana for his 20-year high school reunion, and during a walk through a mall with his high school sweetheart Lori (Morena Baccarin), remarks happily, "I love it when things don't change." While this may be a realistic comment from the nostalgic outsider who returns home, it's also emblematic of one of the biggest problems of "Back in the Day", where 20 years have passed since high school and nothing has changed. Nobody has made new friends, they all still hang out with each other, nobody seems to have jobs that take up much of their time, and adolescent hijinx are still seen as fun. Rosenbaum fills the film with every high-school-movie cliché in the book, referencing "Sixteen Candles" at one point, and drenching the soundtrack in nostalgic hits from the '80s and '90s. Nostalgia needs to be grounded in something real, something true, in order for it to have any resonance. Otherwise, you're just left with a formula that was tired 20 years ago.

Jim's only regular gig after 20 years in show business is as the spokesman for All City Insurance. His face smiles out from the sides of busses and benches. He dates women who are too young for him. He looks back longingly on the days of his youth, where, apparently, stealing your buddy's clothes and letting him run naked through a public park was the high-point of friendship. He decides to fly back for his reunion. Amazingly, his three best friends from high school, Len (Kristoffer Polaha), Skunk (Harland Williams), and T (Isaiah Mustafa), are all available to pick him up at the airport.

Len, Skunk, and T are all married, and their wives are nags, scolds, or mousy women who turn into Kinky Monsters in the sack. The guys go out for drinks, throw around homophobic barbs as jokes, and run into Angie (Liz Carey) who was a cheerleader in high school and is now pregnant with her fourth child (fathers unknown). Her pregnancy doesn't stop her from smoking, downing shots and hitting on all of the guys at the table. She is treated as grotesque by everyone in the film. Meanwhile, Jim runs into the aforementioned high school sweetheart Lori, who is now engaged to a guy named Mark (played by Jay R. Ferguson, aka Stan on "Mad Men"). Mark, turns out, was responsible for injuring Jim during a crucial football game back in the day. Lori is getting married the following week, and yet Jim still starts to make the moves on her, even though she appears to be happy with Mark.

Things follow as you would imagine. The four guys bond by hanging out in the parking lot of the local Pizza King, stripping their friend down naked while he's wasted and egging the house of the still-hated principal. No wonder their wives are annoyed. The film is pretty gross, featuring vomit, fecal matter, and multiple farts in almost every scene. The assistant principal turns out to be the gay lover of the principal, and you know how we know he's gay? Because he shows up at the door of the egged house, and he's actually holding a little yappy dog. Haven't we moved past the days of "St. Elmo's Fire", when the one gay character is shown swishing through the hallway holding a girlie drink with a colored umbrella in it? Even more disturbing, in "Back in the Day", the fact that the principal turns out to be a gay man is supposed to make us see him as ludicrous and worthy of mockery. The four guys are always joking about having anal sex or raping each other. They live in terror of penetration. I get that this is sometimes how guys talk, but it's not treated honestly here. It's an unexamined cliché of male bonding. It's lazy.

Turns out, Mark isn't so bad after all. He refuses to sleep with the half-naked stripper at his bachelor party because he doesn't want to be unfaithful. At night, Lori and Jim lie in the grass of the football field where they lost their virginity to one another, flirting and talking about high school. Which was 20 years ago, kids.

The film is shot in a pretty stock manner, with jokes falling flat (when one does land, it feels like a miracle) and musical cues guiding us toward appropriate emotional responses. There is one funny scene with a competitive whiffle ball game shown in urgent slo-mo, as though it is a re-cap from the World Cup, but it doesn't even begin to lighten the mood. 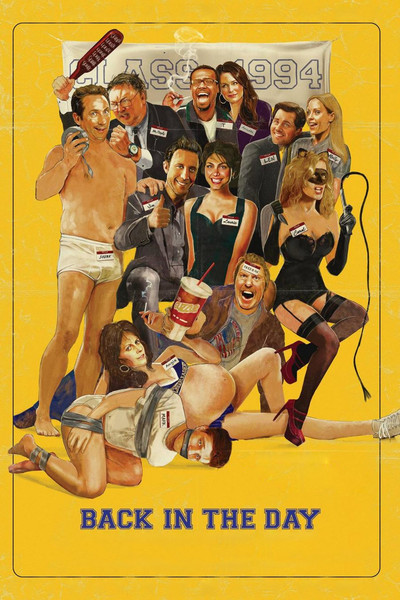