As It Is In Heaven

"As It Is in Heaven," the feature debut of director/co-writer Joshua Overbay, distinguishes itself from other recent indie dramas about religious cults by making its villain its lead protagonist. Several of the film's other characters are more sympathetic, but "As It Is in Heaven" starts and stops with David (Chris Nelson), a troubled zealot that may or may not be a prophet. Every other character in the film is of secondary importance since they all rely on, or react to David's instructions. This is especially striking since characters like Eamon (Luke Beavers), Edward's son, are viewers' way into the world of "As It Is in Heaven." We watch and experience their world in a daze because David's emotions are mostly inaccessible. Overbay's film is an accordingly tantalizing experience, one where viewers watch helplessly as they see how, in a faith-based community, there is no way to know who is right and who is wrong. "As It Is in Heaven" ultimately doesn't go anywhere unexpected, but it does foster a potent, unexpected bond between its subjects and its audience.

After the death of cult leader Edward (John Lina), David leads a small group of unidentified fanatics in a month-long fast. He tells his fellow converts that the world will end after 30 days, and that they must let their faith sustain them. These demands shock and unsettle David's followers, most of whom are undistinguished from each other. But what really shakes the group up is the fact that David was, until Edward's death, just as fallible as they were. Who is he to presume to take Edward's place so soon after his death? This unspoken doubt plagues Eamon in particular, especially once fellow cultist Deb (Shannon Kathleen Baker) is forced to feed her infant child behind David's back.

The film begins with Edward baptizing David because "As It Is in Heaven" is a conversion narrative. It's about characters that want to believe they're making the right choices, but don't necessarily know enough to make informed decisions. Nevertheless, by believing in David, Edward's followers are making choices. Overbay doesn't sensationalize or condemn his characters by showing them agonizing over their actions or physically suffering. Instead, his film is about the outward appearance of calm and acceptance that characterizes the film's post-Edward environment, which isn't to say that we don't see characters protesting David's instructions. Even David is sometimes shown to have doubts, as when he returns to the river where Edward baptized him, and struggles to feel the surge of love he felt when Edward converted him.

The main strength of "As It is in Heaven" is Overbay's commitment to making David, and his followers consistently act like they want to believe. Edward/David's followers are defined by their passivity, so Overbay focuses on their material actions, especially their body language. He sparingly films characters' faces in extreme close-ups because he wants to present characters' inner lives through their surrounding environment. A crack of sunlight filtering through an open barn door says a lot about protagonists' deceptively troubled headspace, as does a thoughtfully-composed image of Edward's disembodied feet sticking out of the camera frame's left-hand corner when David visits his surrogate father's death bed. This is how Overbay's characters define themselves, whether they realize it or not: as willing prisoners of their own expectations.

That sympathetic perspective is refreshing; Overbay allows viewers to experience cult life without dehumanizing his characters. "As It Is in Heaven" is deceptively assured in that sense. Overbay's film is so focused that it never distracts viewers from the fact that its central conflict is essentially internalized. David's followers want to believe in the power of community and routine. The film is about living in a commune where individuals are distinguished only by their roles in a group and people are united in their fearful anticipation of the end of the world. "As It Is in Heaven" is a fairly quiet drama, and it sometimes appears to be wisp-thin in its ambitions. But there's a lot to be said for a film that invites you into a community of outsiders, and makes their struggles real, without turning them into scapegoats or monsters. 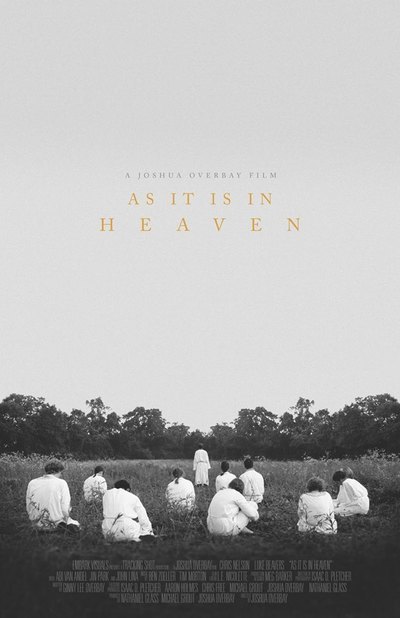