It took 20 years for an “Artemis Fowl” movie to come out, and now that it’s here, the film itself feels like it’s in a hurry to be over already.

After cycling through various directors and scripts, getting mired in the Harvey Weinstein morass and postponed following both the Disney/20th Century Fox merger and the Coronavirus pandemic, the film version of Irish author Eoin Colfer’s beloved tween fantasy series is nothing if not resilient, and now arrives under less-than-ideal circumstances in streaming form. But Kenneth Branagh’s big-budget extravaganza, based on a screenplay by Conor McPherson and Hamish McColl, is a glossy and empty exercise in world-building. It crams elements of the first two books into a running time that’s just shy of 90 minutes, sacrificing character development and real drama for briskness and whimsy. The premise isn’t all that complicated—there’s an underground world of fairies, trolls and other mythical creatures that a wealthy, wise-beyond-his-years boy learns to navigate—and yet the script places a great deal of burden on Josh Gad, who’s saddled with doing a ton of hand-holding narration for the audience, often describing things we can plainly see with our own eyes.

And the titular character at the center of this adventure, the brilliant and rebellious 12-year-old Artemis Fowl, ends up being a dazzled, wide-eyed pawn rather than a driving force. We’re told early on by Gad’s scruffy, thieving dwarf Mulch Diggums: “Do not underestimate the kid.” But as played by sweet-faced newcomer Ferdia Shaw, Artemis is more of a spunky and subversive troublemaker than the devious criminal mastermind who anchors Colfer’s books. He’d rather surf than go to school, and do you blame him? Artemis has been softened to make him more accessible, which only makes him less interesting. Nevertheless, he is our conduit between the human world and the land of leprechauns, sprites and the like, and so we must follow him, dull as he may be.

When globe-trotting antiquities dealer Artemis Fowl Sr. (a too-brief Colin Farrell) goes missing while on a secret mission, the younger Artemis realizes all the legends his dad told him over the years were true. He must team up with some of those fantastic beasts (and tussle with others) to rescue his father, as well as retrieve a valuable, shiny doo-dad that’s super powerful in the fairy world but dangerous for human use. It resembles a glowing, golden butt plug.

This is essentially “Spy Kids” with greater ambitions and more elaborate visual effects. But it does have its moments; Branagh, after all, has shown an eye for striking lighting and imagery when he’s helmed larger productions like this and his live-action “Cinderella.” The sprawling and ornate Fowl Manor, which sits atop a cliff along the dramatic Irish coast, is impressive. Haven City—the underground realm that’s home to the LEPrecon fairy police force, run by a pointy-eared, bored-looking Judi Dench—is an intriguing mix of rough-hewn and high-tech. Among her crew is the eager, big-eyed elf Holly Short (Lara McDonnell), who has a plucky and pleasing presence. At least she gets more to do than Tamara Smart, an afterthought as Juliet, niece of Fowl Manor’s loyal butler, named, appropriately, Butler (Nonso Anozie, who’s trapped in the most jam-packed subplot of all). She’s basically been asked to show up and run from a troll.

But wait! We can’t forget about Gad’s Mulch, whose capture and interrogation by MI6 bookends the proceedings and whose often-unnecessary voiceover provides the film’s structural spine. He shows up to pick a pocket or two and fast-talk his way out of every tricky situation—often with out-of-nowhere pop culture references to Foreigner and David Bowie and such, which feel forced and are never funny. But with his scraggly hair and shaggy beard, he looks as if he just wandered in from a Phish concert; he, too, joins in the adventure, ostensibly for comic relief. Nevertheless, there’s always another fearsome creature, another giant set piece or fight scene, with a frantic score urging the action along. There’s a great deal of exertion on display but very little magic.

“The time freeze is going to collapse any second now!” yells the tech guru centaur back at headquarters (Nikesh Patel), a warning which is supposed to be significant within the craze of noise and the whoosh of flight and the pew-pew-pew of lasers being fired from ancient-looking weapons. But it’s all going to come crashing down soon enough anyway. 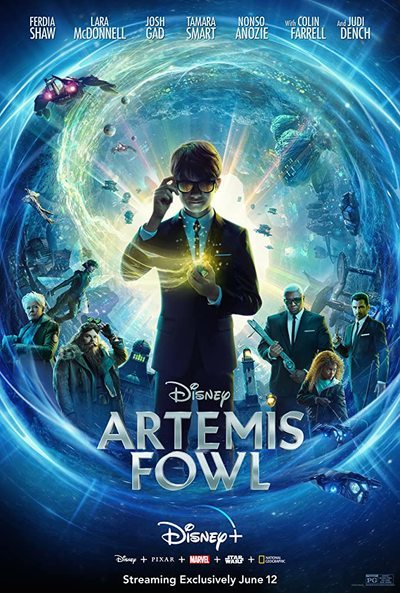 Rated PG for fantasy action/peril and some rude humor.

Colin Farrell as Artemis Fowl I