Resurrected in 4K for the benefit of new unsuspecting audiences, “Arrebato,” a 1979 Spanish psychological horror film, debuts theatrically for the first time in the U.S. this week. For four decades it’s marinated in the strangeness of director Iván Zulueta’s vision, which became a cult classic in its home country for good reason: its homoeroticism, laced with heavy drug use, propels a phantasmagoric trip where cinema is a soul-draining vampire.

Celluloid under inspection in the cutting room displays the final frames of the latest low-budget production by José Sirgado (Eusebio Poncela), a horror film director, who argues with his editor over an abrupt ending. Stubborn and dissatisfied, the storyteller, whose prominent eyelashes and angular face grant him a contrasting seraphic quality, heads home, unknowing of the tenebrous package that awaits him there.

When viewed today, the film doubles as a time capsule of analog technology and culture. As José drives around the streets of Madrid—pointing his gaze towards the many movie houses projecting imported popular titles such as “Superman,” “Quo Vadis,” and “Bambi”—there’s a brief echo to the image of New York City in “Taxi Driver,” with its blinding lights that fail to fully hide what’s festering underneath.

But though this is also a character disenfranchised from the mainstream, José resides on the opposite side of Travis Bickle’s righteousness, given that he is a cocaine and heroin user. His on-and-off girlfriend Ana (Argentine actress Cecilia Roth), also a consumer of the illegal powders, encourages and partakes in the cineaste’s self-destructive behavior.

Amid an episode of groggy frustration, he listens to the tape that came in the mail from a puzzling acquaintance. The voice is that of Pedro (Will More), an eccentric man in his late twenties who appears and behaves as if he was much younger. His narration of the unnamable occurrences sends the story into a significant flashback of how they met. Zulueta processes the narrative as part hallucination at all times, persuading the viewer to accept that we are in a distorted plane, where reality slowly fades into the background.

With a voyeuristic streak akin to Norman Bates, Pedro pathologically captures time lapses of everything around his rural domain using a Super 8 camera. Meeting José, who he perceives as a real filmmaker from the capital, serves as a dose of inspiration for the perturbed adolescent trapped in a deceiving body. The “arrebato” (rapture) that he so vehemently references throughout refers to the trance-like state that overtakes him when filming people, places, and things he’s never seen before; when narcotics send him into similar ecstasy, or when he's near a tangible memory (a toy or a sticker from childhood) that preserves his juvenile capacity for wonderment.

The message is both a warning and an invitation. Zulueta doesn't spell anything out—not the precise mechanics of the otherworldly occurrences that slowly but relentlessly debilitate Pedro, nor the true nature of their interest in one another—and that increases our bewilderment. Visually grounded in the disarray of a functional addict’s home and enhanced by the texture and lighting familiar to many works from that period, even the more outlandish swings involving sentient objects come off as plausibly tactile.

Film stock is alive in "Arrebato" as a ghost that feeds from the energy of those who need it to understand themselves through the moments made eternal. Knowing this, Pedro is incapable of stepping away, completely submissive to the wills of the physical embodiment of the imagery. Likewise, an enraptured Zulueta makes choices under such moviemaking incantation. A shot of a needle piercing the skin in a close-up, along with the editing tricks that augment the otherworldly atmosphere, come from that desire of manipulating the beast that tortures and nurtures to express something that must be felt not told. This is storytelling pulled from the viscera; it is inherently flawed, but impassioned.

Irreverent master Pedro Almodóvar has declared himself a fan of Zulueta’s film for its pop aesthetic and brazen depictions of undefined sexuality and scandalous vice. But Almodóvar’s ties to the director’s offbeat creative sensibilities run deeper. Engrossed by Zulueta’s work as a designer, he commissioned him to design posters for his early works, “Labyrinth of Passion” and “Dark Habits.” The latter of those titles also starred More, an enigmatic actor who faded into near anonymity after just a few credits, perhaps consumed by the demands of a medium that takes more than it grants, like his character, Pedro.

Troubled by his own heroin dependency, Zulueta, who died in 2009, only directed two features, his debut “Un, dos, tres ... al escondite ingles” and “Arrebato.” With that context, this mesmerizing intersection of an artist’s passion for image-making and addiction seems to emerge from first-hand experience through all its inventive, over-the-top bizarreness.

“Arrebato” invokes cinema as an otherworldly entity that possesses, just as addictive and destructive as mind-altering substances injected into the bloodstream. The camera itself is an apparition that devours the lifeforce from those enraptured in its powers. It’s a movie about losing oneself to the dangerously numbing power of experiencing life on a different level of consciousness, whether chemically induced or through a lens. The more removed the men are from devastating sobriety, the closer they are to being forever trapped inside the reel. To an extent, aren’t all cinephiles susceptible to such fate?

Opening in NYC today and LA on October 8th. 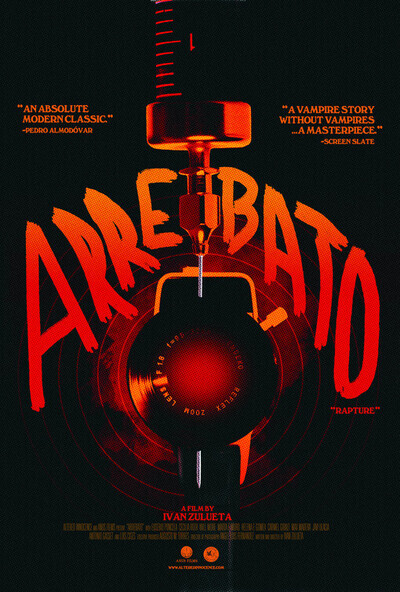 Will More as Pedro