A comedy with no laughs. A drama disconnected from any known reality. It’s tempting to diagnose “Are You Here” with schizophrenic genre disorder. But that just sounds like an excuse to cover up what it really is, an unmitigated mess that feels the need to present yet more iterations of that tired Hollywood species known as man-child run-amok-ous.

Sometimes it tries to be a “Broadcast News”-style comedy, with Owen Wilson as the type of smarmy philandering moocher he has done countless times before. The difference here is that he is a local TV weatherman in Annapolis, Md., who makes Bill Murray’s on-air forecaster in “Groundhog Day” seem like a paragon of repeated virtue.

Wilson’s Steve Dallas is a regular one-man rodeo all right—full of bull and proud of it. He has a constant need to have a potential bed partner at the ready at all time—be it co-worker, casual pickup or prostitute. He also has a propensity to peep at his shapely across-the-way neighbor as she disrobes in front of her windows each night, and not in a Jimmy Stewart non-creepy way. Then there is his charming habit of pretending to be able to pay the bill with his worthless credit cards and his constant use of mind-altering substances even on the job.

Other times, “Are You Here” appears to be a portrait of a dysfunctional family in the vein of “August: Osage County” when Steve’s best—and seemingly only—friend, Ben, learns that his father has died and the funeral requires a road trip to rural Pennsylvania. To mention that this hirsute near-hermit, manic-depressive idealist and fellow pothead residing in a mobile shack whose interior decorator was obviously the Unabomber is played by  Zach Galifianakis is akin to stating the obvious.

There is even a hint of “Witness,” as Amish folk occasionally materialize and then quickly take their leave in a possible attempt to add some existential folksiness to the over-reaching muddle that unfolds onscreen. An enveloping plot of sorts exists, one that involves the ever-popular contested last will and testament, but it struggles to tie the overload of random themes together.

The most astonishing fact about “Are You Here” is not the casual insertion of a pseudo-incestuous sex scene that no sane person would ever want to see. Nor that there is an actual chicken running around with its head cut off at some point. Or even that a talent so above this enterprise as Amy Poehler agreed to play Ben’s sister, a miserable shrew defined by her harsh eyeliner and seething dissatisfaction tied to her inability to have children.

No, the most shocking thing is that Matthew Weiner is the perpetrator behind this sad enterprise. It took the much-lauded creator of TV’s “Mad Men” and invaluable contributor to “The Sopranos” eight years to bring this foolhardy venture to theaters. “Are You Here” is not his actual feature debut—that would be a tiny 1996 effort titled “What Do You Do All Day?”—but it’s the first to see the light of day. As a frustrated would-be movie director, it feels as if he’s dumped every brainstorm he ever had on the screen, including a prominent farmhouse kitchen sink, with little desire for self-editing.

And shame on the man behind such complex female characters as Peggy Olson, Joan Harris and Sally Draper for inventing such a passive creature of desire as Angela (Laura Ramsey, who appeared in “Mad Men’s” “ The Jet Set” episode), Ben and Terri’s impossibly young, earth-mama stepmother who swans about in filmy white ensembles even though she lives and works on a farm. She exists only to fulfill the fantasies of men, including Wilson, Ben and his father, who felt compelled to provide extensive nausea-inducing details of their sexual history in his will.

I have to give credit to Weiner for one achievement: He makes some sharp casting choices among his supporting ranks. He has obviously watched series other than his own, considering that he is smart enough to hire Paul Schulze, so good as pharmacist Eddie on “Nurse Jackie,” as Wilson’s boss and Lauren Lapkus, the female prison guard Suzanne on “Orange Is the New Black,” as his fawning co-worker. But if Matthew Weiner weren’t Matthew Weiner, there would be no way this script would attract the likes of director Peter Bogdanovich (who also did “The Sopranos”) as a judge and Edward Herrmann as Ben’s therapist or convince Jenna Fischer of “The Office” to show up in the final 10 minutes or so in a nothing role.

Maybe Weiner deserved this chance. Maybe he has gotten it out of his system. But maybe he should be more concerned about putting together a satisfying finale for “Mad Men” next spring (he already told “Rolling Stone” he is anticipating mixed reviews) rather than tilting at such a flimsy windmill of a movie. 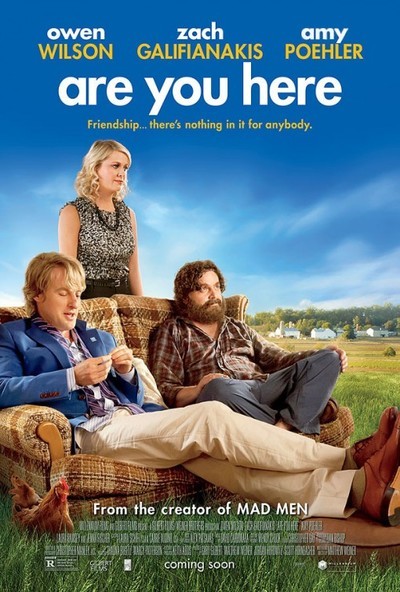