Gael Garcia Bernal and Alice Braga, two performers of considerable charisma, and even soulfulness, ought to make an exemplary onscreen couple. You’d think. And the pair is certainly not wasted in “Ardor,” a visually sumptuous kind of contemporary eco-Western (sounds more complicated than it is, honest) from Argentine director Pablo Fendrik. But what chemical reaction they try to roil never accelerates to a really satisfactory level.

Braga plays the daughter of the owner of a large tobacco farm. In the surrounding forest, a small group of mercenaries, three tetchy brothers, wander and loom and wait to strike. Out of the Amazon emerges Bernal, a largely silent and perhaps supernaturally blessed being. (A text at the beginning of the film tells of pagan rituals performed in Latin America to protect land from harm.) Disaster strikes in spite of the stabilizing presence of the tattooed, capable Bernal character, who’s never referred to by name but is called “Kai” in the film’s credits. During the disaster, which entails the death of the farmer and the abduction of Braga’s Vania, Kai lays back a little more than a conventional hero might be expected to. It’s part of the enigma of who he is, we suppose, eventually. But soon Kai is on the trail of Vania and her captors. The bros, whose interplay is pretty macho-rote (the older brother feeds the most potentially trigger-happy one multiple bromides about how one becomes a man) are in the hire of wannabe land grabbers and their deforestation efforts. Kai is shown to be not just for Vania, but for the land and all its creatures: at one point he’s seen meditating in a particularly lush part of the forest while a wild jungle cat placidly gazes upon him.

Soon Kai is freeing Vania, tricking the bad guys, and declining to kill, at least until he absolutely must. So what have we here? Some amalgam of Sergio Leone, Werner Herzog, and “Puma Man?” Not quite. The film is beautifully shot by Julián Apezteguia, and boasts a few effective and authentic-feeling scenes of jungle and tobacco field action. But Fendrik is a little too insistent on taking the film into the mystic—the movie is replete with seemingly unmotivated dissolves, which I suppose aim to create a feeling of expanding time, but just play as seemingly unmotivated dissolves. And the interplay between Bernal and Braga, while smoldering and up to a certain point steamy, is also a bit on the humorless side: both actors look as if they’re being compelled to hold back their sparkle. Fendrik has a statement to make about nature in the balance. But the film itself falls short on two crucial levels: it’s neither sufficiently profound nor intoxicating enough to justify or transcend its self-seriousness. As good-looking as the movie and its stars are, “Ardor,” whose title refers to a literal state of burning, never manages to catch fire. 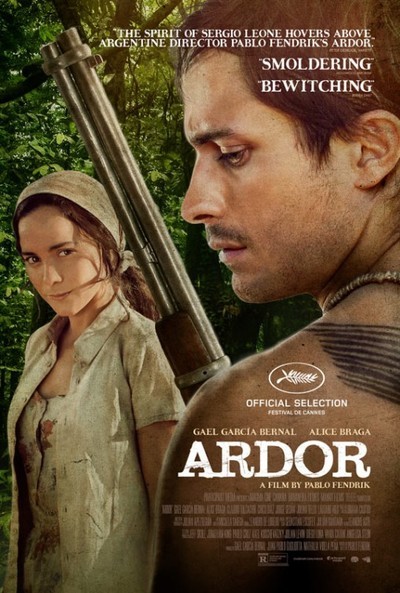