The number in the title of "Apollo 10 1/2: A Space Age Childhood" refers to the age of its hero and narrator, Stan (voiced as an adult by Jack Black), a fourth-grader who gets pulled into a top-secret mission by the National Aeronautics and Space Administration. In the run-up to the Apollo 11 moon landing mission, Stan, a resident of suburban Houston, is recruited by two government agents straight off the playground to become, essentially, a proto-astronaut.

The entire thing is absurd on its face, but director Richard Linklater cops to it, and presents Stan's story in a drolly convincing as well as affectionate manner, with a fanciful tone that rarely shades over into cuteness, and visually assured direction (the rigors of animation sharpen his compositions—and this is done in a far more "realistic" style than the director's previous efforts in that vein, "Waking Life" and "A Scanner Darkly").

It's questionable whether viewers the age of Linklater's protagonist will find much to hold their attention after the prologue, when it becomes an extended reminiscence about American life in the late 1960s, focused on the suburb of Texas's largest city, which is flush with cash and national attention thanks to the space program being anchored there. Virtually the entire film is narrated, and there are stretches where you may feel as if you're watching a gracefully edited slide show with moving pictures. It's less cinematic than verbal at times, the pictures mostly serving the words.

Stan's mind jumps all over the place, and we realize that what we're really seeing is a jumble of memories and perceptions from a grown man who is still a child inside, and whose personal experiences have become fused to the popular culture he consumed (everything from TV's "Dark Shadows" to Dick Cavett interviewing Janis Joplin to Robert Altman's space adventure "Countdown" to the ascendant, Joe Namath-led New York Jets swirl through his account).

There are also, thankfully, nods to what was happening in the parts of America that cared less about the space race than what was happening in their neighborhoods and homes, from the fear of losing young men not much older than Stan in the jungles and rice paddies of Vietnam, to the ascendant feminist and Black Power movements that took issue with the federal government spending billions to land white men on the moon and show up the Soviets when poverty and discrimination were festering down on the ground.

Linklater's movie never really builds up any kind of head of steam, and it's not exactly the kind of film you finish and say, "I hoped that would never end"—90 minutes and change is the running time, and that feels about right, given the personal essay-type nature of it all. But Stan is a thoroughly likable storyteller, and there's something to be said, in an era when Hollywood couldn't care less about any idea not based on an pre-existing property, for intimate, personal films that don't take you where you think you want to go. Instead, a film like Linklater's brings you inside the consciousness of a person whose perceptions of the world are simultaneously constrained and curious, and open to new experiences. 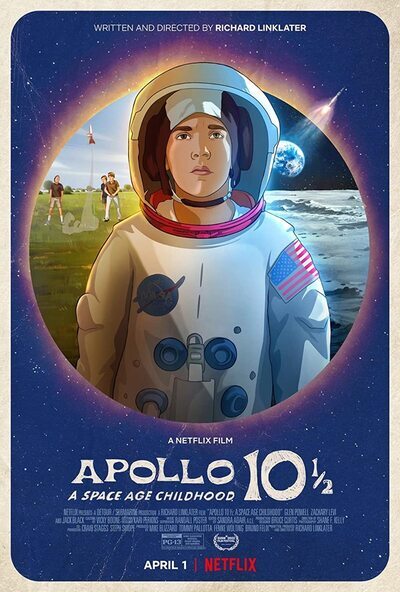 Rated PG-13 for some suggestive material, injury images, and smoking.