Psychedelic horror film "Antibirth" is a tough sell for even some of the most diehard genre fans. Stylistically, the film is equally unsettling and evocative: gorgeous cinematography, disorienting editing and frequent use of double exposures bring to mind the films of David Lynch, Rob Zombie, Ben Wheatley, Bill Lustig and Damon Packard. But on a narrative level, "Antibirth" is populated almost exclusively by obnoxious, irresponsible, and/or ugly characters. Anti-heroine Lou (Natasha Lyonne), a scruple-less alcoholic and drug abuser, is the most aggressively unlikable character in the film—and she's the film's lead. Still, you don't have to care about Lou as a person to want to know what happens to her after she blacks out during a night-long bender. "Antibirth" is novel, mysterious, and sometimes even dangerous enough to suck you in if you surrender to its confrontational, avant garde style.

Set in a skid row community of druggies, boozers, and military veterans, "Antibirth" sometimes feels like an ungainly combination of "Rosemary's Baby" and "Jacob's Ladder." Lou becomes obsessed with the idea that she's pregnant, though she is certain that she hasn't had sex in months. She is driven almost exclusively by her id. She guzzles tequila, smokes cigarettes, and eats unhealthy snacks with abandon, and rants at best friend Sadie (Chloë Sevigny) about what she will do if she's actually pregnant. Lou curses, mooches off of her friends, watches cartoons, and eventually pushes everyone away. She's not just unlikable: she's often abhorrent.

This movie is peculiar. Its pacing is all-over-the-map. Violence sometimes threatens to break out, but it rarely does in the ways you might expect. Sex is creepy, but sometimes gross in a funny way. Secondary characters, like conspiracy theorist and good samaritan Lorna (Meg Tilly), come and go without much consistency. And while protagonists are often characterized through realistic dialogue (lots of cursing, vernacular, and naturalistic pauses), they're just a dream sequence, pot-induced flashback, or song cue away from becoming subsumed by elusive dream logic. Oh, and this film is also kinda funny, but never in a laugh-out-loud way. It's icky, mean-spirited and bizarre. And I left it feeling like I had just seen something new; I wanted more.

Which is weird because, on a basic narrative level, "Antibirth" completely rubbed me the wrong way. I don't like Lou, and I don't think I'm supposed to. Perez makes sure of that by pushing viewers' buttons with early lines of dialogue like, "I think I'd remember if I had a dick inside me." Still, as the movie goes on, the film's slippery tone becomes a little more palatable. Lou's constant self-endangerment may have made me feel like a concerned parent, ready to tsk-tsk her every time she picked up a bottle or bong. But as the film goes on, you get the sense that Perez is intentionally piling it on for the sake of seeing how far he can go while luring you in despite yourself. Trippy images of eerie silhouettes and creatures that look like the love-children of "Teletubbies" and the gremlin from "Nightmare at 20,000 Feet" are simultaneously bewitching and disturbing.

I've made this review as impressionistic as possible because the main pleasure of watching "Antibirth" comes from questioning your own sanity as you watch it. How can a movie be so ugly yet so tantalizing? It's very easy to be turned off by Perez's feature debut, but if you can get on its wavelength, you'll find yourself drawn in by one of the year's most original horror films. 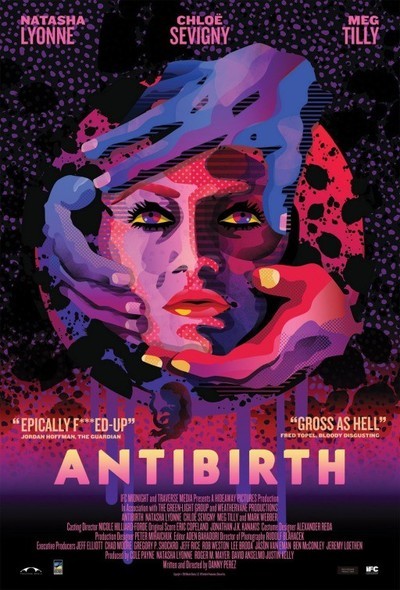