Anna and the Apocalypse

Comedy and horror are such strange bedfellows. As an odd couple, they’ve spawned movies like Mel Brooks’ “Young Frankenstein,” Tim Burton’s “Beetlejuice” and Jordan Peele’s “Get Out.” Except for perhaps Burton’s adaptation of the Broadway show “Sweeny Todd” and Frank Oz’s “Little Shop of Horrors,” few movies in this Frankensteined subgenre have gone so far as to put on the ritz as boldly as John McPhail’s Christmas-themed zombie comedy, “Anna and the Apocalypse.”

The Anna (Ella Hunt) of the title is an adventurous high school senior looking forward to taking a gap year before college to see the world outside her home in Scotland—if her overprotective dad (Mark Benton) doesn’t get in the way of her plans. After school, she works in a bowling alley with her best friend John (Malcolm Cumming), who mostly keeps his feelings for her at bay. The two are friends with a set of lovebirds, Chris (Christopher Leveaux) and Lisa (Marli Siu), and unknowingly share their schoolyard disenchantment with the campus’ resident activist, Steph (Sarah Swire), an American student just dumped by her girlfriend and whose parents have left her alone for Christmas.

But by the next morning, their ho-hum spirits feel like a moot point in the wake of the zombie apocalypse. Anna and John encounter their first monster on their way to school and decide to take shelter back at their bowling alley, where they run into Chris and Steph. The audience and performers in the school’s Christmas show—which includes Anna’s dad and Lise—lock themselves in the cafeteria at the command of the uptight principal, Savage (Paul Kaye). Now, the group must reunite with their loved ones at school before it’s too late.

“Anna and the Apocalypse” shares much in common with Edgar Wright’s breakout zombie comedy, “Shaun of the Dead.” Each movie revels in the grotesque task of killing zombies, setting up comical ways for our heroes to fight back with vinyl records or pointy lawn ornaments. The scene where Anna puts in her headphones for an upbeat musical number as zombies tear through her neighborhood resembles the morning after the scene when Shaun repeats his morning routine without noticing zombies have eaten his neighbors and likely the convenience store clerk. McPhail also includes one quickly edited montage of the group getting into a car and driving away as a stylistic nod to Wright’s frenetic cuts.

The movie’s many pop songs add to that energetic spirit. Like a scrappier, naughtier “High School Musical,” the teens will sing about not fitting in, not having their feelings reciprocated. At times, the transitions to verse are a little rough, but some of the numbers are so bizarre, it’s easy to laugh. In one song, the principal chides students for tweeting their every empty thought, in another, a group of bullies kill zombies as they’re belting out a masculine tune. For Lisa’s Christmas show performance, she sings a filthy song so full of double entendres, it might have made Ernst Lubitsch proud. Of course, that’s not all she has in store, as mid-way through her song, six shirtless men in red shorts and suspenders flank her to drive home her number’s sexual overtones.

The playful spirit of “Anna and the Apocalypse” extends to its cinematography, where it swings wildly from colorful spaces like the Christmas show stage to the greyest shade of grim outside during the zombie invasion. Those visual contrasts amp up the already odd coupling of death, destruction, high kicks and high notes. In a saner movie, those two different color palettes may have looked too jarring but it works in the movie to play up the chaos—much of which takes place off-screen or in quick doctored shots of the town. What the movie lacks in budget, it makes up with spunk.

How many other Christmas-themed horror comedy musicals have such catchy songs, smart jokes sprinkled throughout suspenseful moments, and an ensemble dedicated to pulling it off? “Anna and the Apocalypse” is a gift for the midnight movie crowd that’s just as liable to break out into song as to celebrate each major zombie kill. It’s one of those rare horror movies to leave you with good holiday cheer. 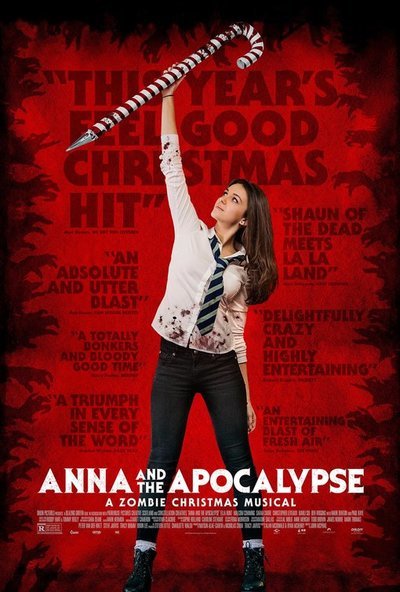 Rated R for zombie violence and gore, language, and some sexual material.