I can't remember the last time I saw a mainstream film as afraid of its own best self as "An American Pickle."

Adapted by Simon Rich from his four-part serialized New Yorker story "Sell Out," directed by cinematographer Brandon Trost, and anchored by Seth Rogen's performance in two roles, the movie follows a time-traveling Jewish immigrant as he meets his assimilated American great-great-grandson in present-day Brooklyn. Ben, a pampered 21st century Internet denizen who could be Rogen's own self-caricature, confronts his great-great-grandfather Herschel Greenbaum, a resourceful, man with a hot temper and Golem fists: "Fiddler on the Roof"'s Tevye with anger management issues, and without the songs.

The narrative spine is a Rip Van Winkle story—a versatile template that encompasses everything from "While You Were Sleeping" to "Iceman." Herschel immigrates to New York with his beloved wife (Sarah Snook), lands a job killing rats in Williamsburg pickle factory, falls into a brine tub, and wakes up 100 years later. Buildings touch the sky. Carriages are horseless. Pictures and words fly through the air. His closest relative is Ben, an orphaned, book-smart city kid with soft hands. Ben can't speak Yiddish, never goes to temple, and sits at his desk all day making apps.

Herschel tries to earn $200,000 as an independent artisanal pickle-maker in order to buy and restore a neglected cemetery where his wife and descendants are buried. Meanwhile, Ben—who's been burdened with contrived reasons to hate Herschel—tries to sabotage him. Herschel bounces back. Ben knocks him down. Herschel rises up, Herschel goes down. Ben has regrets, Ben has no regrets, Ben has regrets again. And so on. You know these warring men will make peace. It's not the kind of film where they'd keep battling until one destroyed the other.

Here's the thing, though: "An American Pickle" didn't need the contrivances that fill up its midsection like a scoop of schmaltz between hearty slices of homemade bread. It was already a dialogue between past and present that was bound to end in reconciliation, or at least a wary truce. And it was already expressing its themes in a straightforward, affecting way, through Rogen's performances. It didn't need more reasons for us to give it our attention. We were already giving it.

"An American Pickle" is charming and moving whenever it is content to be a two-man play. That's where the dramatic and thematic action happens. And it happens mainly through Rogen's dual performance.

This is not a virtuoso star turn. Rogen is not technically facile enough to turn Herschel into a "Wow, I can't believe that was Seth Rogen" set of performances. He's no Meryl Streep when it comes to accents, and he's no Daniel Day-Lewis when it comes to transforming himself into a character from another century who has no access to his emotional interior and would have no reason to think he needed any.

But has a firm grasp on the idea of Herschel, the feeling, the fantasy, the longing that he represents. He gets this man. This man is the great, great grandfather of the Jewish American subconscious, with his cap and wool clothes and mud-stained boots and huge beard and fists that lay men out cold.

Rogen gets Ben, too, because Rogen is Ben with more money, and an entertainer's instinct. Rogen makes Hollywood films and does voices for cartoons. He lives in a big house with a refrigerator, air conditioning, and a soft bed. He drives a horseless carriage. And he's great on Twitter. The film might be the self-lacerating dream of a successful writer who looked at his life and wondered what his ancestors would think of it. When Rogen faces Rogen, the scenes are charged with self-loathing, but also an awareness of self-loathing as something rooted in culture and conditioning. At the same time, though, these scenes are suffused with respect for the multigenerational journey that transformed Herschel into Ben.

A similar mix of recrimination, pride, hero worship and self-mockery is present in Rich's source material, "Sell Out." Rich's story doesn't have any of the rise-and-fall stuff that pads out and diminishes "An American Pickle." It's confined to Herschel's perspective and validates his withering view of modern life. The old world peasant describes his great-grandson's dependence on high technology in these terms: "The computer is a magical box that provides endless pleasure for free ... When the box stops working—or even just briefly slows down—[a man] becomes so enraged that he curses our God, the one who gave us life and brought us forth from Egypt." His great-grandson confesses that he played 2 Live Crew at his bar mitzvah, hasn't been to synagogue in years, and once pretended to be a Christian in college to get free barbecue.

Still more fascinating are the quiet actorly duets at the end of the movie. The story gradually drifts away from America and is pulled back toward the old country. Herschel and Ben start to recognize themselves in each other. We, and they, realize that Ben always existed within Herschel, and that Herschel's spirit lives on through Ben.

It's here that the filmmakers dare to go deep without retreating into shallow conventions. "An American Pickle" trusts Rogen to carry the material and its meanings in the simplest way: by letting him play against himself, often in closeup. This dual performance is the best, purest thing he's ever done as an artist, in front of or behind the camera. There are maybe a dozen closeups of Rogen as Herschel and Rogen as Ben so honest and vulnerable that they wipe the smirk off the film's face and suggest that, despite his self-deprecating shenanigans, there's a part of Rogen that wants to be the millennial stoner dude's answer to Barbra Streisand. He has the ambition and talent to at least try it. What's missing is the nerve.

At its best, "An American Pickle" is a clever but accessible dialogue/argument between emblems of Jewish manhood. That the good parts are so distinctive and the bad parts so forgettable makes the experience more frustrating than watching a film that's just bad. This movie is the funny friend who thinks they need to be "on" all the time, even when baring their soul. 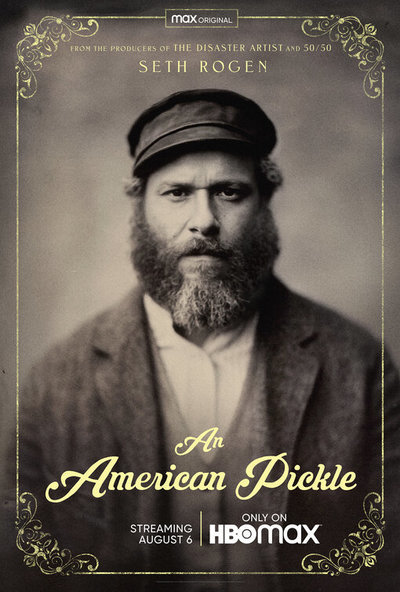 Rated PG-13 for some language and rude humor.

Writer (based on the short story entitled "Sell Out" written by)