Comedy is a mystifying art because there is no particular formula that guarantees its success. Ideas that worked brilliantly before can fail spectacularly when attempted again. If the chemistry is off or the writing is subpar, it doesn’t matter how hard a performer attempts to salvage a gag. When I recently spoke to Austin Pendleton, he said that he could never predict the life span of his comedies. “I don’t think anyone thought either ‘What’s Up, Doc?’ or ‘My Cousin Vinny’ would become classics that will live forever,” he told me. “In fact, if people think that when they are making a film, it doesn’t usually turn out very well.” Though I was not on set for “An Actor Prepares,” the third directorial effort of Steve Clark, it does seem like its cast had the notion that they were making—if not a classic, at least a funny movie. Its star, Jeremy Irons, certainly appears to be relishing his role as an unapologetically bad-mannered actor, savoring each profane syllable of his dialogue like a fine wine. His rascally grin gleams with mischief, and for a little while, that’s enough to sustain one’s interest. After all, Irons has the sort of voice that could make automated prompts on company phone lines thoroughly entertaining. Just imagine the sardonic nuance he’d bring to the debatable claim, “Your call is very important to us….”

Alas, “An Actor Prepares” failed to make me laugh once, aside from one poorly dubbed quip assigned to an extra as she strolls with her companion along the base of a towering Jolly Green Giant statue. “No Samuel, this does not count as a date,” she vows, and for a brief moment, I guffawed with gratitude. If only I could’ve followed those people, glimpsed only from an extreme distance, rather than remain stuck with the boorish pair at the center of Clark’s narrative. The script’s lethal miscalculation is the mean-spiritedness of its humor. Judging by the touch-feely songs selected for a tiresome array of montages, not to mention some strained heart-tugging in the final act, Clark clearly wants to spin a yarn about father-son bonding that will leave us with a lump in our throats. Yet the characters he’s crafted are so off-putting that our time spent with them quickly devolves into an endurance test. Irons plays Atticus, a veteran performer whose oft-praised filmography sounds more like a list of bargain basement porn titles (“Deep Stack Johnson,” “Throwdown at Bitch River” and “Five Day F—k” are among the highlights). The casual misogyny of his behavior is treated as some sort of endearingly eccentric character trait, and that causes the film to hit an especially sour note in light of Hollywood’s widely publicized complicity in sexual abuse.

When Atticus shoves his tongue down multiple women’s throats without their consent, while paying a 25-year-old makeup girl to relieve his 15-year-old son of his virginity, we’re expected to roll our eyes and shrug, “What a card!” He’s heaped the guilt of his own failed marriage onto his son, Adam, who has grown into a directionless man-child played by Jack Huston. Though Atticus was indeed cheating on his wife, he refuses to take responsibility for the pain he’s caused, viewing Adam as little more than a snitch. Perhaps fueled in part by his father’s appalling treatment of women, Adam throws himself into the realm of feminist film theory, spending years on a yet-to-be-finished documentary while teaching college courses before skeptical students. He fumbles for a coherent answer when questioned about what gives him the right to lecture about such subjects, and is exasperatingly inept at breaking crucial news to his “partner,” Clementine (Megalyn Echikunwoke), whom he refuses to call his girlfriend for fear of “infantilizing” her.

If Adam—and the film itself—truly cared about issues such as gender representation, then the character would’ve challenged his father’s sexist beliefs, engaging in provocative debates as they journey across the country on their road trip. Instead, the film wants us to chortle at Atticus doing lewd and outrageous things that we’ve seen in countless other pictures. Flashing his genitals in his son’s face, Atticus orders Adam to whip out his own member in order to demonstrate that he got the shorter end of the genetic deal. If the mere sight of a bare ass has you in stitches, this is a film for you.

As is true of many a paternal deadbeat, Atticus must keep reminding Adam that he’s about to die, if only to earn any shred of audience sympathy. After suffering a heart attack at the beginning of the film, Atticus is back to his nasty self in no time, making a dated jab at his son’s facial hair when Adam pays a visit to the old man’s hospital room (“It looks like you’re wearing Osama Bin Laden’s nut sack”). Since Atticus is not well enough to board a plane for his estranged daughter’s marriage in New York, Adam is tasked with driving his father to the ceremony, while harboring a secret of his own (he’s worried he may have testicular cancer). That subplot is just a flimsy excuse for jokes about guys fearing the loss of their balls, and Atticus is so spry and horny, I never bought for a moment that he was in ill health.

The script co-authored by Clark and Thomas Moffett is so sophomoric in its punchlines that it often feels like the extended draft of a failed sitcom pilot, with the picturesque B-roll of passing landscapes edited in to pad out the running time. Tony Morales’ score has the awkward task of goosing the audience with sudden comedic bursts, as if to fill in for the nonexistent laugh track. You can almost hear the soundtrack exclaiming, “Ooh, their tire blew out, and here comes a passing car! Better catch it!” I was reminded of the laughable music cues in Andrzej Bartkowiak’s pitiful screen adaptation of “Doom,” continuously amping up the viewer only to arrive at a dead end. Cinematographer John Bailey has some bonafide classics on his résumé (“The Big Chill,” “Groundhog Day”), but his visual approach here is as bland as can be, epitomized by the inevitable drug-tripping sequence involving little more than dissolves and a split screen. It’s enough to make one start pining for the psychedelic silliness of “Skidoo.”

I saw “An Actor Prepares” the morning after my viewing of Brian Henson’s “The Happytime Murders,” another comedy capable of filling a theater with a funereal air. My thoughts on that film could be succinctly summarized by this memorable exchange from “The Muppet Show”: “There’ve been wars started over less than that,” insists Waldorf, to which Statler replies, “You’re wrong. Nothing’s less than that.” Like that picture, “An Actor Prepares” is too lazy in its writing to rise above the sheer unpleasantness of its characters. Both movies might’ve been a ball to make, but they are a chore to sit through. Would the film have been funnier had it been released last year, prior to the Weinstein scandal breaking? I doubt it, though watching it now sure makes for a queasier experience, particularly when Matthew Modine turns up as a talk show host blatantly modeled after the disgraced Charlie Rose. Regardless of what happens after the final fade-out, there’s no question Atticus’ days are numbered. If another heart attack won’t end him, the #TimesUp movement will. 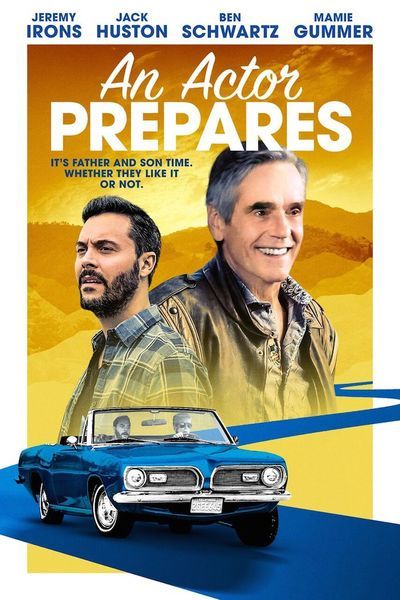 Will Patton as Wisdom