If you feel that the contemporary cinema isn’t serving up enough dirty-talking puppets to suit your proclivities and tastes, have I got a movie for you. “The Happytime Murders,” directed by Brian Henson under the aegis of a production company called “HA!”—for “Henson Alternative,” with an exclamation point!—is a movie in which Muppet-style felt characters (for yes, Brian is the son of Jim and Jane Henson) cuss and smoke and have sex to ostensibly comedic effect.

Dirty-talking puppets are nothing new; a history of Vegas entertainments would turn up dozens if not hundreds, and the recent Broadway hit “Avenue Q” has proven that they WORK, or can work. Executive produced by human star Melissa McCarthy and her husband Ben Falcone, “The Happytime Murders” is an indirect outgrowth of Henson’s “Puppet Up!” an improv show that had a prosperous run in, Las Vegas and New York a couple years back. In that show, puppeteers and their puppets presided over a traditional audience-suggestion set, the more outrageous the suggestions the better.

For “The Happytime Murders” writer Todd Berger world-builds a society inspired by that of “Who Framed Roger Rabbit”; tensions between toons and humans are here replaced by a society in which “meatbags” are entertained by but distrust “fluff”-filled felt-faced sentient beings. The conceit doesn’t work here nearly as well as it did in “Roger Rabbit.” The self-reflexive absurdity of that classic’s concept, epitomized by Jessica Rabbit’s famous line “I’m not bad, I’m just drawn that way,” doesn’t translate so automatically to this scenario. You don’t have to exercise your brain too hard to get a palpable sense of how an autonomous puppet is literally an oxymoron.

But “The Happytime Murders” isn’t so much interested in immersing you in a comedic world so much as it is in having its puppets do the most outrageous things you’ve never seen or heard puppets do in a movie. The plot is as fluffy as any of the puppets’ insides. Puppet P.I. Phil (Bill Barretta) gets thrown a case by femme fatale Sandra and soon, wherever he goes, another cast member of a once-famous puppet TV show, “The Happytime Gang,” gets the stuffing blown out of him/her. Turns out Phil was once a cop, a good one, until a mishap destroyed the force’s trust in him. The new string of murders puts him back together with his human partner, Connie (McCarthy), a good but now-bitter cop with a sugar monkey on her back. Just so you know, in puppet culture, sugar is pretty much heroin.

One doesn’t need to concern oneself too much with plot, what with all the puppet hijinks. They begin with the foul language, but in due time, we see puppets whose forms are pretty familiar—fluffy bunnies, frisky doggies, a porn shop proprietor that looks like a relative of Sam The Eagle gone severely to seed, and so on—doing generally unexpected things, like flashing pubic hair and ejaculating. Is this funny? The screening I attended did not exactly rollick with laughter, and I found scenes of humorous human interaction, such as an evidence hunt embarked on by McCarthy and Maya Rudolph, playing Phil’s loyal secretary, more amusing than the puppet stuff. But I don’t want to come down too hard on this movie, because even though it doesn’t work, the high spirits with which it was made seem unaffected. Which means that if you’re susceptible to such an atmosphere, particularly such a one as McCarthy and friends can create (other human cast members include Elizabeth Banks and Joel McHale; among the puppeteers is Kevin Clash, one of the original handlers of Elmo), you might get a kick out of it. But don’t bring the kids. Seriously. Just don’t. 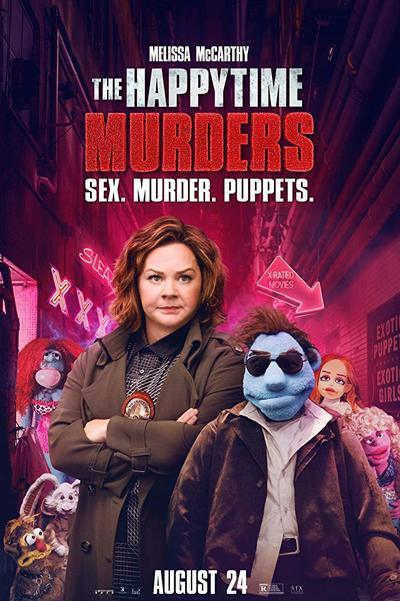 Rated R for strong crude and sexual content and language throughout, and some drug material.