Adapted from the quarterback's same-titled memoir, "American Underdog" has a distinctive, at times kooky vibe that's appealing, even as its cause-and-effect narrative doesn't explain how Warner managed to enter the National Football League from far outside the normal channels, and at an older age than was common. Simply put, the film kinda makes it seem like Warner went from being an un-drafted free agent to playing arena ball to the St. Louis Rams and a Super Bowl XXXIV victory mainly on the basis of being a decent and devout guy who treats his loved ones well and does the tedious, necessary work of daily life even when he doesn't feel like it. If that were the case, professional sports teams all over the world would be staffed exclusively with nice, caring people, many of them out-of-shape.

No matter. "American Underdog" was adapted and directed by Andrew and John Erwin, who make very successful movies for the American Christian market (including "Mom's Night Out" and "I Can Only Imagine"), and that explains the focus and messaging. This is a movie about virtue, commitment, and faith, and how if you possess and diligently maintain those qualities, good things will happen for you, if not immediately, then eventually.

Although "American Underdog" doesn't scrimp on football action—there are several sequences done on an appropriately grand scale—the focus is on Kurt (Zachary Levi) and his future wife Brenda (Anna Paquin). They meet in the early '90s, when Kurt, who played college ball at the University of Northern Iowa, is working at a grocery store and sending VHS highlight reels to recruiters, and Brenda, an Army veteran, is raising her legally blind, brain-damaged son, Zack (Hayden Zaller), after being abandoned by her cheating husband. The early focus is on the budding relationship between Kurt and Brenda, and surprisingly, that's where it stays.

Levi and Paquin are too old to convincingly play the characters at this phase of their lives (Levi is 41, Paquin is 38) and they've been fitted with unfortunate wigs, but their chemistry is excellent and they're both exceptional actors, so it's not hard to get past all that. The best thing about the film is its refusal to move according to the prescribed rhythms of the standard-issue sports picture. From start to finish, it prefers to focus on what's happening off-field. It returns to the gridiron only when it's time to set up the next career milestone, and the milestones are only important inasmuch as they affect the lives of Kurt, Brenda, and Zack. "American Underdog" is about a couple moving through the years and getting to know each other and look out for each other. This approach might be unique among sports films. The genre tends to reduce the hero's partner to a supportive figure standing on the sidelines (or a constantly crying person who wants him to stop playing for health reasons).

Early on, there's a nice, long scene where Kurt, who met Brenda at a local honkytonk club, shows up at her house to deliver a single red rose, only to realize that she's not there. Zack invites him in, taking him by the hand. Brenda's mother, who lives there, finds Kurt and Zack lying side-by-side on the kitchen floor (because that's what Zack wants them to do). She jokes that he must be here to see Brenda, and she's not concerned that he's an intruder because why would an intruder lie on his back on the kitchen floor next to a blind kid? The scene is so odd (in an appealing way) that it can only have come from life, and there are many scenes like it, including one set during icy winter wherein the family's car runs out of fuel on an interstate highway and Kurt has to leave them there and walk for several miles to fill a gas can and walk it all the way back. What does that have to do with football? Nothing, but it's the kind of thing that happens all the time, and you never see it in movies.

The problem, though, is that "American Underdog" doesn't ever really connect the modest virtuousness of Kurt and Brenda to Kurt's ascension as a quarterback. What makes the film unique among sports movies is the focus on the central relationship, and you could even go so far as to say that you could make the exact same movie about a man who drove a bus or managed a shoe store and went on to win bus driver of the year or shoe store manager of the year, provided that you could get the funding for a movie like that (a big "if"). Unfortunately, though, if the point were that this person came into the profession and became a huge success despite not being the kind of person who normally gets within shouting distance of such a dream, you'd still need to give audiences a sense of the qualities that allowed him to break through, other than repeating over and over, "He was a nice guy who believed in God and was good to his girlfriend and her son."

I realize that's the point of making this specific movie for this specific part of the entertainment market, and I have no idea how one would go about making such a film, but still, it's frustrating. That football doesn't care whether its players are good people could be the subject of a film about faith and values, too.

Available in theaters on December 25th. 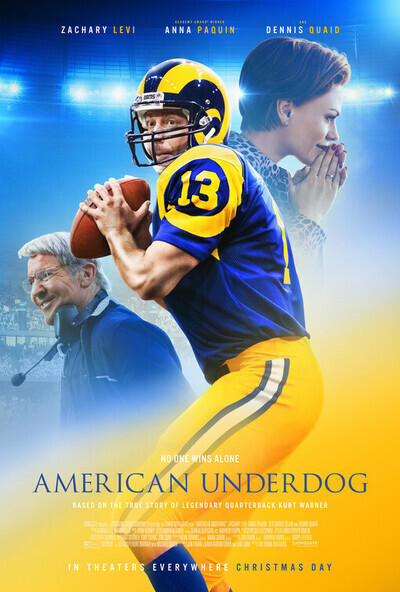 Rated PG for some language and thematic elements.

Writer (based on the book "All Things Possible" by)