11-year-old Gitty (Peyton Kennedy) listens as her father (Kip Pardue) tells her that where they live—the farmlands of Wisconsin—is the best place on earth. Later, when she asks him why they never go to any of the far-flung countries she's seen on the globe in the library, a flash of unease appears in his face. He doesn't have an answer, but his expression goes deeper than that. If she chooses to leave when she's old enough, is that a rejection of his way of life? His tomboy daughter, his partner in enjoyment of jokes and riddles, will grow up, will leave him. Loss flickers on the edge of the quiet moment. These are just two small scenes in Anne Hamilton's first feature as a writer/director, and they are the thematic underpinnings of the entire story, which plays out in a landscape aching with beauty and color and strangeness, a vivid Eden about to disappear. Hamilton has created a surreal and magical atmosphere for this melodramatic family thriller, and it is the atmosphere that dominates. Hamilton's ability to sustain the fever-dream mood established from the opening shots, as well as her interest in smaller moments pierced with intimate reality, makes it hard to believe she is a first-timer. "American Fable" is ambitious, maybe too much so sometimes, but there's an intense pleasure in the boldness of the film's style, its confidence in what it is about.

Gitty lives on the family farm with her hard-working father, her pregnant mother (Marci Miller), and an older brother Martin (Gavin MacIntosh) whose "teasing" of his younger sister is more psychopathic cruelty than anything else. It's the 1980s: Reagan is on television, and the catastrophic Midwest Farm Crisis, where corporations swooped down to snatch up family farms in foreclosure, is the air the family breathes. Gitty absorbs her parents' anxiety, peeking through doorways at their explosive arguments. A mysterious woman (Zuleikha Robinson), wearing long black leather gloves and sporting a curled up-do like Betty Grable, approaches Gitty's father at the county fair and speaks to him in private. Her father seems to know this woman. Dark forces are gathering. The family unit is threatened. Gitty doesn't have many friends but that's okay, she has her chicken (named Happy), and a wide-eyed appreciation of life. She's a curious child. When her father tells her to stay away from a derelict silo on the edge of a back field, she can't help it. She sneaks out to investigate, and finds a man locked inside. Because the entire film is shot from Gitty's point of view with very few deviations, it's not apparent at first if the man in the silo is real or not. He whispers at her urgently to let him out. He tells her he will grant her whatever she wishes if she helps him. He is part troll under the bridge and part genie/fairy-godfather. His desperation is palpable. He is played by the wonderful Richard Schiff, and as this man's story is revealed, as Gitty draws closer to him during her secret visits, he cracks open the darkness at the heart of her family, the deep disturbances that threaten to tear them all apart, bring them all down.

Hamilton, and cinematographer Wyatt Garfield, drench the film in weirdness, beauty, shadows and deep colors, angst-ridden camera angles, the surreal seeping into the everyday. (Hamilton cut her chops interning for Terrence Malick during "Tree of Life." She shows a similar sensitivity to nature, to different kinds of light.) Even early on, before the man in the silo, before the woman in the gloves, it's obvious that nothing is all right in this world. A routine family dinner sparks with tension, the camera peeking up from underneath the table. With the first shot in the film, showing Gitty pushing her way through ranks of towering corn, "American Fable" announces its intentions. This is a "fable," after all. A small child goes up against forces as intimidating and unified as those corn stalks stretching as far as the eye can see. Gitty's sense of dread is manifest all around her. A mysterious figure on a black horse is seen on nearby horizons, crossing the fields, circling the house. Something is coming for this family. Maybe this family brought it on themselves. Production designer Bret August Tanzer has made the farmhouse into a space terrifying and beautiful. The walls are a deep green, the furniture red, the night shines in through the windows cold and blue. This is not your everyday American heartland farmhouse. It is an emotional nightmare-scape.

Young Peyton Kennedy is a revelation. When her father tells her a bedtime story (she requests a scary one), she listens to him with engagement and humor, pressing him on in between phrases with little comments and laughter, and her behavior is so natural that it grounds those scenes—and that relationship—in the real world, as opposed to a sentimentalized version that we've all seen before. During the course of the film, Kennedy, who is in every scene, must move from innocent to experienced, from oblivion to knowledge. She gives an adult performance in its understanding of that painful coming-of-age arc.

"American Fable" displays its symbols proudly, in the way short stories sometimes do. The symbols don't have the resonance that some of Hamilton's singular images do: Gitty dangling from a rope, surrounded by the dark walls of the silo; children capturing fireflies at night in big jars; a truly spooky dream-sequence; the colors inside that farmhouse, the look on Gitty's mother's face when Gitty asks if God really loves them. These are the moments that stick, that persist once the film ends. Hamilton's images—more than the plot, more than the symbols, tell the story. (There should be a moratorium on the use of Yeats' poem "Second Coming" in film. It's one of the most powerful and prophetic poems ever written, but it's been so done to death it's become a cliche.) "American Fable" is an elegy to a way of life that has nearly vanished, a phantasmagorical imagining of what a real-world event like the farm crisis looks and—more importantly—feels like to an intelligent child. Loss pulses through the film in every frame. It's an extremely impressive debut. 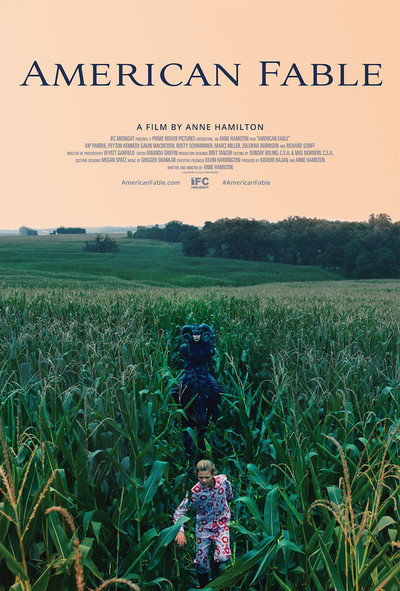