Errol Morris has a fondness for tackling controversial figures (Robert McNamara, Donald Rumsfeld, the guards at the center of the Abu Ghraib scandal and execution device designer/Holocaust denier Fred A. Leuchter, Jr.) not by confronting them head-on, but by carefully scrutinizing them as they tell their stories and justify their actions at length without overtly commenting on them. In theory, the idea of Morris applying this approach to take a look at Steve Bannon, the filmmaker and right-wing ideologue who became, however briefly, the chief strategist for Donald Trump and who continues to carry the flame for the man and the cause long after being asked to leave the White House, would seem to be an ideal match of documentarian and subject. Unfortunately, this may be the first time in Morris’ career that he has focused on someone who has actually seen his movies before talking to him—Bannon even admits that his own stabs at filmmaking were inspired in part by a viewing of the McNamara documentary, “The Fog of War”—and knows full well what to expect. As a result, “American Dharma” is a frustratingly hollow look at Bannon that is ultimately so benign in its portrayal of the man that it comes closer to an example of fan service than a full takedown.

The film finds Bannon delivering an extended overview of his history and political philosophy to Morris from within a recreation of an enormous Quonset hut. He explains how the discovery of the label “Made in Vietnam” on a sports uniform while visiting his daughter at West Point inspired his conviction that America needed to be saved from its more progressive and emotional impulses by embracing a hard-line ideology that values strength and alleged self-sacrifice over emotion and if the complete chaotic upheaval of the current system is required to push that way of thinking and allow the people of the nation to realize their so-called “dharma”—a sense of duty, fate and destiny—so be it. This mission would take him from Harvard Business school to a stint as a creator of documentaries that often flirted with being pure propaganda to a gig with Breitbart News before eventually landing in the White House, where he was able to briefly serve Trump, whom he continues to praise for his alleged willingness to be a leader willing to defend the idea of a Judeo-Christian ethic that has been twisted by the forces of globalization and multinational corporations. His narrative is broken up into several sections, each of which is underscored by a classic film that Bannon, a self-confessed film buff, suggests has helped to form his own particular worldview.

In dealing with Bannon, Morris has changed his usual approach to his subject, whom he usually has directly addressing the camera head-on with virtually no on-screen interaction from the filmmaker himself. Here, he sits at a table across from Bannon throughout and can be seen and heard asking questions and interacting with his subject. At first, this suggests that Morris is going to utilize a more hard-hitting and direct style of interrogating his subject in deference to his obvious knowledge of how to manipulate the media to put his message across. However, anyone expecting to see Bannon have his feet put to the fire by Morris will be sorely disappointed by the director’s strange unwillingness to truly confront the subject at hand. The closest the film ever gets to this point comes when Morris admits that he voted for Clinton over Trump and Bannon seems genuinely baffled that someone who he considered to be on his wavelength would even consider doing such a thing. As a questioner, Morris ends up coming off as surprisingly weak at times and his willingness to visually present Bannon in ways that coincide with his image as a cheerful purveyor of the apocalypse (the final moments show him striding off purposefully while the Quonset hut comes up in flames) are so aggrandizing that I can imagine Bannon using screenshots as his Christmas card.

The other problem is that 90 straight minutes of Steve Bannon reveals him to be not so much a monster as a monstrous bore. In his other films, Morris has often chosen subjects with some capability for self-reflection that allows our views about them to change and evolve in intriguing ways. Here, Bannon’s crackpot take on the body politic and how only he can save it from itself (laced with no small amount of racist and fascistic rhetoric) may sound calm and reasonable on the surface, but it does not shift gears at all. The film soon becomes a monotonous blur that is only interrupted when he says something particular hideous, as when he dismisses any suggestion that his way of thinking helped lead to the tragedy in Charlottesville by claiming that the Neo-Nazis who marched there were nothing more than a creation of the mainstream media.

Besides being a bore, Bannon also reveals himself here to be an astonishingly inept and misinformed cultural critic as well in moments where he talks about the influence that films like “12 O’Clock High,” “The Searchers” and “Chimes at Midnight” have had on him by misinterpreting them in ways that would have gotten him laughed out of any film theory class—suggesting that Prince Hal’s betrayal of Falstaff in “Chimes of Midnight” was really the natural order of things and that Falstaff was perfectly okay with it. (Films aren’t his only stumbling block—he actually describes Greek tragedies as being ultimately “hopeful” at one point.)

“American Dharma” is a strangely uninvolving and wearying work—the cinematic equivalent of Trump fatigue—that it's all the more disappointing because it comes from a filmmaker who has created mesmerizing works of cinema from such subjects as pet cemeteries and naked mole rats. To add to its sense of general ineffectiveness, it comes on the heels of “The Brink,” Alison Klayman’s infinitely more pointed fly-on-the-wall look at Bannon as he attempts to spread his nationalistic way of thinking across the globe after his White House ouster that quietly and effectively reveals him to be than a blowhard whose all-important message is little more than quasi-fascist bluster with nothing at its center. That movie essentially saw Bannon digging his own grave. “American Dharma,” on the other hand, may not completely cross the line into inadvertent hagiography. But I have the awful feeling that it will be Bannon’s followers and others with his particular mindset who will wind up embracing this film the most. 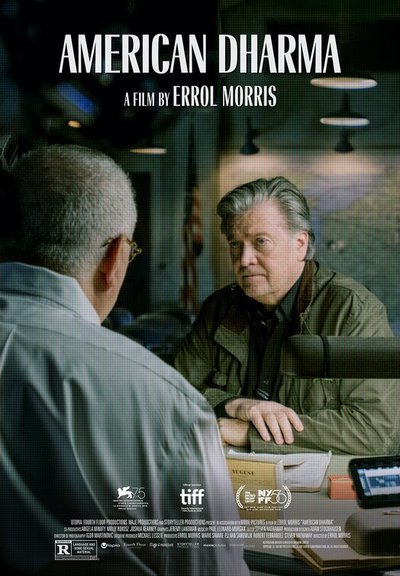