At last fall’s Venice Film Festival, a new film by director Errol Morris premiered. Titled “American Dharma,” it was another one of Morris’ portraits of an American political figure. In this case, Steven Bannon, the oddly-dressed, seemingly shambling, red-faced self-described “nationalist” who masterminded, he would be the first to tell you, President Donald Trump’s victorious 2016 campaign and left a White House post in 2017 after a tempestuous time there, during (and after) which he spilled many insider beans to author Michael J. Wolff for his best-seller, Fire and Fury.

That movie was not well-received at the festival. Many American critics complained that Morris was too soft on Bannon. His subject does not speak like a raving lunatic, and frequently throughout the movie he compliments Morris’ other work. Did Morris succumb to Bannon’s flattery? Because the esteemed documentarian portrayed him and his subject in civil conversation, I suppose the fact that Bannon ultimately comes off as completely incoherent in “American Dharma” was easy to miss. Discussing income inequality and working-class values, one minute he comes off like Karl Marx and the next like some weird protectionist variant of a Reagan-era supply sider. This factor of the film has, I think, contributed to the fact that no distributor picked it up.

This is not a review of that film, obviously, but it figures in “The Brink.” Bannon traveled to Venice for the premiere of Morris' documentary, which excited a lot of interest from international journalists. But he never made it to Venice’s Lido.

“The Brink,” directed by Alison Klayman, takes a different tack from Morris’ film and follows him around from fall 2017 until after Election Day 2018, and it does go with Bannon to Venice, where he mostly holes up in a hotel in the heart of the canal city and meets with European leaders.

The Bannon we see in the early sections of the movie is not unlike the one in Morris’ film. He looks a wreck (actually he looks a little bit less of a wreck than usual, as he’s dieting) but speaks in a pleasant voice, saying mildly provocative things but with good humor and hardly any swearing. He makes his usual protestations about how his definition of “nationalism” doesn’t include the word “white,” and how he doesn’t use “globalism” as an anti-Semitic code word, and you get the impression that maybe he even believes that a little bit. Despite getting trounced by his former boss on Twitter (“Sloppy Steve” is the Donald’s new nickname for his mad genius), Bannon goes to bat for what he calls “Trumpism” by backing Alabama senate candidate judge Roy Moore in a special election. The film doesn’t record Trump’s own vacillations with respect to a candidate who turned out to be something like a pedophile stalker, and who eventually lost to a Democrat in an outcome that was something close to inconceivable in that Southern state. Bannon takes the loss with something like resignation.

It’s when Bannon starts turning his attention to Europe, and then the 2018 midterms, that Klayman gets to record the less pleasant aspects of Bannon’s personality—those you thought were always there, maybe, but that he was able to keep hidden. Addressing Klayman at one point, he throws out a quote from Abraham Lincoln, one from which the film’s title is derived, and has the nerve to discern an analogy to his own situation as a potential political outcast therein. Even if you’re ideologically aligned with the guy you have to see the grandiosity in that. (Oh who am I kidding, of course you don’t, that’s already been proven.)

Bannon tries to sell himself to Nigel Farage (imagine being that hard up), envisions a network of right-wing European politicians working together, curses a lot, allows that he “loves’ fucking with” Hillary Clinton (does anyone think she cares anymore?) and berates the editor of Breitbart London. One of the funniest bits is at a dinner with various continental sophistos, at which that editor, Raheem Kassam asks, before the meal is served, if anyone would like to say grace. Everyone at the table, including Bannon, looks at him as if he’s grown a third eye. Then the camera finds Arizona congressman Paul Gosar, who snaps to attention and starts droning a prayer. The “let’s throw a sop to the rube” feeling of the scene is quite remarkable.

Then it’s off to the midterms. Bannon is joined by toxic avenger Sam Nunberg, who brags to the camera that he invented the idea of “the wall.” Way to go, Sam. But on election night this genius is just another Bannon flunky. “Do your job, Sam,” he screeches. But the House is lost anyway. Klayman’s accomplished, absorbing film does not pretend not to be pleased by this.

Where does this leave Bannon? At the movie’s end he’s back In Rome. Whether he becomes a force again or just devolves into a fringe figure with an expensive European hobby remains to be seen. It doesn’t look great for him from here. 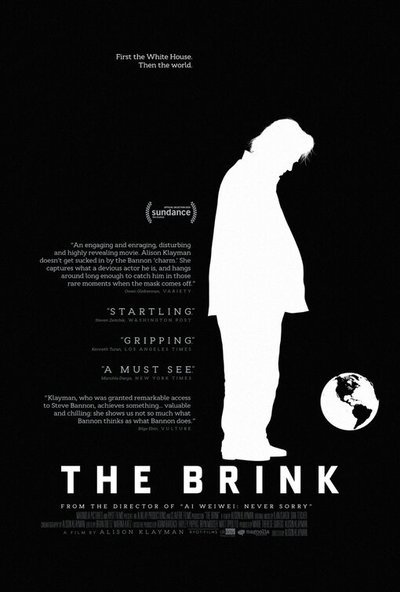