The raucous and profane “America: The Motion Picture” will likely draw comparisons to the skewering of faux patriotism in the hysterical “Team America: World Police,” but it actually reminded me more of the comedies of Zucker-Abrahams-Zucker, the team behind classic slapstick comedies like “Airplane!” and “The Naked Gun.” Like those beloved laugh generators, it’s a non-stop barrage of jokes built from the model of “if a joke doesn’t work, wait five seconds and maybe the next one will.” It will likely appeal to fans of all of the above, as well as the work of director Matt Thompson, making his feature debut after years of great animated television on shows like “Sealab 2021,” “Frisky Dingo,” and “Archer.” It's an assault of R-rated humor that turns grade school history lessons into an action blockbuster. It feels like the product that would result from a bunch of eighth graders challenging each other to make history homework more exciting. You know what would make all this history more exciting? Machine guns and Robocop.

“America: The Motion Picture” opens with the death of Abraham Lincoln (voiced by Will Forte), not at the hands of John Wilkes Booth but Benedict Arnold (Andy Samberg), who just happens to be a werewolf. (You probably already know if this is the kind of movie you want to see just from that sentence.) A witness to the violent beheading of the man who freed the slaves, George Washington (a perfect Channing Tatum, so welcome back in the world of comedy) vows to avenge the death of his Presidential BFF. To fight back against Arnold and the villainous King James (Simon Pegg, who gets my favorite line in the movie that I won't spoil here), Washington assembles his own team of historic Avengers that includes a rambunctious Sam Adams (a wonderful Jason Mantzoukas), a razor-sharp Thomas Edison (Olivia Munn), an awkward Paul Revere (Bobby Moynihan), a heroic Geronimo (Raoul Trujillo), and even a blacksmith voiced by the one and only Killer Mike (Run the Jewels can also be found effectively on the soundtrack). “Archer” vet Judy Greer voices Martha Washington, who knows she’s pregnant with George’s child seconds after they have sex. He's that much of an American hero.

Just as “Archer” uses an espionage structure to skewer societal norms and macho stupidity, “America: The Motion Picture” turns American history that everyone knows into a ridiculous action blockbuster with Thompson and writer Dave Callaham taking aim at the superficial constructs of faux patriotism and even the failed potential of this country. Producers Phil Lord and Christopher Miller bring that non-stop energy of their other projects like “Spider-Man: Into the Spider-Verse” and “The Mitchells vs. the Machines” even if the writing sometimes feels bizarrely dated. Jokes about Blue Man Group, "The Transporter," Kinkos, and Lynyrd Skynyrd give the entire project the feel of something that was scribbled in a notebook many years ago, and a rewrite to tighten those misfires could have really elevated the overall project. There’s also a sense at times that “America” is going for loud instead of funny. It's often both but so aggressive at times that I wouldn't really blame anyone who can't make it through (and I wonder if it wouldn't have worked better in a series form—as much as I love "Archer," I think it too would grow tiring after 98 minutes.)

However, funny wins out over loud often enough. Mantzoukas, in particular, is just hysterical, a great comedic actor who infuses Sam Adams with just the right amount of macho inanity. Most of all, everyone here seems to really get what Thompson is going for, embracing the dumb side of America while playing some of its most historic figures. What’s more American than an action movie that includes beer and baseball in its biggest action sequence? One that also has a Robocop centaur, that’s what. 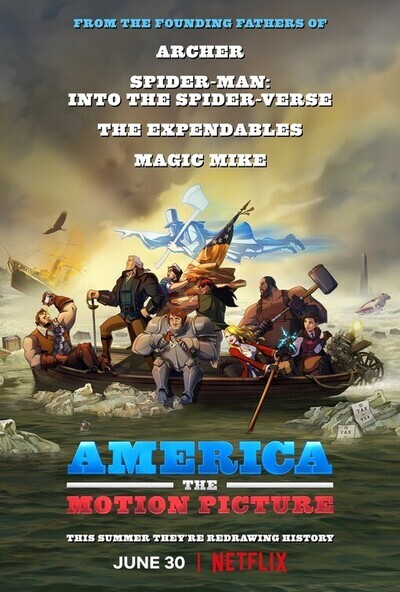 Will Forte as Abraham Lincoln (voice)