You might not enjoy the Korean sci-fi genre hybrid “Alienoid” if you’re focused on its ungainly and potentially confusing plot, which involves time traveling robots, aliens, and Taoist wizards. They chase after each other and a magical whatsit called the Divine Blade. Thankfully, the plot isn’t really the thing in “Alienoid,” a sugar rush of an action fantasy that ultimately dead-ends with a cliffhanger ending and some canned revelations about who’s who. Before then, “Alienoid” flies so fast from one twist to the next that it’s pretty easy to follow along its many tentatively related protagonists, including bounty-hunting shamans, shape-shifting cat people, and a mysterious young woman with a gun.

The sheer too-much-ness of “Alienoid” could have easily been wearying, given its many tangents and supporting characters. Thankfully, writer/director Choi Dong-hoon confirms his hitmaker reputation by balancing over-inflated set pieces with disarming screwball comedy and delightful character actor performances. And while bright costumes, shifting timelines, and pumped-up special effects may seem to be the most important parts of “Alienoid,” you’re really there to watch Choi (“Assasination,” “Woochi: The Demon Slayer”) keep as many plates airborne as he can.

One of the main charms of “Alienoid” is how hard Choi works to introduce familiar (ie: American) science-fiction tropes to an ostentatiously Korean narrative. This at least partly explains why there's a 14th century period adventure at the heart of a time-hopping “The Terminator”-style chase, featuring callous space aliens who stuff the souls of their prisoners into unwitting human bodies. (Choi also provides some helpful context here in James Marsh’s South China Morning Post interview)

Time, space, and logic are meaningless to these aliens, whose species, individual names, and general qualities remain largely undefined. All you need to know is that, in the year 2022, the smoldering and stoic alien Guard (Kim Woo-bin) and his flying robot companion Thunder (voiced by Kim Dae-myung) must stop an evil alien called the Collector before he can free his fellow alien prisoners from their human bodies. Guard and Thunder are joined by their plucky human ward Ean (Choi Yu-ri), who occasionally forces her two surrogate dads to explain themselves and their drama’s stakes.

Meanwhile, in the year 1391: Muruk (Ryu Jun-yeol), a hapless bounty-hunting dosa magician, searches for the Divine Blade, which is naturally of extraterrestrial origins. Muruk travels the countryside with a pair of mystical cat-people (Shin Jung-geun and Lee Si-hoon) who live in his enchanted fan. They’re joined by a number of competing seekers, particularly the evil masked shaman Jajang (Kim Eui-sung) and his implacable alien accomplice (Ji Gun-woo), as well as the above-mentioned lady with a gun (Kim Tae-ri) and a hapless buddy magician duo of Madam Black and Mr. Blue (Yum Jung-ah and Jo Woo-jin). Individually, these characters don’t matter, but together, as a migraine-inducing conspiracy, they’re pretty irresistible.

Choi skillfully keeps viewers’ attention focused on his characters’ and their defining quirks. Muruk and Guard are both stubborn control freaks, so their stories are indirectly bound together by a mutual need to either realize their potential or accept help from other, lesser people, like Ean or that indomitable gunwoman. There are a lot of painstaking references and/or influences from American science-fiction, including Isaac Asimov’s robot stories and DC Comics’ Booster Gold comics (Skeets’ fans will love Thunder), but none of them are as compelling as Choi’s messy protagonists, who sometimes literally vault over each other in order to get to the next plot point.

To be fair, more than a few key scenes are either too goofy or conceptually overburdened. But did I mention the shape-shifting cat-people? So much of “Alienoid” operates on that kind of sensory-overloading illogic, the kind that’s blessedly grounded by action choreography, rhythmic pacing, and, best of all, human gestures and performances. Some cast members exhibit more range than others, but Choi generally plays to his actors’ strengths, to the point where even minor characters seem capable of stealing whatever scene they’re in. I was especially won over by Madam Black and Mr. Blue’s sweaty magic act, which has less to do with skillful teamwork and is more about improbable poise and constant movement. Even Kim Woo-bin does more with pursed lips and starch-stiff posture than most leading men get to do in an entire MCU phase.

“Alienoid” is an elaborate (and expensive) magic trick and its main appeal is how hard it hustles you into keeping up with its creators’ energetic flailing. This is the kind of would-be blockbuster that was clearly designed to appeal to as many different kinds of viewers as possible, so of course there’s too much of everything. But the amazing thing is, as dorky and overstuffed as the plot tends to be—“Alienoid” is also often fast enough to keep pressing forward. What a rush; what a headache. 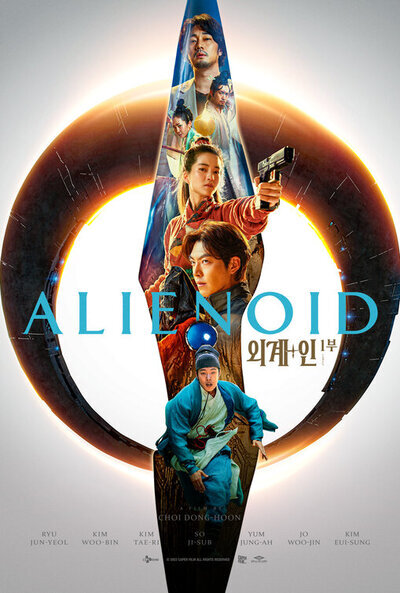 Kim Tae-Ri as Lee An

So Ji-sub as Moon Do-seok