Based on the best-selling novel by Zane, "Addicted," directed by Bille Woodruff, offers steamy sex, domestic melodrama, 12-step piety and deep shame, sometimes all in the same scene. "Addicted" is the story of a woman who has it all: happy marriage, two kids and an exciting career, and yet throws it all away because of her addiction to sex. The sex she has outside her marriage is thrilling and forbidden, but she has plenty of sex with her husband too. "Addicted" is supposed to be erotica, so perhaps thinking about it too much is unfair, but the film is so uneven (it's both hot and preachy), as well as way too long, that thinking becomes inevitable. The situation is not helped by a bloated, confused script that doesn't seem to know what it wants to be. Zoe has a lot of hot sex. She is punished for it. She realizes she is "sick." Cue strings.

Zoe is an artists' rep who has her own company, and she is obsessed with signing a mysterious artist named Quinton Canosa (William Levy). When asked why she loves his work, this woman who supposedly has a background in art, says: "His stuff just grabs me in the gut, you know?" The two meet cute at a gallery, and he smolders at her meaningfully, bedroom-eyeing her instantly, and she blushes and acts flustered and yet available. Before you know it, they are having sex in his fabulous private studio, as well as in an empty warehouse where he shows her a mural he has been working on for years ("I've never shown this to anyone," he tells her with tears of vulnerability in his eyes.) Zoe starts sneaking around on her husband, and things with Quinton quickly become too complicated for her to handle. Not only is he always in some state of nudity, tempting her with his rock-hard abs, he is also tender and damaged.

The screenplay, by Ernie Barbarash and Christine Welsh, is both totally on-the-nose and totally a mess. Zoe races into the arms of her various lovers, neglecting her husband (Boris Kodjoe) and kids, giving herself over to the newness of her conquests, and it's all presented in as sexualized and erotic a way as possible. The sex is graphic, but in a "Red Shoe Diaries" kind of way. But "Addicted" also wants to shame and contain Zoe through the introduction of 12-step language and a back story that "explains" her behavior. It all feels stiff and imposed, as though suddenly "Addicted" remembered it wanted to be a Lifetime Movie of the Week that has a lesson for us all, instead of erotica that knows it wants to turn you on and has no shame about that.

The performers are pretty game considering the ridiculous material. The characters aren't recognizable human beings, they are overwrought emotional states walking through immaculate settings wearing fabulous clothing (ready to be torn off at a moment's notice). Emayatzy Corinealdi plays Zoe's assistant, a straight-talking go-getter, frustrated with her distracted boss, and she brings a practical energy to the hothouse mood of the film that is welcome and often funny. She feels like a real person.

Woodruff steers the ship smoothly, for the most part. The problem lies in the conflicted attitudes the film has towards its own subject material. 1994's "When a Man Loves a Woman," a clear influence on "Addicted," showed a marriage nearly done in by alcoholism, and was a serious look at addiction, acknowledging the tough truth that not only the "sick" one needed to change. The entire dance step of the relationship had to shift if the marriage was going to last. "Addicted" is unwilling to confront that complexity. The film lingers so lovingly over Zoe's many sexual exploits that one almost feels disappointed when it becomes clear that the film is about to turn into a lecture. Erotica is best when it doesn't take itself too seriously. 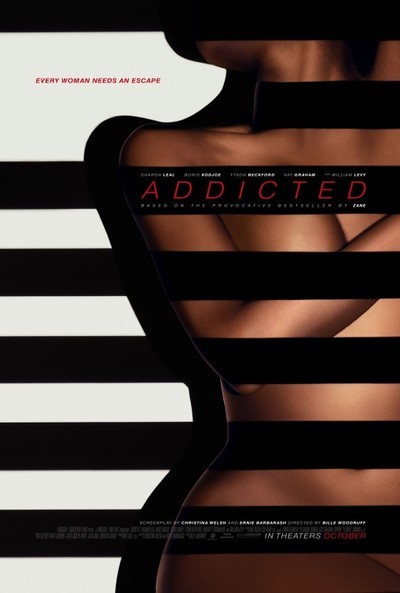