The bad news is that “Acts of Violence” is a gross, creepy and generally tacky piece of claptrap that plays like an unholy blend of ‘The Boondock Saints,” a sweeps week report from a less-than-reputable news station more interested in prurience than edification and one of those lousy bits of Cannon fodder that Charles Bronson churned out during the waning days of his career. The good news, on the other hand, is that with the advent of VOD, audiences can go about completely ignoring it from the comfort of their own homes rather than having to venture out to the local multiplex in order to snub it. The film may be completely worthless from an artistic standpoint but it certainly can’t be beat from a convenience standpoint.

Set on the mean streets of Cleveland, the story begins as Roman McGregor (Ashton Holmes) is about to marry childhood sweetheart Mia (Melissa Bolona). Alas, disaster strikes when, at her bachelorette party, Mia gets into a fight with a couple of sleazes (Sean Brosnan and Rotimi), who are the chief goons for local crime lord Max Livingston (Mike Epps) and they retaliate by kidnapping her to serve as a part of their boss’s foray into human trafficking. On the bright side, Roman’s two older brothers, Deklan (Cole Hauser) and Brandon (Shawn Ashmore), are both military veterans who apparently returned from the front with a lot of leftover hardware (and plenty of issues with unchecked rage in the case of Deklan) and the three of them, convinced that the police are powerless to do anything, band together to track Mia down and kill every bad guy they come across. Although sympathetic to their cause (having already dropped another trafficker off a building during the opening action sequence), Detective James Avery (Bruce Willis) doggedly tries to counsel them against vigilantism while building a proper case against against Max, but soon finds his attitude changing when his noble efforts prove to be for naught.

As someone who has never shied away from the trashier meats to be found in the cinematic stew, I don’t mind “Acts of Violence” being nothing more than an overt example of exploitation filmmaking—I object to it being a cut-rate one. The basic story is so pathetically thin and simplistic that even action junkies with low standards—pretty much this film’s target audience—will find themselves thinking that maybe writer Nicolas Aaron Mezzanatto and director Brett Donowho could have made a little more of an effort in terms of pacing. As for the characters, they are so utterly unremarkable that the simple act of remembering their names as the film goes along will prove to be too much for most people, and the performances show a similar level of utter indifference.

However, what pushes “Acts of Violence” from the merely stupid to the decidedly unsavory is the way in which it drags in serious issues to serve as window dressing for the garbage at hand. Near the beginning of the film, for example, we see Deklan blowing up at an ineffectual VA stooge for being incapable of offering any help for his emotional problems and rage issues other than more medication. This is an issue of real concern to many people but as it turns out, the film has no use for it other than to serve as a clumsy explanation for Deklan’s abilities as a one-man killing machine. (Even more distastefully, once all the ensuing slaughter has concluded, we get a final shot of him clearly feeling a lot better, suggesting that bloodshed is the only real cure for PTSD.) Human trafficking is another important and troubling issue, but the film uses it as little more than a gimmick to justify the violence rather than to really examine it at any length. Furthermore, it is a little difficult to take seriously a story dealing with the horrors of the exploitation of women that itself takes the time for a long strip club sequence featuring an extended three-woman lap dance.

At the beginning of this review, I compared “Acts of Violence” to the garbage on which Charles Bronson frittered away the latter part of his career—things like “The Evil That Men Do,” “Murphy’s Law” and the lesser “Death Wish” sequels. In hindsight, perhaps that comparison isn’t fair because as bad as those movies were, Bronson at least put in some effort, which is more than one can say for Bruce Willis here. Yes, this is another one of those anonymous action movies that he has been specializing in as of late—the kind that turn up in a couple of theaters and on VOD with virtually no advance word and featuring listless performances by him that, based on the available evidence, were apparently shot in no more than four or five days, most of them utilizing the same office set. Why he would want to squander his still-considerable talent and screen presence on something as low-rent as this is beyond me—as it could not have been for the money, my only guess is that he wanted to squeeze in a few quick rounds before doing the “Death Wish” remake. At one point, in what proves to be the only remotely realistic moment on display, his character remarks “I’m tired of this”—by the time “Acts of Violence” reaches its conclusion, any still left watching it will doubtlessly feel the same way. 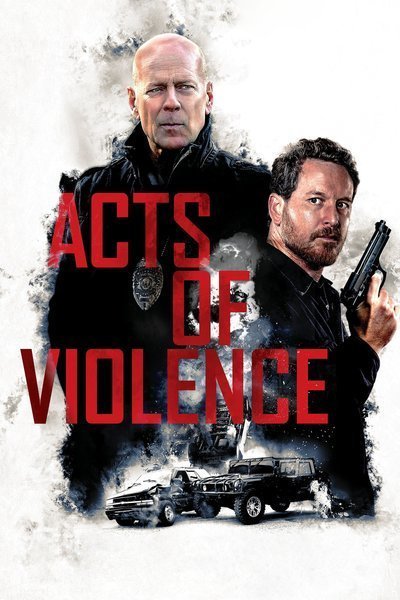 Rated R for violence, language throughout, sexuality/nudity and drug material.