While critics are ordained to go into every film by leaving as many preconceptions as possible at the door, I have to admit to something regarding “About Alex,” the new dramedy starring a number of talented TV stars, including Aubrey Plaza (“Parks and Recreation”), Max Greenfield (“New Girl”), Jane Levy (“Suburgatory”) and Jason Ritter (“Parenthood”): I’m exhausted by quarter-life crisis variations on “The Big Chill.” They pop up about every other month—films in which a group of friends are reunited by a key event (often a death or suicide) and pull their skeletons screaming from the closet, usually over a few joints and while they dance around a cabin. The subgenre has exhausted almost all of whatever creative energy it once had, and too often features talented people forced to go through overly scripted moments. And so I was pleasantly surprised by much of “About Alex,” a film that features a stronger-than-average ensemble for this subgenre even if it too often succumbs to predictable, traditional turns of Screenwriting 101. When the more talented members of the cast are allowed to let their characters breathe and exist outside of their clichés, “About Alex” has the kind of energy that reminds one, even this cynical critic, why writers and directors keep returning to this oft-told tale.

Alex (Jason Ritter) has tried to kill himself, although it’s clear that it was more of a cry for help than an actual attempt on his life. A montage of his friends getting “the call” that Alex tried to shuffle off this mortal coil introduces us to his former college buddies who have now been divided by geography and the simple progression of life. Alex’s former BFFs come to his side for a weekend to get him over the emotional hump, answer some open questions within their circle of friends, and experience the emotional upheaval that often comes with revelations like the fact that someone you love has tried to kill himself.

Alex’s closest friend is Ben (Nate Parker), a writer who has been dealing with intense block as he tries to figure out what to do next. Ben is shattered by the suicide attempt because he ignored Alex’s phone calls in the days leading up to it and so naturally blames himself. He wasn’t there when a friend reached out his hand. Ben is partners with Siri (Maggie Grace), another of Alex’s friends who happens to be late (not as in “for dinner” but as in “with child”). How will Ben take it when he learns Siri is pregnant?

Josh (Max Greenfield) is the abrasive member of the group, the one who wants to confront Alex with a WTF style of grief management to get to the bottom of why he tried to kill himself. More concerned than confrontational is Sarah (Aubrey Plaza), who hooks up with Josh every now and then, but has a crush on Isaac (Max Minghella), the most Yuppie of the gang. He may have even voted for Bush (gasp). Complicating matters, Isaac brings his relatively new girlfriend Kate (Jane Levy) for the reunion/intervention. You can imagine how well that goes.

Sort of. What’s kind of refreshing about “About Alex” is that the predictable map through the clichés of this subgenre that seems to be charted in the opening scenes isn’t quite followed. It’s crystal clear which secrets will be revealed, but how they are brought to the surface and how they are handled is often done with more of an emphasis on character than cliché. Levy’s Kate isn’t merely the “other woman,” thanks in large part to yet another likable performance by the star of “Evil Dead,” someone who I find more interesting with each role. Jason Ritter finds the kind emotional undercurrent that’s often missing from these troubled characters. There’s something honest in the way his voice quivers that makes his depression seem more genuine. There are a couple of performances that are less effective than others (the young Jesse Zwick writes more honestly for the men—Max Minghella, Nate Parker—than for their female counterparts—both Maggie Grace and Aubrey Plaza feel underwritten), but when Zwick allows his characters to breathe, “About Alex” feels true. The set-up and climax may be overwritten, but what’s in the middle has a purity of character often missing from the genre. I wish Zwick trusted his cast a bit more to give them fewer contrivances and more scenes of friendly interaction, but there’s enough here to make one anticipate what he does next. And maybe even to make me dread the next 20-something "Big Chill" a little less. 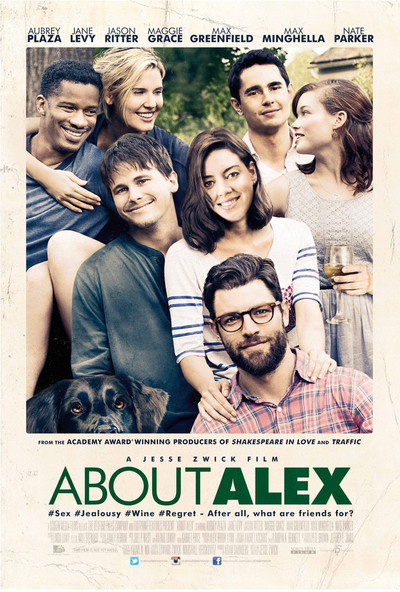 Rated R for language and drug use