A Walk Among the Tombstones

Fans of the hardboiled detective, rejoice. Screenwriter-director Scott Frank and actor Liam Neeson, adapting the splendid work of crime novelist Lawrence Block, have brought a great one to the screen in high, bracing style. “A Walk Among The Tombstones” not only does justice to one of Block’s most soulful creations, ex-cop and recovering alcoholic turned very unlicensed private dick (“I do favors for people, and they give me gifts,” is how he puts it) Matthew Scudder, it stages, single-handed, a bracing revival of a kind of genre movie that many of us have been mourning. That is, a crime drama that isn’t all bang-bang and chop-chop. Not that such movies don’t offer their pleasures. Hell, Liam Neeson himself has been a welcome feature in many of them. But fans of the likes of “Jackie Brown” and “Out of Sight,” not to mention older, more classical fare such as “The Maltese Falcon,” “Murder, My Sweet,” etc., have been feeling pretty starved in the contemporary movie climate. “A Walk Among The Tombstones” provides us a very substantial meal.

The movie begins in 1991, depicting a very bad day for still-on-the-force Scudder, in a scene of brutal intensity and surprise. It’s not the first such scene. After moving to 1999, and a New York City rather amusingly in the grip of Y2K panic, and a sober and dour Scudder getting reluctantly drawn into a peculiar kidnap-and-murder case, director Frank keeps the tension at a steady, insistent simmer even as he’s carefully building his characters. When things come to a boil, Frank doesn’t kid around. The story revolves around a couple of sickos who’ve been making sport of kidnapping and ransoming the wives of various drug dealers and traffickers in the city. Because their prey are related to criminals, bringing the police in is a vexed option for the victims; and because the bad guys are sickos, once they get their loot they don’t return the victim. It’s an even more twisted operation than what I’m describing, and Frank depicts just enough of the details to get the viewer’s stomach churning, and also to understand the anger and indignation building up in the ever-stoic Scudder, whose personal hell can only be kept at bay by not succumbing to those emotions. As the kidnappers up the ante and make their latest victim a 13-year-old daughter of a drug kingpin…well, the whole thing is likely to cause dropped jaws and possibly detached movie theater armrests.

This isn’t the first time Scudder’s been portrayed on screen: that was in the sadly misbegotten 1986 Oliver Stone/Hal Ashby collaboration “Eight Million Ways To Die.” “Tombstones” reboots the character and gets him right. Not just physically. Neeson captures Scudder’s toughness, intelligence, world-weariness, but also his humanity and humor. Doing research for the case, Scudder encounters an African-American homeless teen named T.J. (nicely played by Brian “Astro” Bradley), with whom he strikes up an unlikely but ultimately affecting friendship, making the kid a sidekick of sorts; the movie depicts their affinity in a way that’s utterly unpatronizing and convincing. Frank also takes real risks in the movie’s climactic showdown scene; instead of staging a straightforward action set piece, he staggers the events and intercuts them with a defining scene in Scudder’s development as a person. The movie ponders how Scudder’s spirituality will hold up under exposure to a particularly monumental example of evil. Movies such as “Taken,” as diverting as they can be, don’t ask the viewer to be concerned for the soul of the protagonist. “A Walk Among The Tombstones” does, and so besides being a dynamite thriller, it gives something not insubstantial as an extra. 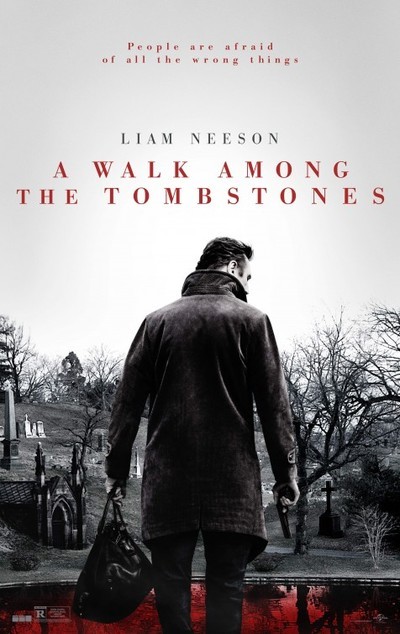