"A Teacher" will leave you feeling drained, even exhausted. That's about right for a movie about obsession, one with no resolution except waiting for the other thud to drop.

We begin after the beginning, watching an attractive high school teacher relating easily to her class. Then suddenly Diana (Lindsay Burdge), this English and writing instructor (why is it always English?) is having sex in a car, a cut so abrupt it seems more like a catapult than a jump cut. For an instant you think maybe there's something wrong with the print of the film. Perhaps first-time director Hannah Fidell decided the central idea is such a universal fantasy she didn't need backstory, or even character motivation. Soon enough we learn Diana is having a fling with one of her students, the cute but not irresistible Eric (Will Brittain).

The setting is a suburb of Austin Texas, but the classroom, and the school, could be anywhere. It's so familiar, you can practically smell the chalk, want to start throwing erasers. Even the instructor lunchroom hasn't changed. But Diana is definitely upgraded in the looks department. As a character observes later in the movie: "She's the teacher in high school the dudes wanted to bang but didn't."

Yet she is not that typical. Scenes of an unhappy-looking Diana as a compulsive runner dot the film, and some ominous music sets the tone. She's sort of a loner, though with a roommate, the cheery Sophia (Jennifer Prediger) in whom she never confides. A brief visit from her out-of-town brother reveals she's cut off from her family. But despite a reference to their mom's Alzheimer's, the cinematic catch-all disease for family problems these days, no disrespect intended, that's all we get. It seems the director had to throw in something, anything, to explain Diana's reclusiveness.

She definitely is no predator, despite the film's emotional set-up, but a woman in love-lust. And her love-object is no victim. Eric is a cool cat; and Diana gets kittenish, even emotive around him. Still, he's no callow cad, he's merely self-possessed. At one point Diana suggests they take a time out, and he accepts this with ease. He's not in it for any kind of long haul, though he cares enough to never blow her cover, or put her job in jeopardy. When Diana snaps at a fellow teacher who interrupts a conversation between the two of them, Eric has the objectivity to see this is inappropriate, and might be dangerous for her. By then though, she's already a goner, and is in danger.

Much of the movie takes place in dark interiors. The love-making scenes are steamy, seemingly passionate; risqué not pornographic. Happily, a little something is left to the imagination. Though after awhile you're itchy to get out of the bedroom, or the old high school staple, the car. The "one-room" claustrophobia is reminiscent of being trapped in the love-nest of "Last Tango in Paris." An opened out sequence is a great relief, as Diana and Eric take to the highway, driving to his family's ranch for some away time. It also makes for a tantalizing bit about Diana, who says she has never been to a ranch before, odd for a Texas resident. Perhaps hers has been a nose-to-the-grindstone existence. But the movie only allows for conjectures.

Texas in the spring has a special kind of beauty, caught here by talented cinematographer Andrew Droz Palermo. We also get a much needed plot jolt as a ranch caretaker turns up unexpectedly, scaring Diana into backing off for a bit. But abstinence only makes her heart grow fonder. It's a short segue to some reckless, even borderline behavior as cell phones, internet stalking, and other forms of self-torture. Spying on the love object, hoping against hope for an impossible future, Burdge convinces as the obsessional stew goes sour.

To her great credit, director Fidell—named by Filmmaker Magazine as one of the 25 new faces of independent film—takes on a tricky topic. She even gets us to empathize with the person in the power spot. Too, the film is called "A Teacher," not "The Teacher." It's about this particular person, not necessarily all teachers. The victimization of underage students is public knowledge, through reported arrests and even made-for-TV movies, such as the story of Mary Kay Letourneau, the woman who left her husband for the 12-year-old student she seduced (for which she went to jail). We usually assume it's the teacher who is calling the shots.

Not here, as Diana, caught in a vortex of her own making, spins out of control. The movie does let us know she knows better. At odds with herself, she's intelligent enough to realize she should be more self-protective, even asking at one point for the return of a seductive "selfie"—posed at Eric's request. Yet common sense goes one way, obsession another.

"A Teacher" is a one-note exercise. You never get Eric's point of view. And the power shifts in the relationship are not explored with any subtlety. Student-teacher interaction has the built-in dynamic of inequity, possible role reversals: the stuff of drama. (If you can find the film, there's a clever treatment of such shenanigans in "Donoma" by Haitian filmmaker Djinn Carrénard. A young woman teacher risks it all by engaging with a student, he blabs to the class, who then start to mock her. She manages to turn the tables on the kid, and regains control of her classroom.)

Overall, "A Teacher" doesn't ask why Diana gives up her emotional edge so very early on. Is it because she is a woman? Or because she is so vulnerable? We never know.

None of this is to condone, or explain, such behavior, which is of course both wrong and against the law. Besides, look what happens to Diana. 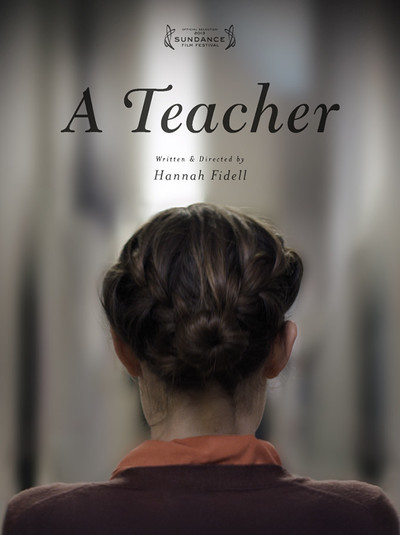 Will Brittain as Eric Tull