I still cannot believe that John Krasinski got moviegoers to be silent back in 2018. His box-office smash “A Quiet Place” (co-written with Scott Beck and Bryan Woods) went beyond caring about characters trying to survive in quiet—it taught uneasy audiences to follow suit, filling theaters with silent observers. No moviegoer would want Krasinski to repeat this terror exactly for a sequel, but the changes he’s made in this follow-up then feel especially brash: it’s bigger, faster, louder, and more typical for the horror blockbuster genre. “Part II” has got approximately triple the amount of dialogue as the original, and its horror is far more literal and straightforward. If you were more scared of the sound-hating, generic looking crab/spider monsters with the Venom-like heads from the first movie than you were the visceral challenge of complete silence, “A Quiet Place Part II” is especially for you.

In writing and directing this sequel, Krasinski proves his intelligence and his non-subversive priorities when it comes to being a genre director. He also asserts his talent at orchestrating tense life-or-death scenes with an exciting sense of when to go slow and when to floor it. In its best moments, “A Quiet Place Part II” reminded me of Steven Spielberg cutting loose with “The Lost World: Jurassic Park,” letting his beasts rampage through a new environment in a staggering way. Even if this sequel remains firmly in the shadows of the original, I wanted part three as soon as it was over.

The first movie ended essentially at its climax, with our heroes, the Abbotts, finally tipping the scales after 400-some days of terror under their noise-slaying captors. “Part II” begins with a deliciously cruel reset, going back to day one of all this, when no one knew anything. We as audience members know what comes eventually (Krasinski’s plotting treats the first movie as required viewing), and that makes a scene at a Little League baseball game—an open field of noise—an especially nerve-rattling, jack-in-the-box sequence in a movie that has plenty of them. The match is called off when something especially big blows up in the sky; everyone shuffles home. Many citizens don’t stand a chance after the aliens suddenly slam into town, sending Lee Abbott (Krasinski) into hiding with his daughter Regan (Millicent Simmonds), while mother Evelyn (Emily Blunt) frantically drives with her two sons. This is like a high-octane victory lap for what Krasinski accomplished in the first movie especially as its bracing violence reacclimatizes us to fearing sound, while locking us into different characters’ points-of-view with long takes as they try to navigate pure chaos. “A Quiet Place Part II” announces here that it’s playing a different and considerably less interesting game, but it’s a bravura sequence.

“Part II” then jumps right to the end of the last one, moments after Evelyn victoriously cocked a shotgun. With their family's barn burning, and patriarch Lee dead in the fields, it’s time to leave home. Carrying her newborn baby, Evelyn travels with her daughter Regan and son Marcus (Noah Jupe) off the sand path that had previously been laid by Lee, past the gravesite of their young son from the beginning of the first movie. Regan has her cochlear implant in hand, looking to further weaponize it after its feedback proved at the end of the first movie to give the monsters debilitating headaches (or something like that). Her search for more people sets them on a course for a signal, and the unknown of humanity.

With part one focusing on sacrifice for family, this sequel now concerns what one would give up to help others. Cillian Murphy plays the bleary Emmett, the newest addition to the series, a family friend from the ball game who ponders this question when he refuses to help the Abbotts after they step into the abandoned factory he lords over. He is incredibly resistant at first, especially given his own loss and waning food supply. And he warns Evelyn of looking for others, talking about how there are now “people who aren’t worth saving.” Emmett has an intriguing bitterness, until the film’s overall emotional growth is reduced to Emmett learning to follow the gospel of all-American hero Lee, which is not the only cheesy idea that Krasinski takes too seriously. And yet within the movie’s fear of other humans, it does ramp up a good bit of fear later on with people who are less giving than the Abbotts: it’s scary when a group of people are staring at you, and not saying a word.

As his characters venture into new territory, it’s solid craftsman Krasinski who is noticeably not taking many risks. He leads with intention, and he’s confident with multiple threads at once, and in putting every cast member (including the baby!) in uncomfortable danger. And yet any time he’ll do something really radical—like bring Regan to the forefront, alone with shotgun in hand—he eventually shirks from it for a development that’s noticeably easier. Or in some cases, he’ll rely on an easy scare with a dead body popping into frame, piling on the movie's numerous loud noises for scares. The series’ original appeal of minimal, hushed dialogue is toyed with too, as “Part II” bends some of the rules eagerly enforced all for the sake of quiet-ish conversations that streamline emotions in a way that’s far less eloquent than the sign language in the original.

The performances remain sound, and intense, even if the story gives little space for them. Blunt is in more of a straightforward action mode, having already proven how bad-ass she was in the first movie, still embodying a great deal of physical stress and the maternal urge to protect. Jupe and Simmonds are true professionals when it comes to crying, screaming terror, and they both bring out a tenderness to this story of discovery with glimmers of hope. And Krasinski remains good at casting interesting faces for their intensity—Murphy’s face can show a certain weariness in different lights, and here he looks beat, mysterious, but human. Djimon Hounsou and Scoot McNairy also lend their unique presences to this movie, but that’s all that can really be said.

The only entity that moves faster than Michael P. Shawver’s editing are the monsters themselves. But there’s no love for them from the story—they’re like an actor in an ensemble who has to be there contractually, even though no one would invite them to the wrap party. Aside from falling from the sky, they're not further developed by Krasinski, and the amount of focus this story gives to them shines a light on how weakly conceived they are (however impeccably rendered by ILM). Krasinski’s interest in going against explainer fan culture—good luck with this one, YouTube—is intriguing, but the lack of background feels like he just has too little to say about his monsters. They become plainly dull villains here, aggressively silencing human beings with a slash or a toss, and, ho hum, that’s it. Two movies in, and their mystery is starting to hint that there’s no there there.

What’s surprising about the whole “A Quiet Place” emotional experience largely fades here, especially as all of this unfolds with a numbing amount of max-volume slams, bangs, and bass warbles; Marco Beltrami's score brings in the original's meditative themes when it's not trying to blow you to the back of the theater. But the moments in which humans and monsters clash are incredibly robust and kinetic, and succeed at getting you to think of nothing else in the story but the terror on screen. Along with cinematographer Polly Morgan and editor Shawver, Krasinski proves highly adept at building and layering in-your-face sequences, especially as three different storylines climax with beloved characters screaming for their lives. One of Krasinski's best visual touches involves two scenes that trap the viewer into a point-of-view of being in a fast car, like at the beginning when Evelyn is trying to speed-reverse from a hijacked bus. These thrilling sequences give the film plenty of adrenaline at its beginning and end, and play like a nod from a still-evolving Krasinski: he’s embracing “enjoy your ride” filmmaking, even if that can encourage a viewer’s passivity. Here’s hoping that “Part III” leaves more room for what got people talking in the first place.

Available only in theaters May 28. 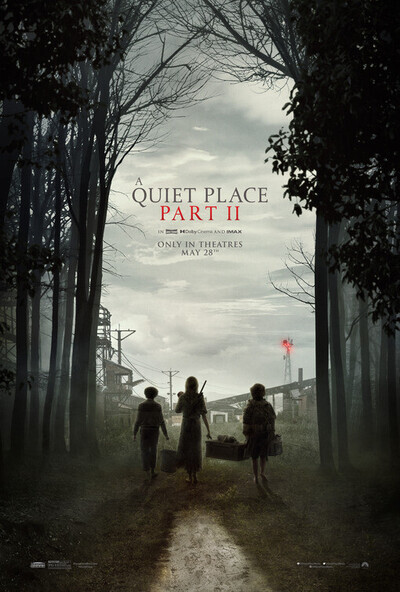