For once, London’s Sunday Times war correspondent Marie Colvin (Rosamund Pike) is answering questions, not asking them. In the interview that brackets “A Private War,” the journalist who interviewed rebel leaders and despotic rulers is asked what she would want some future journalist to know about her and her work. She answers, “I cared enough to go to these places and write in a way to make someone else care about it.” Documentary director Matthew Heineman (“Cartel Land,” “City of Ghosts”) made his first narrative film the story of a journalist and documentarian covering the most brutal and terrifying places on earth for readers who would glance at her stories as they had their morning marmalade and toast.

Colvin, known for her dashingly piratical eye patch and fearless reporting from war zones in Syria, East Timor, Libya, Kosovo, Chechnya, Iran, Iraq, and Sri Lanka, was an American from Long Island who was intensely traumatized by what she saw but somehow, even after the loss of an eye in Sri Lanka and severe PTSD that led to hospitalization, could not stay away. Hours after her last report from Syria on CNN, proving that Bashar Assad was bombing innocent civilians, not, as he claimed, terrorist gangs, Colvin was killed there.

She had no patience for American soldiers with clipboards explaining the rules for being embedded to get military support and protection. Instead of the relative safety of an embed, Colvin kept going back to the most dangerous places because she needed to tell the story, or, rather stories. She wanted the world to know how ordinary people were affected by the decisions made by people in power, not just the sanitized details of troop movements and diplomatic maneuvers. As The Telegraph wrote in her obituary, her specialty was “illustrating a fearsomely complex conflict by finding the most dramatic, personal story at its heart.”

The dramatic, personal story of Colvin herself is absorbingly told here, largely because of Pike’s dynamic performance, showing us a woman who was courageous enough to risk her life for a story on a daily basis but remained vulnerable enough to make the stories viscerally compelling. That combination took a terrible toll. She used sex and booze to numb her feelings but they could not stop the nightmares. “You’re not going to get anywhere if you acknowledge fear,” she says, but she admits that after the danger is over, she feels it. It is surreal to see her back in London at an elegant gala event, picking up another journalism award in between trips to war zones where she has to maintain enough distance from the carnage all around her to write about it – and keep from becoming part of it. The contrast in perspective and priorities between Colvin and her editor (an excellent Tom Hollander) makes a deeper point about the uneasy and sometimes conflicted relationship between editors trying to sell papers and reporters trying to get the story read.

To the extent we need to know why she had this compulsion and whether she missed having a home and family, those elements are present without being reductive or simplistic. We see her casual dismissal of being blinded in one eye with her friends and then we see the way she looks at her face in the mirror when she is alone. She impulsively asks her ex-husband to take another chance on marriage and children, and he gently explains why that is not possible. in the mental hospital where she is being treated for PTSD, Colvin gives what she calls the “psychobabble” explanation of her need to be in war zones to her closest colleague, the photographer Paul Conroy (Jamie Dornan, unrecognizable under a thick beard). Her father this, her mother that, but really it all comes down to what she said in the first place: she wants to make other people care about people suffering tragic and unjust events on the other side of the world. To lift her spirits, she wears ultra-expensive La Perla lingerie under her flack jacket, airily explaining, “If anyone digs my corpse from a trench, I want them to be impressed.”

“I see it so you don’t have to,” Colvin says. No, she saw it, and wrote about it, so that we would see it, too. As a documentarian, Heineman shares Colvin’s commitment to telling stories the world too often would rather not see. He has a strong sense of time and place and keeps the story compelling without letting the audience become desensitized by tragedy. Watch the subtle changes in technology over a decade of war reporting and feel a pang at the loss of print journalism robust enough to support reporters like Colvin who will risk everything to tell the story. 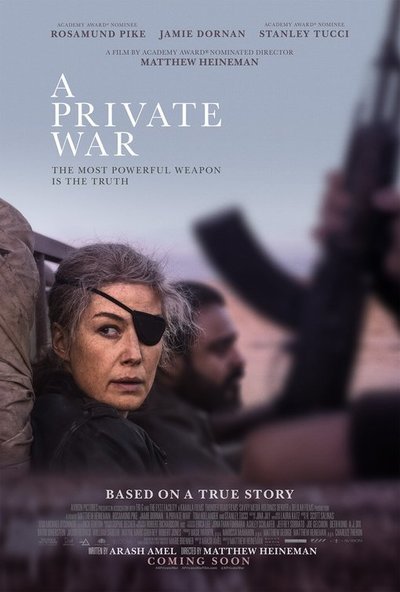