“A Kid Like Jake” tackles the tricky topic of gender dysphoria with sensitivity and grace.

It roots its family’s confusion in a recognizable, present-day reality, which perhaps could make this complicated subject matter relatable—or at least accessible—to viewers who might never have had a reason to consider it. And the fact that the central figure is a 4-year-old kid bound for kindergarten somehow heightens the simplicity and purity of the film’s message: This is someone who wants to be seen and loved for who he truly is, which he expresses in the most fundamentally human way possible.

Director Silas Howard and writer Daniel Pearle (adapting his own play of the same name) depict the routine of mundane daily life for this Brooklyn family in understated ways, from bath time to packing up the lunchbox and everything in between. But because they handle so much of the meatier material with such decency and honesty, it makes you wish they’d gone deeper emotionally and let us get to know Jake a little better for ourselves.

Jake (Leo James Davis) seems perfectly happy at preschool wearing tutus and playing Cinderella in the dress-up corner. This is a kid who has the entire Disney princess collection on DVD and wants to go as Rapunzel for Halloween. Jake’s mother, Alex (Claire Danes), who put her career as a lawyer on hold to be a stay-at-home mom, assumes this is just a phase and doesn’t think there’s any cause for concern. But Jake’s dad, Greg (Jim Parsons, who’s also one of the film’s producers), is a therapist. And as reports from the school principal (Octavia Spencer) about Jake’s outbursts and stubbornness become more frequent, Greg believes having his child see a psychologist could provide some guidance.

A quietly simmering anxiety comes to a boil as Alex and Greg thrust themselves into the fraught process of applying for private schools. “A Kid Like Jake” vividly depicts this most bougie of ordeals: the campus tours where all the couples look alike and radiate the same thrum of anxiety, the cutthroat competition, the naked striving. This is something that should be easy but it’s not—especially in a place like Park Slope. Spencer, with her trademark warmth and wisdom, cleverly suggests as Jake’s current principal that Alex and Greg use the fact that their kid is a little different as a strategy to stand out from the rest of the pack. Mom and dad want their child to end up somewhere that’s flexible and forward thinking. And yet, there Jake stands at that first school interview, every bit the proper little man in a blazer, buttoned-down shirt and tie.

“A Kid Like Jake” wisely comes at this child’s current state from a variety of angles, not all of which are sympathetic. Friends and family members might mean well—or at least tell themselves they mean well—but end up saying something inadvertently dismissive or demeaning. The always-great Ann Dowd, as Alex’s judgey, passive-aggressive mother, tries to impose her will on everybody all the time, but eventually reveals unexpected complexity to her character. Priyanka Chopra, as Alex’s good friend and the mom of one of Jake’s schoolmates, might not be as trustworthy as she initially seemed. People are imperfect.

As Jake’s parents, though, Danes and Parsons have an effortless, evolving chemistry that’s always compelling. They enjoy an easy banter with each other at the film’s start, which gives way to more prickly exchanges as the story grows more complicated. Despite being super-liberal and LGBTQ-friendly, they’re not always nice to each other when it comes to their own child, a realistic manifestation of the increasing stress they’re under. And the climactic fight in which they finally have it out and say all the hurtful things they’ve been holding onto is just brutal to watch. It’s raw, painful and honest and—above all—necessary.

But while we get a great sense of these characters and how the dynamic of their marriage changes, we don’t see or hear much from Jake himself. He is an idea that is discussed, dissected and endlessly debated, but he’s depicted visually in fleeting images and gauzy lighting. And a subplot involving Greg and a therapy patient (Amy Landecker) who’s having marital troubles of her own is well acted but feels like a distraction.

Still, “A Kid Like Jake” has a real shot at opening up some hearts and minds—or at least making folks see the world in a slightly different way. 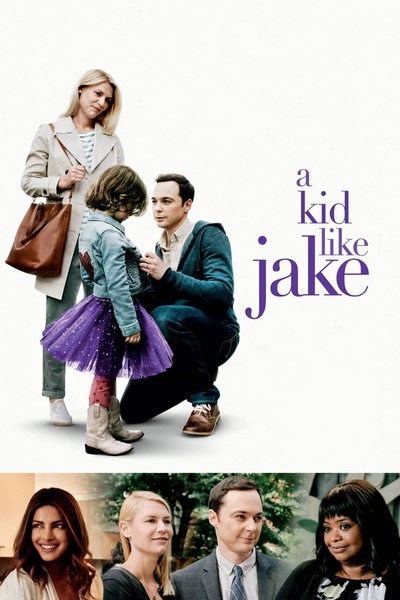 Writer (based on the play)