“A Beautiful Planet” is a 49-minute documentary made partly by amateur cameramen, but like previous IMAX-produced shorts, it is fine blockbuster filmmaking. Similar to “Gravity” or “Avatar,” it offers viewers experiences that can only be seen in large scope storytelling, this one coming with the budget of NASA trips to the International Space Station. Its lead characters and cinematographers are the astronauts who share with us their workday, in and out of the office, and the endlessly fascinating view they have outside their windows.

Treating its title very broadly, the movie goes in many different directions. It wants to be about the formation of the planet, its current state, and careening future. On top of this, it wants to focus on life for various astronauts in the International Space Station, which does provide a metaphor for Jennifer Lawrence's narration: "A truly awesome example of what we can achieve when we work together." The overall package is a bit scattered editorially, but it does serve a greater purpose: to share excitement about the Earth, and further stoke any interests in not destroying it.

The footage captured is, of course, spectacular. Wide overhead shots of entire planetary regions take precedence over talking head interviews, as Myers shows us the world in day and night, we hear the voices of astronauts sharing their observations below. The light of South Korea dies at its border with North Korea. In daytime satellite views, Earth is shown nakedly in its land formations, with Africa’s vastly depleting greens, or a dry, carved out California. These satellite images are seamlessly mixed with animated explorations into the Milky Way and beyond infinite, with “A Beautiful Planet” leaving us with the possibility of life elsewhere on another planet called Kepler-186f, 490 light-years away from Earth.

The film has a curiosity as a type of NASA PR moment, like an exercise in providing the most accessible piece of educational entertainment possible within 49 minutes. It’s constantly bidding for your awe, as when mixing astronauts talking about their daily lives up above (washing their hair, trying to make espresso, exercising, all of them fascinating anti-gravity feats) with their observations on the world below. You can also hear the producing too, as when the narration frames global warming as something that will directly affect the lemurs’ habitat (already a subject of their 2014 IMAX short, “Island of Lemurs: Madagascar”), or using New Orleans as a loaded example of a city that will flood from a rise in the sea-level.

Jennifer Lawrence's voiceover guiding is in a way soothing, perhaps too soothing. Her voice is kind to the ear as always, but her personality minimized. Instead of inspiring a sense of awe, it's more about getting the information with a name to put on the poster in the process. It brings to mind Leonardo DiCaprio’s similar voiceover work for Myers' previous “Hubble 3D” IMAX doc, which sounded as instructional as his exposition moments from the first-half of Christopher Nolan’s “Inception.”

There is a difference between reading there are an estimated hundred billion galaxies and to feeling like you have seen them, while understanding you're just a grain of sand among it all. “A Beautiful Planet” achieves this unique sensation with a perspective that alternates between a massive and minute scope. It is a blockbuster experience of the God’s-eye view. 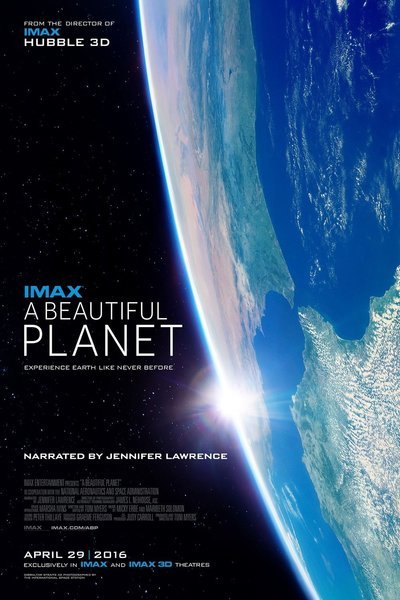