There’s more atmosphere than plot in the Romanian drama “Intregalde,” a moody parable that sometimes feels like the Eastern European arthouse response to “The Texas Chain Saw Massacre.” The main difference between these two movies is that “Întregalde” doesn’t have a flesh-eating villain like Leatherface haunting its title location, or an abandoned saw mill at the end of a treacherous, uneven, and totally secluded road. Instead, viewers spend time with a group of increasingly desperate and only lightly likable protagonists—a trio of humanitarian aid workers from Bucharest—after their SUV gets stuck in a ditch on their way to drop off a disoriented elderly hitchhiker (Luca Sabin) at Întregalde, his final destination.

Writer/director Radu Muntean’s drama (co-written with Alexandru Baciu and Razvan Radulescu) mostly concerns these three lost city folk and their tortured thought process as they decide whose needs need looking after most and what to do about it. Imagine a horror movie that’s less about a singular threat and more about the anxiety of not knowing what you should be doing. Instead of fleeing from a homicidal killer, Muntean’s protagonists have to cope with extreme weather, a lack of cell phone service, and a persistent clash of personalities. Instead of a nightmare, Muntean and his collaborators present a pseudo-naturalistic stress dream.

Shot by cinematographer Tudor Vladimir Panduru, “Intregalde” presents the area surrounding the mill as a romantic, not an idyllic landscape. In a romantic environment, everything clings to you and reflects back your own isolation. Mud, dead leaves, frost, mist, and the night sky all congeal and threaten to weigh down the unwary. There might be wolves prowling around in the dark. There’s definitely a bunch of standoffish woodsmen; they speak Romani to each other and offer the sort of advice that only further startles our already edgy protagonists (ex: “the young lady should come with us”).

It’s tempting, in this wispy scenario, to relate or even identify with the main characters. Dan (Alex Bogdan) is the least sympathetic of the group, being short-tempered, hungover, and pouty. Ilinca (Ilona Brezoianu) doesn’t have as much of a presence, but she’s at least relatively pleasant. Maria (Maria Popistasu) comes out the best of the bunch since, of the three aid workers, she advocates hardest to look after the rambling and disoriented Mr. Kente (Luca Sabin), whom they almost run into in the middle of an unpaved road.

Still, the murky terrain that these characters find themselves in often speaks louder than the individual characters, all of whom are way out of their comfort zone. Mr. Kente also seems lost, as if he’s spent too much time waiting for somebody to turn the lights back on. Unfortunately, the only illumination that Maria and her group can provide comes from their jeep’s inner cabin, and that yellowish-brown glow only looks good when compared with the surrounding darkness.

For food, the Bucharest trio have ration packs filled with bland non-perishables, particularly a bag of sad-looking orange corn puffs. For conversation, there’s Dan, who’s always whining and making unwelcome comments. “You are lucky they didn’t sodomize you” Dan says, speaking of the above-mentioned local woodsmen. Mr. Kente also rambles like Abe Simpson’s Slavic cousin (“nobody could match me with a crosscut saw”). Maria gives a Xanax to Mr. Kente; some viewers might wish she dosed Dan instead.

The scariest thing about “Întregalde” could also be the most alienating: everything and everybody moves at a pseudo-naturalistic pace. Muntean asks viewers to join Maria’s group as they struggle not only to communicate with the outside world, but what to do about Mr. Kente. Dan abandons him at the abandoned sawmill, because that’s where the old man says he wants to be. Besides, as irritating as Dan may be, he's partly right when he insists that there’s only so much that he can do for Mr. Kente if the older man wants to stay in the middle of nowhere. In time, it becomes clear that Kente’s the real object of the movie’s soupy allegory. What’s to be done with a stranger whose apparent need matches his off-putting presence? And what good are humanitarian ideals if they can’t transcend a dismal reality?

Muntean and his team provide some tidy answers to these loaded questions, which also might be why “Întregalde” sometimes resembles a horror movie. I don’t think it’s unfair for a film that’s so packed with existential dread to have a point beyond exhausting you and then asking you why that experience made you uncomfortable. But there also doesn’t need to be a deeper meaning to a nightmare as long as it still leaves you worrying about what just happened. 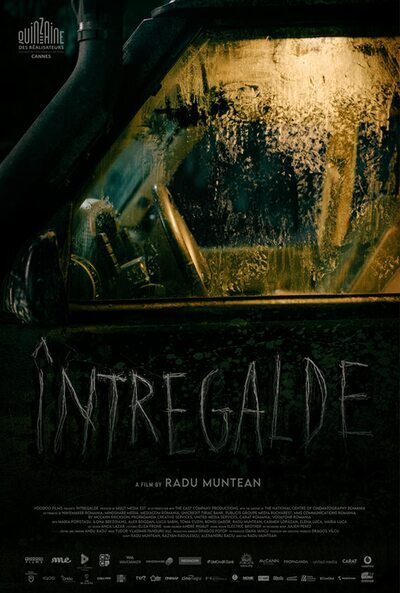