“4 Minute Mile” at least has the decency to acknowledge that it’s aware of its underdog sports-movie clichés, especially the ones that made “The Karate Kid” such an ‘80s classic.

Kelly Blatz, as a troubled but talented high school runner named Drew, doesn’t understand why the aging, alcoholic coach Coleman (Richard Jenkins) makes him perform all kinds of manual labor when he should be training him for the regional track meet. Among the grueling work that Drew is forced to endure: Sanding the coach’s dilapidated boat while coach himself sits back and enjoys yet another cigarette. “Wax on, wax off,” Coleman says with a wry smile.

Director Charles-Olivier Michaud and writers Josh Campbell and Jeff Van Wie use this rare moment of humor to say what we’re all thinking as viewers. Yet the filmmakers remain unrelenting in running through a checklist of genre conventions. There’s the good-hearted kid from the wrong side of the tracks, the mentor seeking his own redemption, the trash-talking competitor, the mom struggling to keep her family together and the sweetly supportive girlfriend. And the montages—oh, so many montages. “Even 'Rocky’ had a montage,” to quote a song from the great “Team America: World Police.”

Still, “4 Minute Mile” is efficient in its storytelling—which is fitting, given that it’s about a sprinter—and Jenkins and Blatz have solid chemistry with each other. To the surprise of absolutely no one, Jenkins enlivens this well-worn material through his sheer presence, his intelligent choices and the emotional truth he brings to even the most obvious scenes.

He’s got his work cut out for him, though, given the hammy lines he’s saddled with as his character steadily spouts inspirational nuggets. “Running is not just physical. It’s in your head,” Coleman says when he first agrees to train Drew. And in a repeated theme involving running through your inner demons: “If you do face that fear, it’ll change your life.”

Drew already has faced a lot of hardship at a young age. His father died when he was a child; 10 years later, he and his brother (a muscled-and-tatted Cam Gigandet) and mother (a blowsy, barely-there Kim Basinger) are struggling to pay the mortgage on their working-class Seattle home. Older brother Wes, who’s on parole, ropes Drew into dropping off cash payments to a seedy local drug dealer. Clearly, this arrangement won’t end well.

But there’s hope for Drew. He’s fast. He gets kicked off the high school track team for being mouthy but maintains a flirty friendship with fellow runner Lisa (Analeigh Tipton, who has an off-kilter likability but is stuck serving as a cheerleader). Coleman sees something special in Drew and offers to teach him everything he knows—granted that he changes his event from the 440 to the mile, and that he strives to run that distance in a punishing four minutes. And as it just so happens, just as Drew is in need of a father figure, Coleman is in need of a son. His own boy—who was a talented runner himself—was killed in a car accident. It’s all extremely formulaic and convenient.

Like Mr. Miyagi, Coleman is sad, lonely and alone and he drinks heavily to numb the pain. There’s a mystical quality to his self-imposed isolation. Do you think it’s possible that by working with this surly kid, it will improve both of their lives?

First, though, Drew has to agree to Coleman’s unorthodox training methods, which include running 15-second sprints through ankle-deep water, dragging a giant tire from one side of a swimming pool to the other and doing quarter-mile laps around the docks instead of at the slick and shiny track. In one artfully lighted montage after another, Drew runs around his neighborhood, at sunset, through the city streets, across parking lots and in slow motion.

Despite its overly familiar trajectory, though, “4 Minute Mile” is nicely understated, and surprisingly not as mawkish as the material might suggest. Michaud depicts the blue-collar Washington settings vividly. And while Blatz is a bit of a handsome, blank slate aside from his character’s sullenness, he’s believable in his physicality—which is crucial given that he’s running, or talking about running, or planning to run nearly the entire time.

If only his destination were more of a mystery. 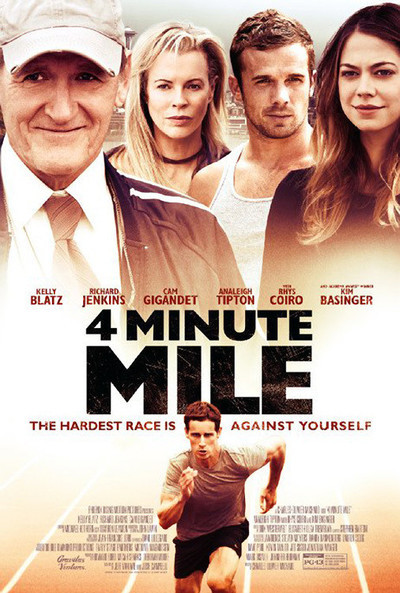 Rated PG-13 for mature thematic material involving violence, drinking and drugs, and for smoking and some language