I didn't bone up on my ancient Greek history before seeing 2006's "300," nor did I do so before seeing its new followup, "300: Rise of an Empire." Not because I feel that such research is above my pay grade, but because no matter how much research the filmmakers might say went into their subsequent visions, I know that realism and/or actual accuracy was scarcely Job One for them. That being the case, though, I was ill-prepared for the fact that "Rise of an Empire," which is not so much a sequel to "300" as a companion piece (given that it depicts events that happen simultaneously to those depicted in "300." For example, the titular number of feisty, cut Spartans getting [spoiler alert!] slaughtered by a bunch of fey Persians of larger numbers), opens with an action montage accompanied by maybe twenty minutes of expository voice-over. Or so it seems. And for all that, I didn't get much of a sense of historical narrative from the movie.

There's one Greek fellow, an Athenian, who believes in the "experiment" called "democracy," and he wants the Spartans to back him up as the fey Persians, spurred by possibly homosexual golden (literally!) boy Xerxes, come to lay waste to his model city. They're coming by ship, and the navy is commanded by the golden boy's sister, Artemisia, played by the sexually intimidating Eva Green, who's going Full Diamanda Galas here, only without the singing. And this naval commander, an unusual one by anybody's standards, is both intrigued and vexed by the Athenian, who goes by the name Themistocles, and is played by a stalwart Sullivan Stapleton.

While the first "300," based on a graphic novel by Frank Miller, was relentlessly male-driven in a way that was both relentlessly homoerotic and blithely homophobic, the introduction (no doubt historically inaccurate) of Green's character to the combat changes the sexual dynamic in a way that's pretty ridiculous and also kind of jaw-dropping. I hated the Zack-Snyder-directed "300" with a passion: aside from its in-your-face hateful war-mongering sentiments and the aforementioned homophobia, the thing looked as if it had been shot through lenses that had been smeared with dog feces prior to each take. "Rise of an Empire," directed by Noam Munro (who also made "Smart People," which clearly established his 3D action movie bonafides…no wait…) is entirely more engaging by dint of being absolutely impossible to take even a little bit seriously. The ruthlessness of Green's character is taken to extremes that meld Medea to the cheesiest serial you can name, and is hence delicious.

The rest of the film's over-the-topness is pretty purposeful as well. Every time a sword swipes a battling warrior, the screen fills up with a lake's worth of spurting blood, to the extent that you really start hoping that one of the film's character's suffers a paper cut, just to see what happens. Also, the color palette here is more expansive than in Snyder's original: in addition to dun, there's also a lot of blue, a dark gray, and lots and lots of crimson. Is there intelligent dialogue, or anything actually emotionally stirring? By my lights, no. But in terms of sheer bloody spectacle, "300: Rise of an Empire" gets a lot of mileage out of sheer venal spectacle. Just don't try to derive a history lesson from the movie. 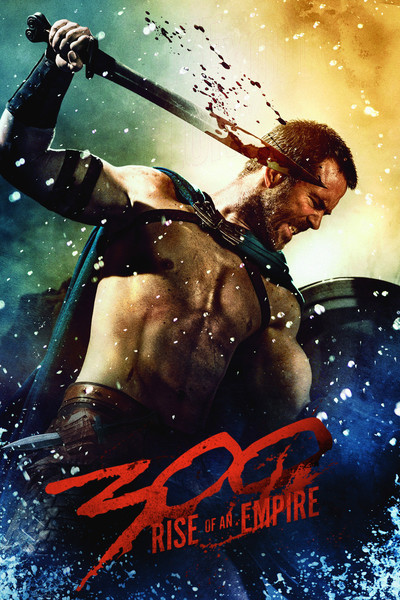