Playing cat and mouse with kidnappers can be a grisly and awful business even if­—or maybe the phrase should be “particularly if”—the kidnappers are dumb as dirt. That’s one of the takeaways of “24 Days,” a well-engineered suspense drama from France directed by Alexandre Arcady. The movie, starring Zabou Breitman, Jacque Gamblin, Pascal Elbé, Sylvie Testud, and Tony Harrisson, has a more upsetting dimension than most suspense dramas as it’s based on a true story, a story that touches on issues still roiling France today.

The movie begins with Breitman, in the role of Ruth Halimi, directly addressing the camera, and asking, “How could this happen in France in 2006?” The kidnapping of Halimi’s son, Ilan, is what happened to begin with. Arcady shows Ilan’s family preparing for a group meal and going into loud shock on learning of Ilan’s abduction; particularly searing is the photo of Ilan with his eyes and mouth duct-taped, with a gun to his head. Ruth and her ex-husband Didier (Elbé) go to the police. The head of the investigation, Delcour (Gamblin), is competent and highly invested, as is his crew, as is the psychologist/negotiation expert Brigitte Farrell (Testud) who works with Didier on the phone calls from the ransom-demander whose name they don’t know yet. His minions, underclass kids of all ethnicities, know him as “Django,” and they don’t dare cross him.

But Django, whose real name is Fofana, and who shuttles between Paris and his ancestral home of the Ivory Coast of Africa, isn’t quite as much of a mastermind as he conceives himself. His original scheme was to kidnap a Jew, a strategy borne not so much out of race hate per se (although it’s there) as a conviction that, good grief, “Jews have all the money.” Not only do they have all the money, but also they stick together and bail out their own. As it happens none of the Halimis are rich, or even particularly affluent. But Fofana’s accomplices are pretty dim, and pretty sadistic. And as the captivity drags on, Ruth is reminded of the case of Daniel Pearl. When Fofana taunts the victim’s parents with a reading from the Koran, it’s a particularly sick-making moment.

Arcady’s direction is tight and efficient throughout (the second unit was handled by Alexandre Aja, a former protégé of Arcady—his son, to be precise—who’s made an, um, interesting career in American horror pictures) and overstated at times, although by Hollywood standard his modes of overstatement (slow motion shots of characters turning around as they make sudden terrifying realizations, and so on) are almost subtle! But his handling of the story’s very ugly twists and turns, particularly as the appalling Fofana grows more truculent in his demands, is unimpeachable. As for its social analysis, it’s tough for non-residents of France to judge it. It’s pretty clear that the film falls squarely on the side of Ruth, who campaigned for the authorities to acknowledge that anti-Semitism was at least an aggravating factor in the case. And of course anti-Semitism is a French cultural issue going back to even before the Dreyfus case. These days the country has immigration, so-called radical Islam, and other factors in this mix.

The finale of the movie could arguably be said to offload the anti-Semitism concern onto a non-French-born person of color, which may strike some social-justice-sensitive types as…what’s the word?...”problematic.” Sometimes the problem with finding things “problematic” is the fact staring you in the face: Fofana the individual did, as it happened, do all the awful things of which he was accused. His last words in the film are “F**k France, bitches,” which, yes, in the context of this presentation are pretty “on the nose.” On the other hand, it sounds like something the real-life Fofana would actually say. What are you going to do? 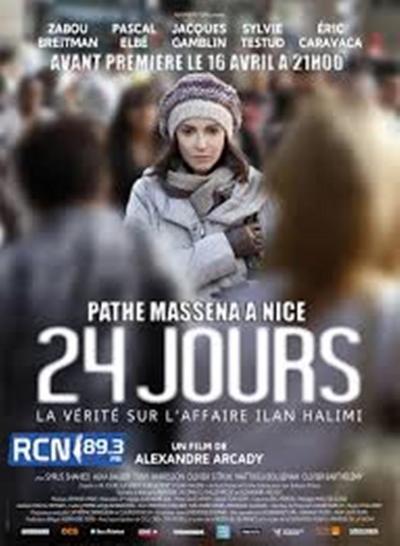