In a new video essay at The Dissolve, Scott Tobias and RogerEbert.com contributor Kevin B. Lee talk about how Terrence Malick's characters talk—in their heads, in our heads. It's great stuff. It got me musing yet again about my favorite American filmmaker, and how he's changed his style over the years while remaining so very Malick-y.

Malick's use of voice-over is his defining trait as an artist—along with his quicksilver editing, of course, which doesn't so much merge with the narration as dance with it. The pictures and sounds are at one with the words, yet somehow they aren't. Somehow they're their own thing. They're heading in the same direction, often in a meandering spiral, like lovers on a dance floor. But they aren't fused. In some mysterious way they feel self-contained, separate.

Malick's voice-over might be the factor that drives some viewers away from his movies, more so than his increasingly nonlinear, improvised-seeming stories. Why?  It's the old "show, don't tell" prohibition, I think. You hear that phrase all the time in film criticism, indeed anywhere movies are discussed: "Show, don't tell." Most commercial films obey it, unless they had production problems and need to paper over their storytelling gaps with "My name is so-and-so, and this is the story of how I ended up the president of a small country"-type narration. This is the laziest kind of voice-over. It tends to sit at the start and end of the picture, enclosing it like sandwich bread.

Other films use narration matter-of-factly and rather aggressively throughout the story, and when they do it well, nobody hauls out, "Show, don't tell." But even when they don't do it well, heavily-narrated films often get a pass from viewers because the voice-over is simple to understand and doesn't ask the audience to hold more than one thought in its head at the same time. There's one narrator, usually, and he or she is giving us information that the scenes themselves might not convey, but without contradicting them, or making us doubt what we're seeing, or ask "Why is the main character telling me this? Why is it important?" 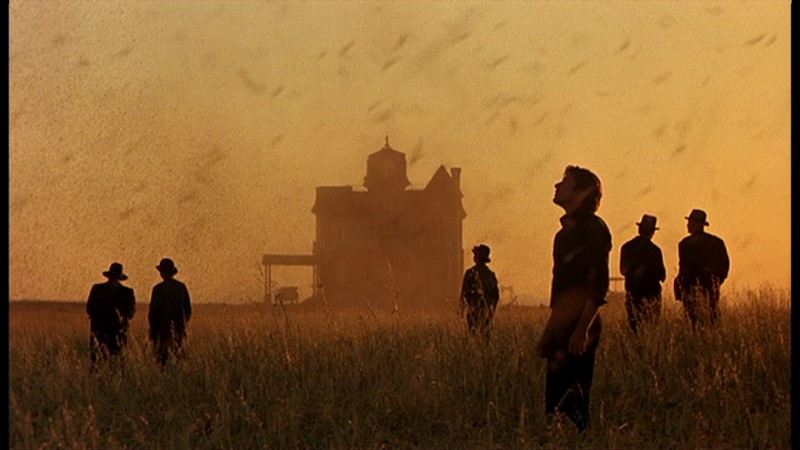 Malick's debut feature, 1973's "Badlands" is a good example of traditional narration with a twist. The voiceover is attributed to just one character, the 15-year-old heroine Holly (Sissy Spacek). Its romance-novel shadings affect how we view Holly and her lover Kit's crime spree. But it doesn't quite contradict anything, or call anything major into question, or otherwise make us doubt the evidence of our senses.

As Tobias and Lee point out—and as I discussed in my own Terrence Malick video essay series for the Museum of the Moving Image—1978's "Days of Heaven" marks the point where Malick's narration becomes more poetic, or abstract, or philosophical; however you describe it, you can feel the difference. It's not running in opposition to the story, but it does seem disconnected from it, purposefully so. You could say that it occurs adjacent to the story. It's funny and poignant because it betrays a profound lack of understanding on the part of its barely-adolescent speaker. Linda Manz's character is more passive than active, just meandering through life as best she can, like her brother and his girlfriend, but with even less in the way of agency. She's struggling to understand the story's central triangle as well as the ebb and flow of American history, minus the tools that might make true comprehension possible.  She's not quite helpless, but she is powerless. The narration's poignance comes from our knowledge that she's just a kid. She's never going to penetrate to the heart of what's happening and what it all means. This makes her less like a typical literary or film character than a real person. Like us.

"Manz’s narration solves practical problems, like giving the audience information about the love triangle at the film’s center," Tobias writes, "but 'Days of Heaven' now seems like an editing-room crisis that opened up new possibilities for what Malick could do with the form. There’s some carryover in tone between Sissy Spacek’s naïf in 'Badlands' and Manz’s more worldly variation here, but Malick allowed himself the freedom to use narration to broaden perspective and open up the audience to more abstract ideas."

Talk about "abstract ideas"! After twenty years in pop culture limbo, Malick finally comes back with "The Thin Red Line," his first film with more than one narrator. How many? Good question. There are so many narrators it's sometimes hard to keep track of who, exactly, is narrating. That Malick cast so many young actors who have a similar look as well as a similar sound seems to be part of the point. The confusion is, if not intentional, then not necessarily in contradiction to the statements the film is making about love, empathy, violence and peace. He's not dealing in characters here, he's dealing in species—as Paul Verhoeven's "Starship Troopers" did, in its own perverse way, a year earlier, picturing an intergalactic feud between visually interchangeable bugs and almost-visually interchangeable humans. "TTRL" is about humankind's war against nature, or more accurately, between humanity and everything else. Walt Whitman, always an influence on Malick's voice, flowers most fully in this film, with its songs of self and leaves of grass.

"A voice from Death, solemn and strange, in all his sweep and power,

Dash'd pell-mell by the blow — yet usher'd life continuing on,

(Amid the rest, amid the rushing, whirling, wild debris,

That's Whitman, not Malick—but Malick probably could've filched it and reworded it slightly without anyone being the wiser, so close are the artists' temperaments.

Voice-over becomes even more lofty and curious in Malick's next movie, 2005's "The New World," which has at least three narrators. Malick goes all-out into cosmic rumination in his next features, 2011's "The Tree of Life" and its smaller but structurally similar followup, 2013's "To the Wonder." With each new work, Malick's stylistic experiments and change-ups become more confounding. Gentle as he is, there is something provocative, even off-putting, in the way that he uncouples narration from picture and sound, to the point where his films seem at once more literary and more cinematic than those of any other American director.

He's telling us and he's showing us. He's telling us something different from what he's showing us. He's telling us that  experience is so powerful, so big, so mystifying, so beautiful, that neither words nor thoughts can do it justice. Eventually all the narration comes to seem a comforting lie that the characters tell themselves rather than admit they know nothing except they're born and will someday die, and the sunset is lovely, and listen to that brook, and those birds, and wow, you're beautiful too.