This is the third chapter in a series of video essays about the films of Wes Anderson, based on my book "The Wes Anderson Collection." I wrote and narrated the pieces; my friend Steven Santos edited.


The voice-over narration is largely drawn from the essay on "The Royal Tenenbaums" from "The Wes Anderson Collection." I've enclosed screenshots of the final edited version below the video.

I have also reproduced emails that Steven and I sent to each other during editing. This hopefully will give people a sense of how the video evolved over time. It might be too much information, but considering that "The Wes Anderson Collection" is about creative choices and how they play into the evolution of style, it seemed appropriate to include the materials here.

For a complete list of every video I've been associated with that has anything to do with Wes Anderson, click here. 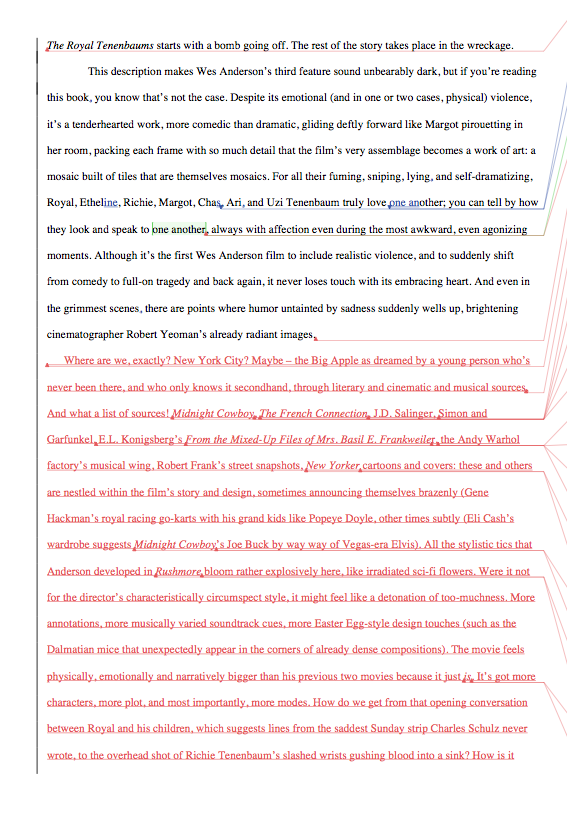 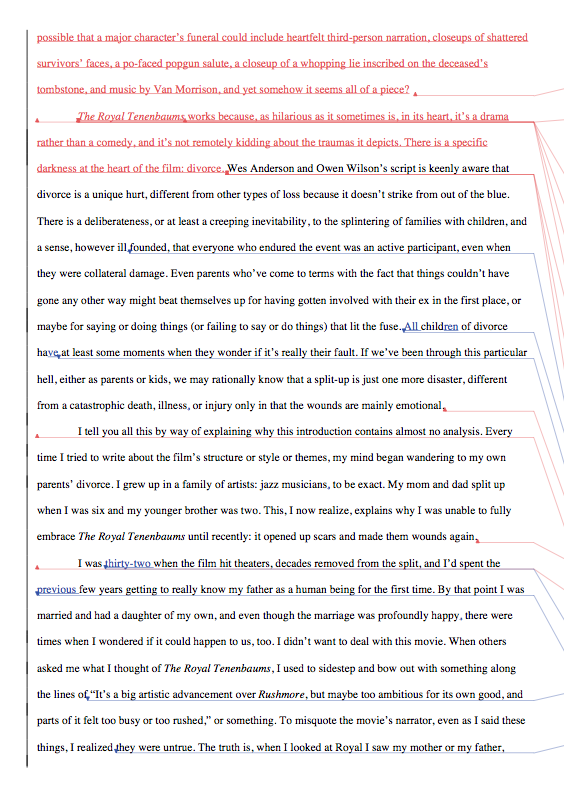 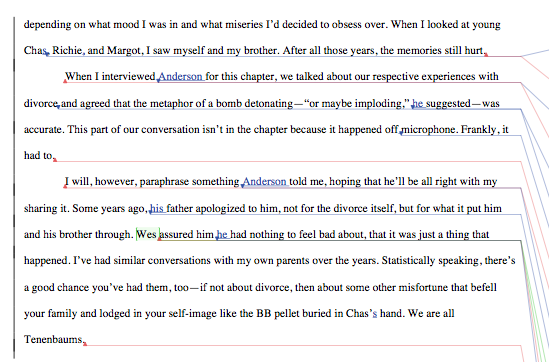 Correspondence between myself and Steven Santos regarding the editing of "The Wes Anderson Collection, Chapter 3: The Royal Tenenbaums."

I cut large portions of this text, particularly near the end, where I couldn't figure out how you could possibly illustrate it!

This one should be heavily concentrated on the movie itself -- the movie as a "thing" that we are looking at, very closely. Make it seem like you're picking a document apart. Use freeze-frames where appropriate and then zoom into them, or cut into a particular face or part of the frame. Like you're doing research or solving a detective story. It's OK to lean on images in the book as well if you feel that they contribute something.

When I get to the list of influences early on, maybe do a split-screen thing -- "From the Mixed-Up Files of Mrs. Basil E. Frakenweiler" placed next to young Margot and young Richie hiding out in the museum in the prologue, that kind of thing. Eli Cash next to Joe Buck from Midnight Cowboy. Etc.

You will probably have to use the soundtrack somewhat creatively here. Maybe we're looking at images from the prologue but we're hearing something else from some other part of the movie? The whole thing can be a little bit montage-y.

Maybe consult the "memorable quotes" page of IMDB to find particular lines that might resonate against lines of my voice-over?

I picture the end section feeling like we're leafing through pages of a family album. Maybe you're freeze-framing moments and making them look like snapshots or Polaroids or something? Is that possible? I feel like that final stretch needs to verge on abstraction, to go beyond the literal, you know?

Just based on reading the script and not being able to listen to the VO until I get home, I assume what you cut out was some of the more personal stuff about how the film reminds you of your own family. When I was reading that, the best way in my mind to show that was obviously actually including photos of your family, particularly when you were young. Not sure how much of that is left in, but I'm just putting that out there. Would understand if you didn't want to visually go there.

The Polaroid snapshot thing can be done. If I have a little time to experiment, I can do something with the last part of the essay. As I said, I can get back to these tomorrow and get Bottle Rocket done in a few days and Tenenbaums by the end of the weekend, which would give us the first 4.

Feeling good about these. I'll let you know if there's any issues.

Yeah, I feel like going there makes it about me, and I'd rather not make this one about me. Plus if you show pictures of little Matt and his brother, it's all about the wide-lapeled shirts and we kind of forget about the movie.

Agreed. I would lean towards making it more about the movie and sparing the world the sight of your wide-lapeled shirts.

This might be my favorite chapter so far. I love what you did with the photos.

1:00 -- cut from my VO saying "more comedic than dramatic" to Etheline saying, "Henry, I have no interest...." Get into the pratfall faster.

1:15 "Packing every frame with such detail...." Rethink this section.

2. Drum set zooms out to reveal that it is "attached" to two more annotated insert shots (these tend to be short so you will have to either slow them down, loop them or maybe freeze-frame them to extend them out)

3. Keep zooming out, or simply cutting to a "wider" image of still more  insert shots, so that the screen looks increasingly like a checkerboard pattern

4. Add in some overhead God's eye insert shots that are not annotated -- the check in the prologue for example, or the cover of the New York Times Magazine with Eli cash on it

At some point my VO will disappear...crank the music and just go to town with the mosaic thing. The idea is to visually illustrate that "too-muchness"

Maybe it climaxes with the climax of "Hey Jude"?

When you go to Royal (currently 1:30 in the timeline though this will of course change) we should be done with Hey Jude. We don't hear it again. Use some other music....You could maybe use the Charlie Brown song  that plays in the malt shop scene as a montage base, before and after that scene?

2:18 if this is "silent" footage, can you add "water balloon impact" and a passing car sound?

Maybe let the video essay play out with whatever music happens to be under the scenes. Let the "suicide note" scene go without music as it's more effective that way I think.

Then at approximately 3:00 use a little bit of my grandmother's music for montage purposes, a cue you you didn't use in one of the other video essays....the ones that start at 5:24 and 9:18 are nice I think.

I like the music choices from that point forward.

When Margot is getting off the bus, crop in on her and split-screen with footage of Nico performing that song on some old variety show if you can find such footage...if not just leave as-is.

4:05 "I know you asshole!" Wes says in the interview that he stole that line from "Witness," the scene right after Harrison Ford gets shot I think. Can you get that scene via bittorrent or from a friend? I could order it for you on DVD if you like, I can probably get it really cheap.

I think if you do the "Witness" comparison it should be the punchline to my saying that some references come through brazenly, others subtly.

5:15 we don't need to hear any lines from that scene...we already saw it at the start of the video essay...just jump ahead to the next thing, the shot of the blood gushing into the sink.

Right now, I'm sending you the restructured Bottle Rocket which I worked on yesterday.

At the 1 minute mark, I already swapped out the scene with Henry falling and put in the scene where Chas gets shot with the BB gun, as I do feel that needs to be at the beginning to set up the final lines of the piece. i could put the other scene back in, but I realized earlier today that Chas getting shot does need to be in there and that seemed like the right place.

I have "Witness" and it is the scene when Ford gets shot, so I'll put that in.

I'll probably deal with trying to address these throughout the week, as I'm working on Fantastic Mr. Fox now.

I'm working on Tenenbaums tonight. If you have any VO you want to re-record and send to me, let me know.

Also, I don't know if you get notified when the Ebert account is sent Vimeo messages, but, since I'm logged in from home, I saw that someone from Portugal sent a message about wanting to air the series on some cable culture channel there. How legitimate it is, I don't know, but just passing it along in case you didn't see it.

Only a few little things at the beginning...the rest sounds fine. I feel like any technical issues I have with regard to peaking are compensated by the emotion in the VO.

I'm proud of the whole series but especially of TENENBAUMS and DARJEELING, which I think are really special.

Got your VOs. Outside of plugging them in and doing a sound mix, I am nearly done with this. Spent most of the night doing revisions and a bit of a re-design. Look in the attachments for Polaroid and End Credits stills. Also sent you a third still for a good laugh. 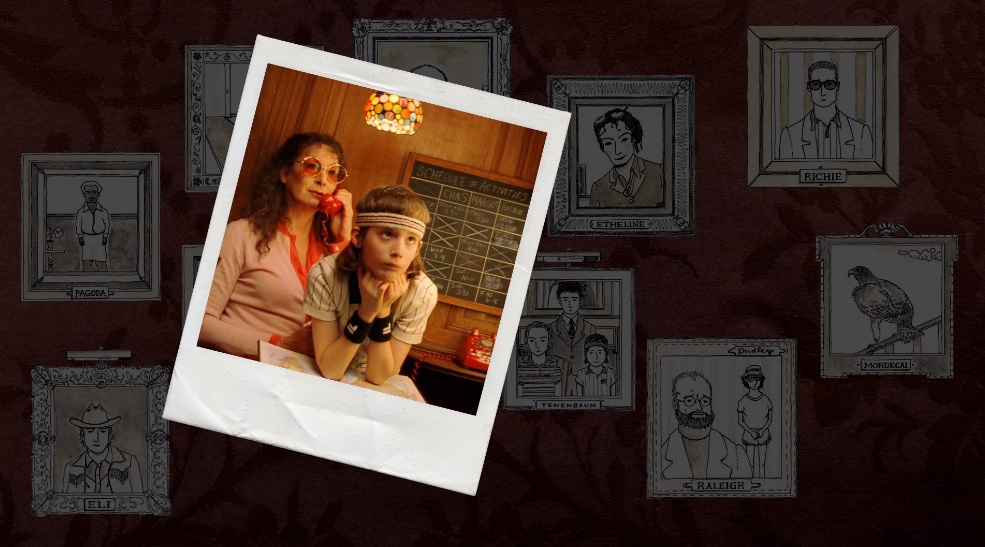 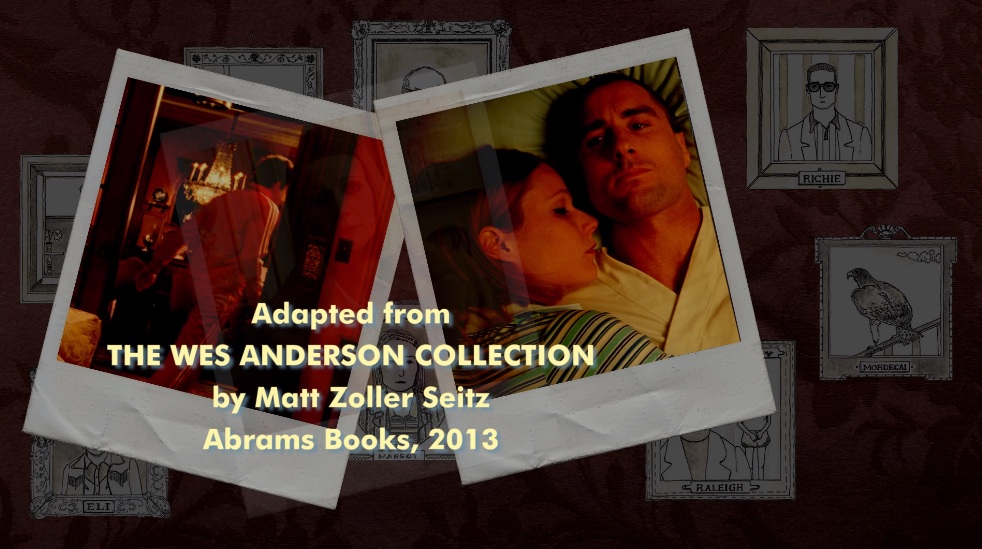 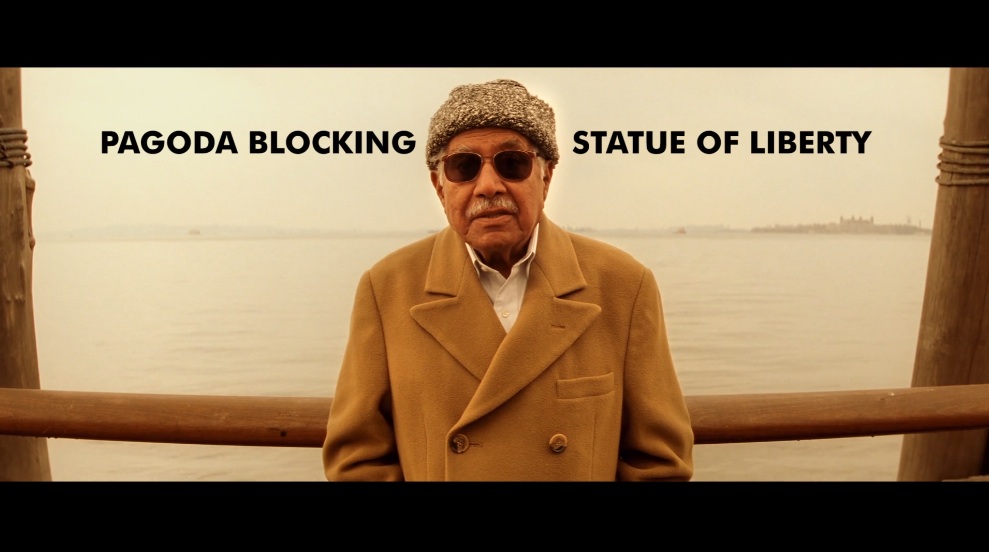