Greetings! My name is Matt Zoller Seitz. I'm the new editor of RogerEbert.com.

With the blessing and generosity of RogerEbert.com's publisher, Chaz Ebert, and the support of the amazing staff at Ebert Digital, I'll oversee the site's content: reviews, interviews, video essays and everything else. I'll also write regularly for the site's Reviews section and post at my personal blog, MZS, which you're reading now.

"Who the heck is this MZS guy?" you rightly ask. "And what has he done?"

You can figure that out by reading my contributor's bio, or by checking out my writing for Dallas Observer, New York Press, The New York Times, Salon and New York Magazine, where I will continue as television critic; or by watching the video essays I've made for Press Play, The Museum of the Moving Image, and The L Magazine.

I'd rather introduce myself to you by telling you where I'm coming from.

My daughter, a budding filmmaker who's studying movie production at an arts high school in Queens, started reading film criticism seriously about six months before Roger's passing. On learning of his death, she asked me, "What made Roger different from other critics?" It was a question so simple that only a young person would think to ask it. I told her, "Roger was a good man and a great critic. But he was not just a man, or a critic. Roger Ebert was an idea."

"What was the idea?" she asked. These kids and their follow-up questions.

The idea, I told her, was that the critic's great calling — beyond reviewing movies and putting them in a wider context — was to stir the reader's interest in learning more, and in so doing, deepen the relationship between the medium and its audience.

"How did Roger do that?" she asked. These kids with their reasonable follow-up questions.

I told her that while Roger could hold his own in a discussion with film academics and theorists, and had been known to spend several days breaking down particular films scene by scene before an audience, he never wrote his reviews in a way that made it seem as though the main point was to prove how smart he was, or to position himself in relation to other critics.

He knew that most filmgoers are primarily interested in a movie's values and emotions, and that if you can't connect with them on those levels — moral/ethical and emotional — none of them will care what you have to say about the film's politics or aesthetics, its relationship to genre, its significance as an example of this or that historical movement, or anything else. 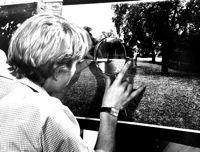 This, to my mind, is the greatest of all Roger's many impressive accomplishments: he took cinephilia — the intense movie love that previously tarred its practioners as anti-social toadstools wasting away in dark theaters — and made it seem normal and fun.  This is the mentality of a great teacher, the kind who gets you excited about subjects you never cared about before. Roger once said, "What I believe is that all people should remain two things throughout their lifetimes: curious and kind."

RogerEbert.com did that, too, and will continue to do it.

Roger is gone, but the idea of Roger is as strong as ever.

This site will go on being what it has always been: a nexus point for movie love and appreciation. Most of its regular features will continue, and there will be as much continuity as it's possible to have. Chaz's Blog will file dispatches about films, festivals, and life after Roger. The Far-Flung Correspondents, Roger's international cadre of writers, will keep publishing an eclectic array of dispatches, from video interviews with the stars of "Before Midnight" to features on The Museum of Modern Art's new Chinese documentary series (which Far-Flunger Kevin B. Lee helped curate). Balder & Dash, the site's catch-all section for whatever doesn't fit elsewhere, will keep running spirited pieces, such as Ali Arikan's essay arguing that the new Star Trek films should concentrate on Mr. Spock, and this book excerpt in which Guillermo del Toro talks about the greatest horror film you haven't seen, and this review of the new Criterion DVD of Mike Leigh's "Life is Sweet," which argues that the heart of Leigh's genius lies in his appreciation of faces, not words.

But we're going to change things up, too. As the weeks and months roll on, there will be more accessible, provocative writing about genre movies — science fiction, horror, action, noir — and thoughtful pieces on race, feminism and representation in popular culture. There will be original video essays, and a podcast, and video roundtable discussions about film and TV. We'll start new blogs and inaugurate new regular features, the first of which, the daily links roundup "Thumbnails," went up this morning. And if we're lucky, we'll get more illustrations and animated shorts from Krishna Shenoi.

This is my promise to you: as long as I'm editor of this site, not a week will pass without your reading or seeing something here that shows you movies and life from a fresh angle, and makes you want to join our conversation.

I hope you'll click on the links in the preceding paragraphs. They'll give you a taste of the diversity of opinion and style that Roger encouraged. He didn't want people to think like him or write like him. He just wanted people to watch new things, think about what they'd seen, talk about it with others, and continue to seek out the new.

We did. And we will.