Matt Zoller Seitz July 12, 2014
Tweet
Editor's note: My friend J.d. Zeik, screenwriter-producer of "Ronin" and "Witchblade," wrote this remembrance of the time he hung out with actor Dave Legeno, who was found dead last Sunday in Death Valley, Ca. Legeno came to acting later than some, following stints working at demolition sites and as a professional wrestler. He got his first screen credit in "Snatch" and was best known for his recurring role as Fenrir Greyback in three "Harry Potter" movies. For more about Legeno's death, read the L.A. Times story here.
Advertisement

One of the things about working within the film industry, no matter what level you’re at, is that it sometimes involves traveling to distant places. If you’re a mid- to low-level screenwriter, these trips, with their first class tickets and cash per diems, happen just often enough that you feel they should be happening all the time, and infrequently enough that each time they occur you suspect it may be the last. For those at the top of the film food chain I imagine this is not the case—they expect to travel in this fashion, and can’t conceive of a time when their lives won’t work this way. I know of an actor for whom first class tickets weren’t good enough; nothing but a private jet would do. At the premiere of a movie the producer, who had to fight to get that private jet to deliver his actor, saw the star and jokingly said, “What are you doing here?”

It didn’t go over well.

That’s the thing about the upper echelons of the entertainment business. Success often (though far from always) breeds a kind of entitlement that can change a person profoundly. And to be honest, when you are in the moment of being the hot or new guy around town, it’s very easy to have it go to your head. To paraphrase William Goldman, when people start telling you stupid shit about yourself (“Only you, Bill, you and Dostoyevsky”), it is incredibly easy to start believing that it’s true.

But there is another world beneath this place. It's the world of the working actor (substitute writer, editor, camera person, etc., and it’s very much the same thing), the world where people aren’t stars but simply actors happy to have the gig. If they’re flying first class, they’re grateful for the ticket (and if they’re paying for it themselves there’s a very good chance they’re flying coach).

Dave Legeno, the last I knew of him, was one of these guys. 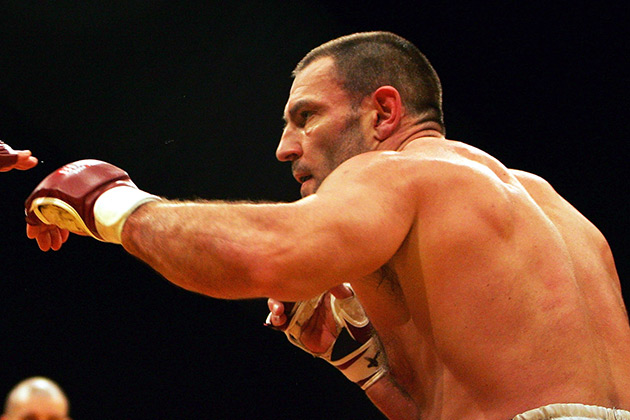 In the fall of 2003 I flew to London to research a project that involved the London underworld. I spent a glorious week immersed in a world that was straight out of "Lock, Stock and Two Smoking Barrels." One of my guides that week was Big Dave, a boxer turned actor, a true sweetheart of a guy who really watched out for me in a couple of very iffy places. More than anything, it seemed to me, Dave wanted to act, and though he hadn't done much at that point he was about to enter a period of his career where he worked constantly, including playing Fenrir Greyback in the Harry Potter movies.
Advertisement

The success of Guy Ritchie’s films (Dave had a small part in "Snatch") had transformed the criminal working class of London (and they really were a working class: crime was a job). Everywhere I went I met people who handed me their card or asked if they could send me their resume in hopes that I’d “put them” in my movie. Completely absent from their understanding of how this process worked was that I had yet to write a script and, even if I turned in a script that the studio loved and decided to make, as a screenwriter the chances that I could get get them into this (or any) movie were none and less than that.

Dave wasn’t like that. As somebody who had a few gigs under his belt, he realized that his career rested firmly in his hands, not mine. Which wasn’t to say that he wasn’t beyond asking me for tips or even assistance (I recommended him to an agent I had at one point, only to have the agent turn him down), but Dave was realistic about what I, or anyone, could do for him. But like all artists who work, he had both the necessary talent and, just as important, the will to continue in the face of rejection. Like me, Dave played the guitar and was an enormous Springsteen fan. “Three chords and the truth!” was the maxim he’d embraced, not his own words (they belong to Harlan Howard), but a phrase that summed up not only the music he loved but his own talent: there was a simplicity to it based on his presence.

What’s funny is that Dave’s basic truth as an actor was that he often played bad guys on screen. Big, in great physical shape, with his closely cropped hair and intimidating presence, his screen self was almost the exact opposite of his real self: in daily life he seemed to be a good natured, soft spoken, very gentle guy (albeit one you didn’t want to fuck with).

The last day of my trip Dave took me to a pub a good hour outside of London so that I could meet “real” guys (Dave was a boxer, not a gangster, but such was his world that he knew many examples of the real thing). Sitting down for drinks (he stayed sober but the other boys were hitting the booze with great gusto), I met guys who had done ten years for bank robbery and the like. These were very hard men, serious criminals who took delight in showing me their guns (booze and guns, how safe), and at one point somebody decided that what I really needed was a free hooker and some equally gratis coke, and no matter how many times I smiled and said no thanks, it wasn't till Dave growled, simply, "Oi," that the subject was over. Sweet as he was, nobody wanted to mess with him.

Yesterday on CNN.com I saw a headline that said “Harry Potter Actor Dies in California Desert.” I was flabbergasted when I opened the story and saw that it was Dave, who had apparently succumbed to heat stroke while hiking in Death Valley. I only ever saw him during my one week in London, while we had spoken on the phone perhaps three times since then, and exchanged perhaps another dozen emails over the years. But I was always sure I’d run into him again, such was Dave’s presence. The world is a smaller place without him.